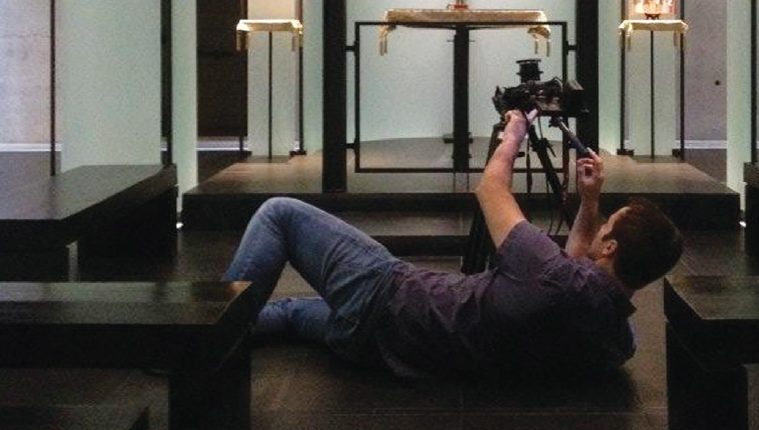 The Life of Documentary Filmmakers In Houston

“We made a little money off of T-shirt and sticker sales and a screen­ing last year,” says Alex Luster, whose three-year-in-the-making documen­tary about Houston street poster artists “Stick em Up!” will be screened again at the Museum of Fine Arts, Houston in early May.

“But it all went to entrance fees for film festivals. “Now we sit and wait and see if we can break even on the film.”

Marian Luntz, MFAH’s curator of film and video, agrees that the life of a doc­umentary filmmaker in this city isn’t always easy. “But I do think the com­munity has become more active in re­cent years. There’s a new generation of filmmakers here doing some incredible work and they’re very supportive of each other,” she adds. “It’s not that dif­ferent then when Rick Linklater started the Austin Film Society to support like minded filmmakers there.”

Lunzt points out that the MFAH screens local documentaries and there are sev­eral venues of support from the Houston Film Commission to the Documentary Alliance and the Southwest Alterna­tive Media Project, lovingly known as SWAMP, which celebrates its 35th an­niversary this year of supporting citizen filmmakers and their non-commercial films.

“I think the documentary community here is very rich,” says Mary Lampe, executive director of SWAMP. “Mi­chael Moore, love him or hate him, re­ally increased awareness of the genre. And we’ve really had some wonderful Houston documentaries in the past few years.” Lampe ticks off such high profile films as “Hot Town, Cool City” by Mau­reen McNamara and “For the Sake of the Song: The Story of Anderson Fair” directed by Bruce Bryant.

“Some have gone on to the festival cir­cuit and are gaining some national at­tention,” she says. “But is it possible to make a living doing them? I don’t know; most documentaries are a labor of love.”

That’s true for Luster who works a day job in television but says he doesn’t mind pulling an eight-hour shift and then working on documentaries for ten hours. “I love living life through other people’s eyes,” he says. “I like to see their perception of this city I love.” Luster adds that he can see the day where he can make a living doing documentaries. “Not only can I see it, but I will do it,” he says.

Retired attorney Vivienne Schiffer is a first time documentarian, working with filmmaker John Carrithers on “Reloca­tion, Arkansas” a film about the Japa­nese American internment camp in the town Rowher, Arkansas where she grew up. Schiffer previously wrote a novel about the camp called “Camp Nine.”

“Writing is such a solitary pursuit,” she says. “It’s been a hoot to do film because it’s such a collaborative experience. And it’s been great for me to work with a sto­ry in a different medium.”

Schiffer says her legal background has been an asset in the business aspect of filmmaking and she’s had help from SWAMP in the technological side. “Any­body with a iPhone can go out and make a documentary now,” she says. “But to make a quality film takes money.”

“Relocation, Arkansas” should be fin­ished later this year, and Schiffer plans to hit the festival circuit and hopefully swing a distribution deal with a network. And now that the documentary bug has bitten her she’s already at work on a sec­ond film, and has about “30 more ideas.”

As for Carrithers, he has more than 14 years experience in producing, film­ing and editing documentaries, com­mercials and television programs and is currently working on a documentary directed by Francois and Susan de Menil about the Byzantine Chapel.

“I’m a for-hire filmmaker and in another part of my life I do my own documen­taries,” Carrithers, an Army brat who moved here 12 years ago says. “The commercial stuff helps pay the bills and buy equipment for my own work. I’ve been lucky to be able to support my wife and son doing work I like.”

Carrithers believes there are a lot of tal­ented filmmakers in Houston and there’s some networking going on, although there’s room for more.

Douglas Newman’s experience is a little different than most documentary film­makers here. Although he grew up in Houston he made his bones in New York City where he spent five years as a producer at ABC News Productions working on long form documentaries for the Discovery Channel, A&E and the History Channel. But now he’s back in Houston.

Newman’s documentary “The Recon­struction of Asa Carter,” an hour-long film exploring the life and legacy of the best-selling author of “The Outlaw Jo­sey Wales” and “The Education of Lit­tle Tree” airs on PBS on April 24. And he’s currently working on two histori­cal documentaries for Rice University and “Mothers at War,” true stories from mothers serving as soldiers in Iraq and Afghanistan.

“Mothers at War” has a strong web pres­ence,” Newman says. “And that’s huge, especially to create buzz and maybe generate a traditional distribution deal, for documentaries.” Newman is director of creative programming at Mouth Wa­tering Media, a Houston-based multi-platform company his brother Stephen founded, so he’s very savvy when it comes to the Internet.

Between the Internet and Houston’s air­port, Newman sees no reason not to be based here.

And that may be the key to future suc­cess for local documentarians.  “The use of social media as a way to raise funds and generate interest is changing things,” says the MFAH’s Luntz. “And I think the accessibility of equipment has made a difference.”

Who knows? Maybe the teens of to­day, shooting documentaries on their iPhones and linking them to postings on YouTube via Twitter and Facebook will someday be holding Oscar statuettes for Best Documentary.

“The technology is great,” says Luster. “We sold out three screenings of “Stick em Up!” last year using only social me­dia. But it does lessen my chances of get­ting into film festivals because there are more entries.” And, much like the book-publishing world and print journalism, so far no one’s really figured out how to make money online without a traditional dis­tribution deal.

But that isn’t deterring the new wave of Houston documentary filmmakers.