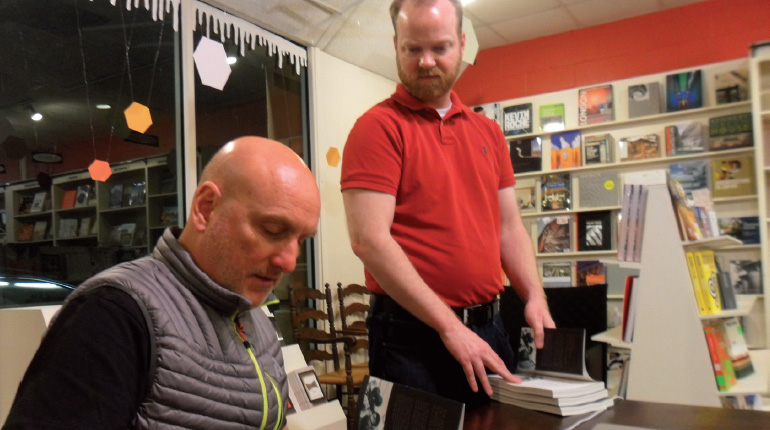 THERE IS A LITTLE DOG IN THE Brazos Bookstore logo. But is it howling or laughing?

In the rapidly changing publishing world, you might expect the mascot of an independent bookstore that emphasizes the physical paper object to howl at the inexorable drift towards ebooks and reading gadgets.

Not this mascot. In fact, this little dog is going to be trying new tricks even as it keeps up the old ones that have made Brazos a center in the literary life of Houston for nearly 40 years.

But more about the dog later.

Jeremy Ellis came to Houston last September to take on the role of store manager at Brazos. There have been visible changes, like rearranged sections and less obstruction of the windows, but these are only enhancements to the substance of what makes Brazos special.

After visiting with Ellis, I realized there were three main reasons why Brazos has been and remains a vital part of literary Houston.

Reason One: They reach into the community.

Brazos has long partnered with other organizations in the city. A large block of text on their website lists them all, but for our purposes it is enough to note that there are three universities, several museums, a broad range of lecture series, and professional and civic organizations on that list.

The main way Brazos partners with these entities is to be the bookseller at special events, especially when there is a speaker with a book to sell. Their strength in this area is their ability, as an independent bookstore, to individualize their events rather than bring a cookiecutter set-up, dictated by corporate guidelines. Particular logistics are discussed so that what’s best for everyone can be arranged.

Notably, Brazos always gets a few extra copies signed to sell in the store and through their website. So if you missed your favorite author at the last Inprint reading, check the Brazos website and click on “Signed Books.” Most likely, you can still get that prized signed edition.

Reason Two: They draw in the community.

If meeting authors and collecting signed books is your thing, attending events out in the community isn’t the only way Brazos can help you out. Every month, they have in-store author signings. March alone has 10 such events.

The authors you find at a Brazos signing might range from a nationally touring author with a book from a major publisher to a local, self-published author, but all are carefully selected to appeal to the Brazos audience.

“The Brazos audience” is, admittedly, a broadly defined demographic. They tend to be more passionate about books than your average casual reader. They look for a certain quality to the writing and are adventurous and curious enough to explore beyond the current bestseller list. Highbrow? Maybe, but not without an occasional foray into the lowbrow. (I recently browsed their humor display — they have some lowbrow cred.)

To get slightly more specific, Brazos has always specialized in some key areas. Art and architecture. Literary fiction. Poetry. Biography. Carefully curated selections in other nonfiction categories. If the last two paragraphs felt like looking in a mirror, you would probably do well to pay attention to the Brazos event calendar on their website.

There is one other program that draws especially on the University of Houston community. Every second Friday of the month, the best students from UH’s highly ranked creative writing program read their work. The Gulf Coast Reading Series (named after the literary journal published at the school) is a longstanding tradition at Brazos and an excellent chance to hear accomplished writers before they hit the big time.

Reason Three: They meet you where you are.

If community involvement and in-store events aren’t personal enough for you, well Brazos has you in mind, too. This is where we return to the little dog. During March, for a limited time, for a limited number of customers, Brazos is offering a new program they’re calling Inu-chan — a Japanese word which means “little dog.”

It’s the name the staff have come to call the mascot in the logo.

In the Inu-chan program you visit with a bookstore staff person for a brief interview. Then for the next six months, for $20 a month, you will be sent a new book, based upon that interview. It will most likely be something you never heard of, possibly from a small press, but selected expressly for you. It’s likely that no one in the Inu-chan program but you will receive that title, a little personal surprise from Inu-chan.

Between the community outreach, in-store events, and personal engagement with customers, it seems Ellis’ philosophy has multiple opportunities to continue the decades-long tradition on Bissonnet, regardless of how the publishing industry changes. What, Inu-chan worry? The little dog laughs.

— NEIL ELLIS ORTS
Neil Ellis Orts is a writer and performer and Texas native. His byline appears irregularly in local and national publications.