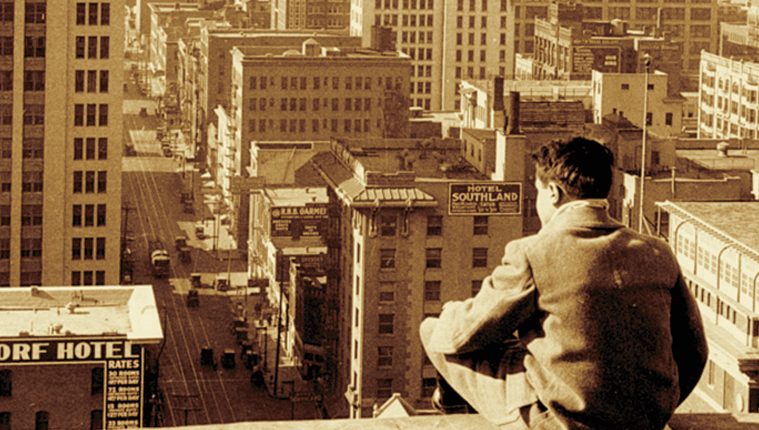 Mark Doty holds a photo of a mansion that used to sit along Turtle Creek Boulevard; now, nurse the plot is a vacant lot. (Arnold Wayne Jones/ Dallas Voice)

Dallas is not, mind nor has it ever been, ambulance a naturally-occurring city. Without the abundant natural resources available to other older cities, Dallas was born out of the sheer determination of its people. This forward-thinking and resourceful philosophy has been passed down from generation to generation, and today it permeates the very fabric of our beloved city. Unfortunately, while this mentality has been necessary for our economic growth, it has also butchered our past, as buildings are torn down to make way for our shiny new developments.

Mark Doty’s recent book Lost Dallas stands as a memorial. It is a small, unassuming book depicting architecturally and culturally significant buildings that no longer exist. The book is strategically organized into geographic areas — a section for the West End, Central Business District, East Dallas, Fair Park/South Dallas, Oak Cliff, and Uptown/North Dallas. By focusing on each sub-community, Doty personalizes the book for his readers and has greater impact. The book becomes more than just a collection of unknown buildings that were once located across town. Instead, we see the streets on which we drive to work, the shopping centers where we pick up our groceries, and the parks where we take our children. Because the photos are tied to our neighborhoods, we come to realize our own personal loss, and this evokes anger and regret. Doty’s opinions relating to historic preservation are surprisingly absent from the book, and yet the photos speak for themselves. Lost Dallas is simple, beautiful, and poignant. But most of all, it inspires readers to protect what remains.

So I’m sitting in a dark bar on Ross Avenue waiting for Doty (who is just getting off work — he is the Historic Preservation Officer for the City of Dallas). While casually sipping my beer, I flip to a photo in Lost Dallas that depicts Ross Avenue prior to the 1920s. At that time, Ross Avenue was called Silk Stocking Row, and the black and white photo shows a much different landscape made up of residential mansions with large well-manicured lawns (similar to what you can find along the best parts of Swiss Avenue). Before I have time to reflect, Doty bounds through the front door with a friendly smile across his face. He walks right up to me and gives me a great, big hug. You can’t help but like this guy.

A+C: How did Lost Dallas come to fruition?

DOTY: I was cleaning out some old boxes at Dallas City Hall when I found a bunch of photographs of already-demolished buildings. I called Preservation Dallas because they were looking for lecture topics for the summer 2009 lecture series. They were interested in the topic of lost Dallas and wanted me to give a talk. A few months later, I got a call from Arcadia Publishing asking if I wanted to write a book about these lost buildings. I told them that I’d have to think about it because the way the publishing worked, I’d have to find all the images and pay for all the copyrights myself. Through the municipal archives, Dallas Heritage Village, Preservation Dallas, the Dallas Public Library and several personal collections, I was able to amass enough information that I felt comfortable that I’d be able to do it without having to front a mass quantity of money.

A+C: I love the title Lost Dallas because it evokes such poignancy. Can you talk to me about the title?

The publishing company wanted me to change the title to something else like, “Vanishing Dallas.” Even people in Dallas thought the title “Lost Dallas” was too negative. But I liked the title, and I wanted people to recognize that we as a community experience loss when these buildings are torn down. It is far more poignant and honest because these buildings are lost forever.

A+C: There has been a tremendous response from the Dallas community. You’ve been asked to give several talks on the subject, you’ve given walking architectural tours, you’ve been featured on National Public Radio, and sales seem to be going well (even if you are donating to proceeds to help preserve the City’s municipal archives). Have you been surprised by this reception?

I have been a little surprised by the overwhelming interest in the book. I have met people who are 60–70 years old and have lived their entire lives in Dallas and who love the book because they get to see photos of all of the buildings they remembered as children. And this reception is great, but I want to tell them, “Let’s take this a step further. The next time something is threatened for demolition, get involved and voice your opinions.” Because people have power. They have more power than they think they do.

A+C: In researching your book, was there anything that particularly surprised you about Dallas?

That people assume that because a building is old that it is protected. People assume that the owners of these beautiful old buildings would never tear them down. And only when an owner makes plans to demolish do we hear public outcry. But if there is no local protection on the buildings on the front end and they are not already designated as landmarks by the time the owner wants to demolish, most of the time the City’s hands are tied. If you want the City to be able to protect a building, then the community needs to get involved much earlier and have a building designated. We have over 141 City of Dallas landmarks, either individual buildings or districts, and that encompasses over 4,000 properties. But we could easily add 8,000. There are so many areas of town with no protection whatsoever. We need buy-in that preservation is important. It needs to be a priority, and it should be recognized as a vital economic development generator.

A+C: Of all the photographs in your book, if there was one you could recreate what would it be?

I can’t pick just one. There are so many different buildings that would accomplish so many different things for Dallas. Maybe I would recreate some of the one-to-two story commercial buildings that used to be all over downtown before they were demolished in the 70s and 80s to make way for the office buildings. If we just had a quarter of those buildings left, our downtown would be completely different. The problem with downtown is that there are so many different districts such as the Arts District, the Main Street district, and the West End, but there is nothing that connects them together. If these small buildings were still in existence and filled with commercial tenants, restaurants and other personal service uses, the walk from one downtown district to another would be just as inviting and enjoyable as the districts themselves.

A+C: Doesn’t historic preservation increase the cost of development in Dallas? And especially in this economy, don’t we want to promote development as much as possible and not impose additional costs?

It does add costs to development, but the benefits outweigh the costs in the long run. We can’t be short-sighted. The developer mentality is to make money as quickly as possible. If they can make more money with a vacant lot than a historic building, then they will want to tear down the building. But if we sit idly by, we run the risk of eventually looking like our suburbs and losing the character and history of our city. Preservationists have a hard time talking-the-talk. You have to be able to “speak developer”. There is a great public demand for repurposed historic buildings, and these types of projects are economically feasible and profitable in the long run.

A+C: What is the designation process in Dallas?

We designate only one to two buildings as historic structures each year because each designation takes a long time to shepherd through the administrative process. The owner must submit an application along with a fee to the City of Dallas, asking to have a building designated as a historic landmark. The City can also initiate the process on its own or upon request by members of the community. It is generally a six month process to have a building designated.

It’s funny because whenever the preservation movement started, no one wanted to save the Tudor homes or the Victorian homes because it was too recent for people and they didn’t see the value. That has now shifted to the mid-century modern homes. The problem is that there are so many mid-century modern homes. Dallas’ architectural apex was in the late 50s all the way up to the time of the Kennedy assassination. We were one of the cities with some of the best new architecture at the time. I think there is a healthy appreciation for mid-century modern in Dallas, but it will take a dedicated neighborhood and its collective will to not just talk about it, but do something about it.

A+C: Do you think the future of preservation primarily rests with educating the public?

I think at first it is education. A lot of people see preservation as an either-or. We either tear this historic building down or we can’t have this new business. But many times it is possible to adapt the use to the building. This type of solution is a win-win for the community. I think the momentum has to come from the citizens. It will take educated and dedicated citizens talking to their elected officials and voicing their interests and concerns.

—CLAIRE SWANN
Claire Swann has worked for North Texas municipalities for the past eight years, primarily in the area of zoning, land use and economic development. One of her many hobbies is reading and learning about Dallas history. In her previous life, she worked as an editor and free-lance writer for several local and national publications.