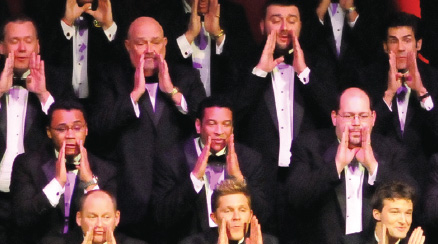 The Sweet Sounds of March

CHORAL LOVERS ARE SINGING about two wonderful events this month, healing unfortunately they are both on the same night, search so choices must be made.

On March 24, the Houston Chamber Choir premieres Dominick DiOrio’s full-length composition “A Dome of Many-Coloured Glass.” The work is influenced by the poems in the collection of the same name by lesbian poet Amy Lowell published in 1912. Even though she won a Pulitzer Prize posthumously, Lowell’s works were largely forgotten after her death in 1925, but she made a comeback when gender studies took hold in the 1970s.

“Lowell’s poetry comes from the Imagist school, characterized by an economy of language and a vibrancy of color,” DiOrio says of “Dome.”

“Where some poets may take ten words to describe one image, Lowell can use six words for six images. The text is so inherently musical and practically sets itself to music.”

DiOrio has been a tenor at HCC since 2009 and has a master of music in choral conducting from Yale University. He is set to finish his doctorate of musical arts from Yale this year and “Dome” will be presented by the Houston Chamber Choir there on April 15.

Scored for marimba, choir and soprano soloist, DiOrio says the idea for “Dome” came from his past. He played marimba in high school, which lead to percussive compositions that led to attending Ithaca College as a composition major and his love of choral music and conducting.

“Beyond that,” he adds, “the marimba is just so warm and lyrical, it’s one of the few percussion instruments that can really sing. I wanted to bring out this natural lyricism and pair it with the sound of a solo voice.

“This is my first work composed for the Houston Chamber Choir and artistic director Robert Simpson,” he says. “It’s a major choral work, in four movements, just under twenty minutes, and I am so thrilled that Bob and these fabulous singers have been willing to follow me down the rabbit hole on this musical journey.”

BCPA began life as the Montrose Singers in 1979 and is in its 33rd season of performing. The organization now includes the Gay Men’s Chorus of Houston, Bayou City Women’s Chorus, Bayou City Chorale, the Pride Band and Bayou Rhythms.

Artistic Director Dr. Linus Lerner describes the new work, the second of four performances for the organization this year, as a beautiful, emotional and commemorative performance.

“I knew the ‘don’t ask, don’t tell’ policy would be overturned when I planned this for the season,” Dr. Lerner says. (The policy was repealed September 20, 2011.) “But I didn’t know it would happen before this show so I’ve had to revamp it, so now it’s more of a celebration of that. When I started to compile the performance it was because I had talked to all of these veterans and they would say ‘why can I kill for my country but I can’t be myself?’ I just couldn’t see what the problem was about having gays and lesbians serve in the military.”

BCPA’s premiere of “Don’t Ask Don’t Tell: Coming Out Under Fire” will include musical selections from various composers including poignant protest songs like “Hope for Tomorrow” as well as stirring songs about change such as “Do You Hear the People Sing?” from “Les Misérables” and even a little light heartedness with the Village People’s “In the Navy.” And as a tribute to the repeal of the policy, retired Staff Sergeant Eric Alva, a San Antonio native who was the first seriously injured Marine in the Iraq War, a Purple Heart recipient and a leading advocate of ending the ‘don’t ask, don’t tell’ policy in the military, will be the host of the evening.