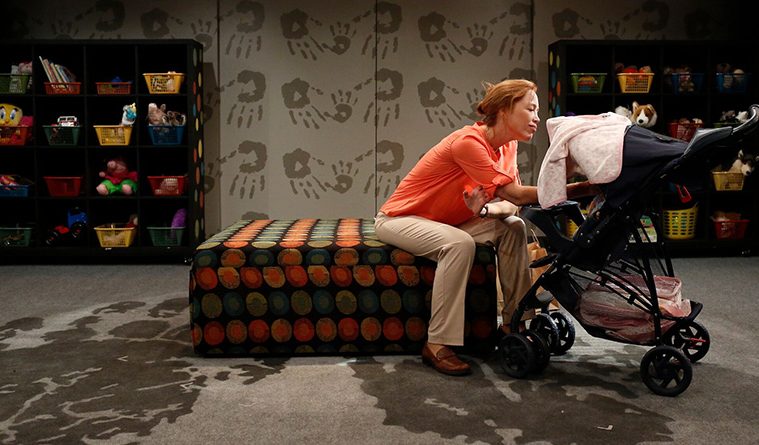 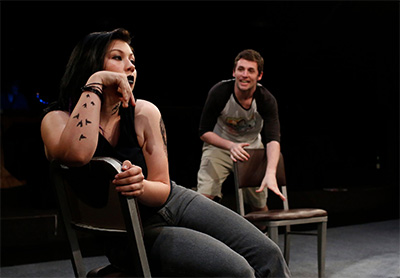 With a quick glance at the synopsis, playwright Rebecca Gilman’s Luna Gale, now at Stages Repertory Theatre through May 28, would seem to possess all the serious markings of an issues play. Its story about a social worker’s attempts to find the best placement for the infant daughter of teen meth addicts almost cries out “attention must be paid” to this important topic.

Fortunately from the first scene, Luna Gale rather unexpectedly begins to take on the guise of another genre of theater, the mystery play. With characters who lie and hold horrific secrets until a cynical and world-weary investigator can deduce and draw out their perceived truths, Luna Gale possesses all the suspense and surprises of good detective fiction. Yet the production delivers so much more than well-crafted reveals because the great mysteries within the play are not ones of who done it, but of the tragic puzzles that are human lives. During the storm over baby Luna, only solving the secrets of the past can bring even slight hope for the future.

The play begins in a hospital waiting room as Luna’s distraught but still tweeking young parents Karlie (Tanith Albright) and Peter (Jeremy Gee) await news about their ill daughter. Soon they meet the woman who will have the power to destroy or save them, Caroline Cox (Carolyn Johnson). They at first mistake her for a nurse until, sharp and adversarial, she begins interrogating them, and by the end of this quick introduction to the couple, the child advocate is ready to intervene and the audience most likely ready to render judgment on such unfit parents. 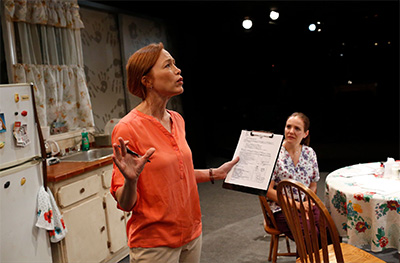 But as each scenes introduces more and more people tied to either Luna or Caroline, those first impressions prove too simplistic. Soon the social worker must spin her own lies (or are they?) to get to the truth of not who will love the child most and best but the real conundrum of whose love will nurture instead of harm Luna.

We follow Caroline on her inspection rounds first meeting Karlie’s mom, Cindy (Elaine Robinson), who seems at first the perfect interim caregiver for the baby, until, supported by her pastor (Justin Doran), Cindy decides she wants to adopt her granddaughter and prevent Karlie and Peter from seeing their daughter again. Meanwhile, Caroline’s supervisor Cliff (Kevin Crouch) has his own murky reasons for wanting to interfere in the case. While Caroline tries to untie the tangle of secret histories, prejudices and motivations–including her own–she holds fast to her vaguely parental relationship to Lourdes (Melissa Molano), one of the kids she ushered through the foster system who has managed to survive and thrive.

To get any deeper into the story would spoil the unraveling of the past pain and traumas that have brought the family, and supposed supporters, to a place of war over Luna’s best interests.

Director Seth Gordon, a familiar behind-the-scenes face at Stages, and the cast, familiar onstage faces as well, take Gilman’s tight, character-driven script and give these lives great complex and sad beauty because of, not in spite of, all their frustrating flaws. As soon as we decide who is the villain in this piece, Gordon and Gilman pull the baby blanket from under us and we’re left having to completely reevaluate a character and perhaps our own prejudices. Even the set from scenic designer Jon Young has a kind of puzzle piece feel as the back wall opens, closes and unfolds to reveal a new setting where a new piece in the jigsaw of Luna’s future, everyone else’s past, will be put into place. 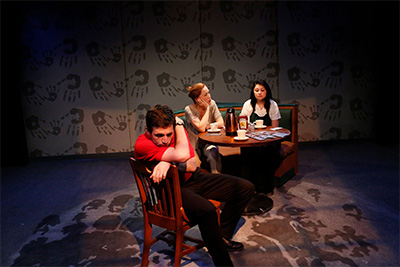 This is the kind of production where I fear even singling out any one of the stellar performances would also spoil some of the complexities of those performances. I will note that while Houston has its share of great actors, in recent years Johnson has become one of the city’s most chameleon-like. Yet, she manages to go much deeper than skin deep in her character shifts. (Yes, this is the same woman who became Judy Garland in End of the Rainbow a little over a year ago in the same theater.) Johnson does the heavy lifting here, as she’s in almost every scene, but that load is made quite a bit lighter by her cast mates. Teen drug addicts, crazy Christians, calculating bureaucrats, they all could easily devolve into stereotypes, but neither the playwright, director nor cast will allow anything less than the nuance of real human beings, with all of their weaknesses and occasional quiet strengths, on the stage.

Great sadness lies at the beginning, middle and end of Luna Gale, but when most of the mysteries are solved and truths revealed, they might not have set everyone free, but they at least delivered some rays of hope, like moonlight at the end of a storm.