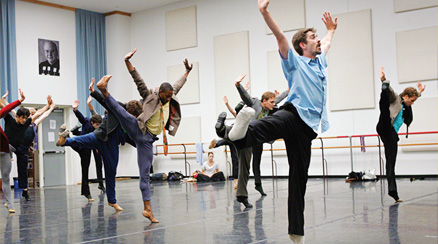 Stanton Welch has transformed Houston Ballet into a leading force in the dance world.

Artistic director Stanton Welch looks at home in Houston Ballet’s airy new Center for Dance. The windows of his office frame views of Houston’s tangled highways, cheap the winding inner city river known as the bayou and the majestic Wortham Theater Center, order where the company performs. This splashy new downtown building is just one of Welch’s many accomplishments since becoming artistic director.

Welch heads into his ninth season this fall with a healthy organization. He has a new flock of talented dancers, buy cialis including principals from other companies who took demotions to join Houston Ballet’s ranks— notably Melissa Hough of Boston Ballet, Danielle Rowe of The Australian Ballet and Karina González of Tulsa Ballet.

The company has become more prominent in recent years, boasting a repertoire of postmodern pieces and regular full-length premieres.

According to Welch, he’s an unlikely candidate to end up running the nation’s fourth-largest ballet company. After 11 years dancing at The Australian Ballet, in 2000 he became a freelance choreographer based in New York. He fully intended to return to the stage when the commissions dried up, but they never did.

During the next three years, Welch set work on BalletMet, Houston Ballet, San Francisco Ballet, The Australian Ballet and other companies.

“I had no artistic director ambitions,” he says. “There’s so much fundraising involved. I just didn’t want it.”

Earlier, Welch had been considered in the search process at BalletMet, eventually turning the position down to remain resident choreographer. But when the post opened up in Houston, the opportunity was too tempting.

“When I came here to create Indigo in 1999,” Welch explains, “I found out that Houston Ballet was an eden for choreographers.”

The company has its roots in the Houston Ballet Foundation, which brought Carla Fracci and Erik Bruhn to Texas to stir up local interest in the artform in 1967. By 1969, a professional company was in place under Nina Popova, a former dancer with the Ballet Russe de Monte Carlo and American Ballet Theatre. But it was Ben Stevenson’s term as director, from 1976 to 2003, that raised the company from a 26-member regional troupe to a 50-strong ensemble of international acclaim.  Stevenson developed a strong repertoire filled with his own classical full-lengths plus new work by respected choreographers. Such stars as Nina Ananiashvili, Carlos Acosta, and Lauren Anderson flourished during his tenure.

Welch has continued the momentum, True Texas Spirit Stanton Welch has transformed Houston Ballet into a leading force in the dance world.

Stanton Welch sets Play on Houston Ballet dancers Bruce Bennett 69 adding ballets by such contemporary masters as Hans van Manen, Jirí Kylián and Mark Morris, as well as increasing the Balanchine and Jerome Robbins repertoire. He has also mounted his own versions of Swan Lake and La Bayadère, in addition to his Marie, based on the life of Marie Antoinette. A bounty of new works fills the bill each year.

Although the company has not grown in size since the Stevenson era, it has grown in stature in terms of repertoire, touring engagements, audience size and endowment. Competitive salaries attract top dancers. The six-story Center for Dance has increased the local and national profiles of the company.

“We are more visible now, and for once, we have extra studio space for dancers to experiment with choreography,” says Welch. Inspired by his own rise as a choreographer while in The Australian Ballet, Welch has reinstated the Choreography Workshop, where company members get a judgment-free chance at making dance. Melissa Hough’s piece from the workshop was even selected for the company’s annual Jubilee of Dance performance last December. Welch wants to develop his dancers as creative partners, and fantasizes about Houston Ballet becoming the next Stuttgart Ballet, which launched the careers of Kylián, John Neumeier and William Forysthe. He says, “It’s my ultimate dream to nurture the next generation of choreographers.”

A true Texan at heart, Welch has big plans for the future. He would like to bring the company roster up to 60 and be able to perform a new full-length each year.

“I’d love to mount a new-works festival similar to what San Francisco Ballet did a few years ago,” he says. He’s proud of his plan to highlight three female choreographers—Julia Adam, Aszure Barton and Twyla Tharp—next season. He will also create his own version of The Rite of Spring in 2013 to celebrate the landmark ballet’s centennial.

Welch sees Houston Ballet inevitably tied to the city it serves: “Houston is a brave city. It has a frontier spirit. It has adventurous audiences who are not frightened of bold ballets.”