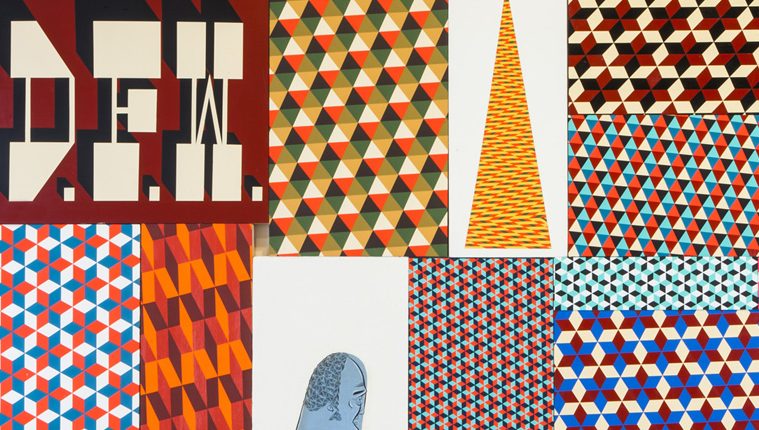 The colors, grit, and spirit of San Francisco provide the foundation for its native Barry McGee’s extraordinary artistic arsenal. With the freedom of the moniker Twist, McGee celebrated the disestablishmentarian mentality of the Mission District.

“Tagging is a way of letting a lot of people know you exist, similar to how corporations do massive ad campaigns to let you know their useless products exist,” asserts McGee. Through this commentary on the negative attributes of capitalism, gentrification, and corporate control of public spaces, McGee began to experiment stylistically. The downtrodden caricatures of the marginalized man and graffiti tagging quickly became vital players in McGee’s visual signature. Thus began the emergence of themes and motifs that have become synonymous with his name. After graduating from the San Francisco Art Institute in 1991, McGee began to cross the divide of the graffiti scene and the contemporary art world.

Masterfully merging his formal training in painting and printmaking with the artistic influences of 1970’s and 1980’s graffiti art, Mexican Muralists, surfer culture, the beat poets, geometric abstraction, typography, tramp and op art, and cartoons, McGee has formed his own distinctive visual lexicon.

“His work is a potent mix of explorations in color, abstraction, and the way in which various spaces can be activated,” states Modern Art Museum of Fort Worth curator Andrea Karnes. “To that mix he also brings his observations of what it means to live in a densely populated urban area. So many of his artistic concerns speak on a universal level, while they also remain specific to him.”

By tagging the streets of San Francisco, McGee made great art accessible for a large audience that might not experience art in the typical white walled art forums. But now, coming full circle with McGee’s work being shown in world-class museums, his gritty and vibrant representation of city life is accessible to the museum-goers, who typically do not interact with street art.

“The nature of his [Barry’s] work causes curators and installations to have to rethink conventions,” states Karnes. McGee is not only invigorating a generation of artists to create a new trend in art history, but he is also influencing our cultural history. By breaking down the barriers of urban art and fine art, he is also breaking down that stratus in a social context.

McGee’s work seems at home amongst the collection at the Modern Art Museum of Fort Worth. Not only does it have a dialogue with a variety of abstract works in the collection, but “there are other artists in the collection, like the newly acquired Mark Bradford painting, who investigate the social realm, politics, pop culture, and urban life, like he [McGee] does, but in their own visual language,” according to Karnes.

The exhibition, Focus: Barry McGee, at the Modern Art Museum of Fort Worth is a paired down showing of “mature work for a mature museum,” as stated by McGee. Currently a midcareer survey is traveling the United States, starting at the UC Berkeley Art Museum and concluding at the Institute of Contemporary Art, Boston. But Karnes reassures that this “more formal, powerful, and streamlined presentation for the museum” will still provide that punch of “energy, elegance, [and] complexity” that followers of McGee crave. And the exhibition does just that.

Mostly exhibiting McGee’s geometric acrylic on wood panel paintings collaged into wall installations, Focus: Barry McGee still gives museum-goers both an insight into McGee’s origins and a glimpse into his artistic trajectory. The furrowed brow, sad-sack faced man, “DFW”/”down for whatever” and “Fong” all appear in the substantial wall installations. Graphic, vibrant, and enthralling, the installations elicit McGee’s tagged San Francisco streets. By working on small panels individually and then clustering them in a grouping, McGee evokes the atmosphere of compact urban living.

The exhibition also highlights McGee’s newer motifs of numbers and red polygonal line paintings. While still referencing the city, the polygons seem to channel the sophistication of Frank Stella’s Black Paintings. McGee continually evolves as an artist, enabling him to connect with a wide array of viewers. Focus: Barry McGee will spur on a new generation of admirers while rekindling the admiration of faithful followers.

So what’s next for Barry McGee? He has already broken the barrier between the street and museums, and as he says, he moves on to new things, “because I have exhausted the possibilities…I love exploring all aspects of a certain idea or motif.” This spontaneous nature of his makes for captivated viewing and he advises us to keep our eyes peeled because “anything is possible.”

FOCUS: Barry McGee continues through June 2, 2013 at Modern Art Museum of Fort Worth.