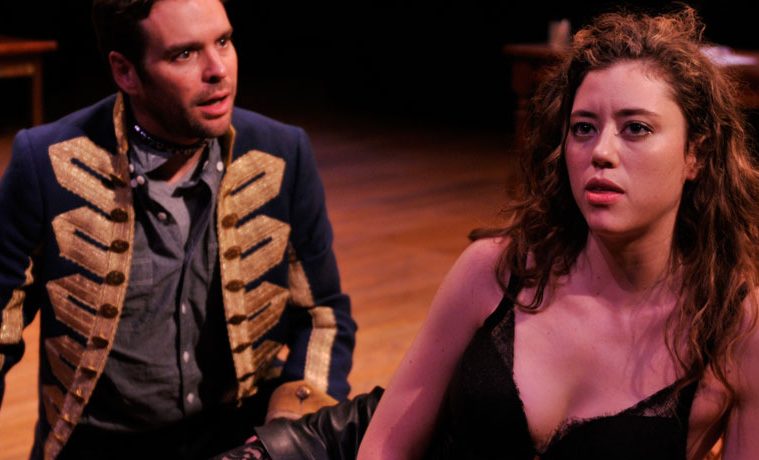 IMAGE: Michael Bakkensen as Thomas and Nicole Rodenburg as Vanda in the Alley Theatre’s production of Venus in Fur. Photo by Jann Whaley.

Taking my seat at the Alley Theatre’s production of David Ives’ Venus in Fur, online I didn’t imagine that the play might be appropriate for Halloween. Yet, doctor midway throughthe performance, I began to realize that if this spooky season is about masks and disguises with hints of something super amid the natural, then Venus in Fur is indeed a comic goodie bag of tricks and treats.

The play opens on a clichéd, yet appropriate, dark and stormy night in a theater rehearsal studio as Thomas Novachek, a playwright-director, complains on the phone about his inability to find an actress to play Wanda von Dunajew for his new stage adaption of Leopold Sacher-Masoch’s novella Venus in Furs. 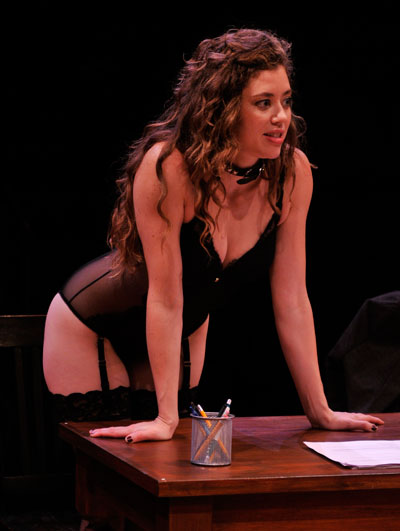 Flattering Thomas one moment, insulting him the next, she manages to cajole him into letting her audition, and he finds himself reading the part of submissive lover, Severin. Of course, she’s brilliant, even as she occasionally breaks character to play the vapid, silly actress who needs Thomas’s directing. It soon becomes apparent that the dumb Vanda is just as much role as Wanda is. Whoever Vanda really is, she’s playing a game that Thomas won’t understand until it’s too late.

On the surface, Venus appears to be about sexual and gender politics, and it has some fascinating and humorous insights to make on that level. However, by setting the play in the rehearsal hall and making the characters a playwright-director and actress who, sometimes literally, wrestle with these power dynamics, Ives adds another layer onto the themes of domination and submission.

Remaking the world of Sacher-Masoch’s Venus in Furs for the stage isn’t enough for Thomas. He must also direct the actors who enter that world. Vanda, the supposedly ignorant actress, pulls Thomas down from his godlike directorial position, and once he’s inside the created world, she begins to direct him. The director becomes actor and as his authority seeps away, the audience might begin to wonder who really has the power in these theatrical relationships.

Making her Alley debut as Vanda, Nicole Rodenburg takes possession of the stage with her entrance and never gives it up. I counted five characters she had to play, as Vanda dives in and out of the Wanda character, coming up for air each time as a slightly different version of Vanda. 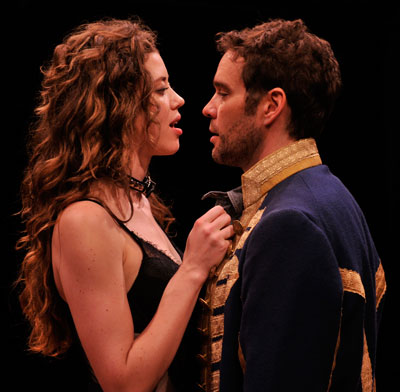 Nicole Rodenburg as Vanda and Michael Bakkensen as Thomas in the Alley Theatre’s production of Venus in Fur. Photo by Jann Whaley.

In some ways, Bakkensen has as difficult a job playing Thomas as Rodenburg has depicting the personality-shifting Vanda. Bakkensen must play Thomas as sufficiently bewildered and beguiled by Vanda that he is easily led into playing Severin.

His performances of the dominated characters, Thomas and Severin, are quite good, but his take on Thomas the playwright-director doesn’t seem quite strong enough at the beginning of the play to make his submission to Vanda feel like a real loss of power. I did wonder if this was a conscious acting choice by Bakkensen under director Weinbrenner’s guidance. If there is a flaw in the performances it’s how quickly Vanda overwhelms Thomas. Though his first speech on the phone sets him up as a an arrogant dick, Bakkensen’s portrayal of Thomas with a rather hapless center left me feeling sorry for the guy, perhaps a little too early in the play.

The play’s tricky surprise ending did lessen my doubts about the beginning performances, and I was left with a yummy piece of comic horror that I’ll still be chewing on long after Halloween.