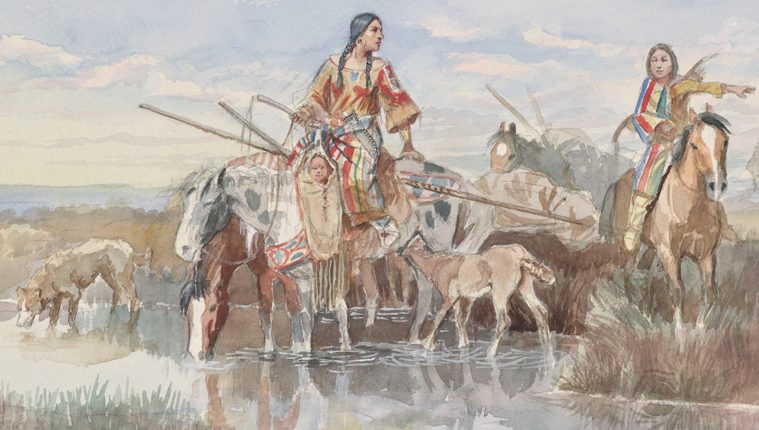 Now on exhibit, the Amon Carter Museum of American Art presents more than 100 of the finest and best-preserved watercolors by Charles M. Russell (1864–1926) in the special exhibition Romance Maker: The Watercolors of Charles M. Russell. Never before have so many of Russell’s singular depictions of the Old West been brought together. The exhibition is on view through May 13, 2012; admission is free.

“Charles Russell is recognized today as a leading artist of the Old West,” says Dr. Rick Stewart, curator of the exhibition and former Amon Carter director and curator of western paintings and sculpture. “The body of work on view in this exhibition represents the most memorable watercolors he created during his lifetime, placing him in the upper tier of American watercolorists at the turn of the 20th century.”

Russell created approximately 3,000 works of art in his lifetime—paintings, watercolors, drawings and sculpture. He turned out roughly 1,100 watercolors; thus, fully one-third of Russell’s artistic output was in the watercolor medium. His watercolors, as well as his mastery of the medium, have never been examined in depth. In Romance Maker, his works are studied in the larger context of watercolor in America from the Civil War to the late 1920s.

“The American watercolor movement—both amateur and professional—came to full fruition during Russell’s formative years as an artist during the 1880s and 1890s,” Stewart says. “The rapid rise of watercolor painting actually made it possible for a young, untutored artist like Russell to find his own way, even within the context of an isolated frontier society.”

At age 16, Russell set out from his home in St. Louis for Montana Territory, where he initially gained valuable experience as an apprentice hunter and trapper. Within a few years, he began working as a cowboy on the great open ranges of the Judith Basin and Milk River country. Whether he was working the roundups, night-herding horses and cattle, or watching his fellow punchers breaking broncos, he never stopped sketching the scenes he encountered in the vast, wide-open spaces of Big Sky Country. He visited many Indian encampments as far north as the High River in Alberta, Canada, and learned to converse with American Indians in sign language to acquire knowledge and understanding of their culture. Before long he was famous throughout the territory as “The Cowboy Artist,” and among the Indians he was known as “The Picture Man.” In 1893, after 11 years on the range, Russell gave up cowpunching to devote the rest of his life to making art.

“Initially, Russell had a great concern for historic detail and collected artifacts to be used in his work,” Stewart says. “However, as he grew older and his fame increased, his work began to show more romantic overtones with a heightened sense of nostalgia for the frontier he had known as a young man. He had experienced the West as it had once been, and he lamented its passing. The wilderness was rapidly shrinking, and animals like the grizzly bear and mountain sheep were becoming endangered. He had witnessed the destruction of traditional American Indian life by the white man, and his own way of life as a cowboy on the open range had become a thing of the past. Vivid subjects culled from his own youthful experiences were fused with the power of his artistic imagination to create unforgettable images of the mythic American frontier.”