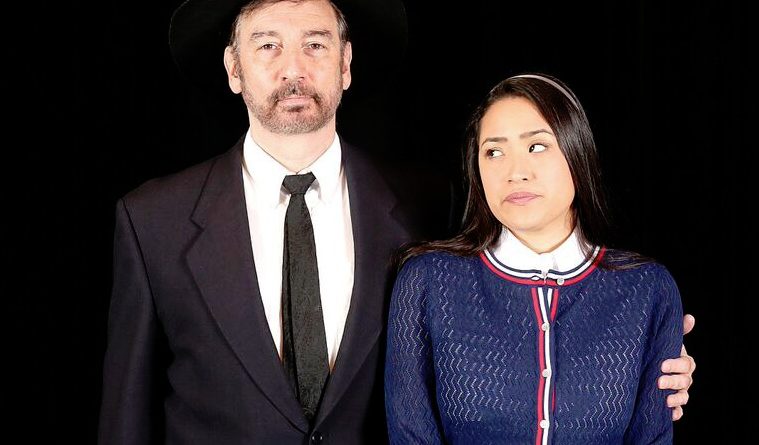 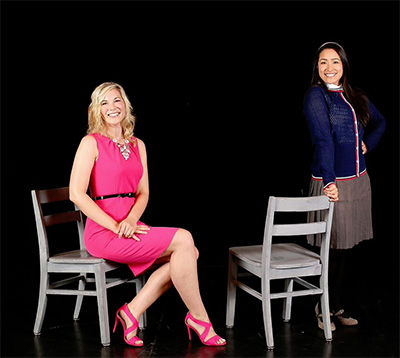 Tracie Thomason and Suzelle Palacios in HSF’s The Merchant of Venice.

Something wicked this way comes to Miller Outdoor Theatre on July 31, and Houston Shakespeare Festival creative director Jack Young will be the one stirring it up in a big bubbling caldron. Yes, everyone’s favorite king-stabbing Scot (or is he simply misunderstood?) Macbeth is back and he’s bringing Merchant of Venice’s Shylock with him.

Like a celebrity witch chef sautéing the choicest frog toes at the same time, he’s simmering all the bat wool, Young has his creative fingers in many HSF pots this year. Besides his position as creative director, he’ll also helm the director’s throne for Macbeth, all the while slipping into the role of Shylock for a Merchant version he co-adapted with its director Tiger Reel.

When I spoke with Young recently about the HSF 2015 season, the first thing I had to ask was how he’s honed those full-plate, or caldron, spinning abilities.

“I suppose it looks like a bunch from outside, but it’s what I do. I am a director and an actor,” he explained, and then went on to compare the Macbeth/Merchant scheduling with college students taking math one day, English the next, an apt simile from the head of the Professional Actor Training Program at the University of Houston.

Young does, of course, have help selecting the two plays produced each summer. No doubt there’s an appropriately spooky cave-like corner at UH where the three behind-the-scenes wyrd brothers Young, Jim Johnson, executive director of the HSF and Dr. Rob Shimko, Literary Director, come together to cross off their hit list any plays they’ve done recently. Then there are some titles out of the running from the get go.

“Billy wrote 37 plays, and there are a whole bunch of them that, while they’re the product of William Shakespeare’s genius pen, they’re not really that good.” Young admits bluntly, noting that HSF is probably not going to mount Henry VI part one anytime soon. 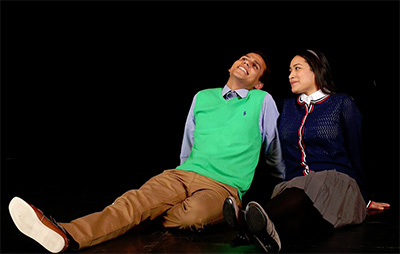 They then look for plays that haven’t been seen at Miller for many a summer, and possible casts available that year. The two plays have to compliment each other and become “sort of Siamese twins in terms of casting.” If an actor would be brilliant for a part in one play but there’s no suitable role in the other play, it becomes a problem. Young will even be taking on a few small roles in his Macbeth.

The three also have to keep an eye (of newt) on the audiences at Miller, which will likely be a combination of experienced Shakespeare devotees and novices. As usual one play, in this case Macbeth, will be staged more traditionally, while Merchant of Venice will be taken in a less conventional direction.

“We are a city of 4 million people and there are going to be those who are interested in making sure the play is done right, according to what they think right means,” Young described, adding with a laugh, “Then there are also people who are thinking: Oh god, can you please do something fun with it. I don’t want to see it THAT way again.”

For Young, this seems like a perfect time to go back to medieval, Scottish basics with Macbeth, explaining “I think for a while people might not have been as interested in it, but with Game of Thrones and all the sword and sorcery stuff and Comic-Con, people are much more interested in men with shaggy beards fighting with big swords.”

Yet even with broadswords, Macbeth still has much to say to 21st century audiences, especially when we look at the play from the angle of a soldier coming home from a long and bloody war. Musing on these very contemporary issues we can find deep within the 400-year old play, Young asks “What does it mean to be a soldier? How much do we owe you, and if we don’t pay that debt what happens?”

On alternate nights, on the same stage with most of the same actors, director Tiger Reel will be conjuring up Merchant of Venice. The play can be controversial even when staged traditionally, depending on how the characters’ anti-Semitism and the central sympathetic antagonist, Shylock, is portrayed in a production. This Reel and Young adaptation of Merchant might resonate with or rile audiences even more with its very twisty modern take. The marriage plot, where noble-born but poor Bassanio tries to win the hand and fortune of Portia by passing her dead father’s suitor test, is given a reality television Bachelorette spin. Meanwhile the Venetian merchant of the title, Antonio’s risky deal making and financial war with Shylock might possibly remind us of Wall Street’s Gordon Gekko, and perhaps some real life hedge fund managers who are “running faster than their money can keep up.”

An early version of this Reel and Young adaptation was first staged in 90 minutes as part of the Hollywood Fringe Fest in 2012, and then later at Shakespeare Walla Walla. Yet Young says each incarnation has to change with the new space and cast. “I think part of the fun for Tiger, and for me, is we’ve had this idea of the big outside of what it should be, but the way the puzzle pieces fit together to make the outside that’s going to be the interesting thing for us to discover.”

All the Shakespearean wicked fun begins July 31 and runs through Aug-9.