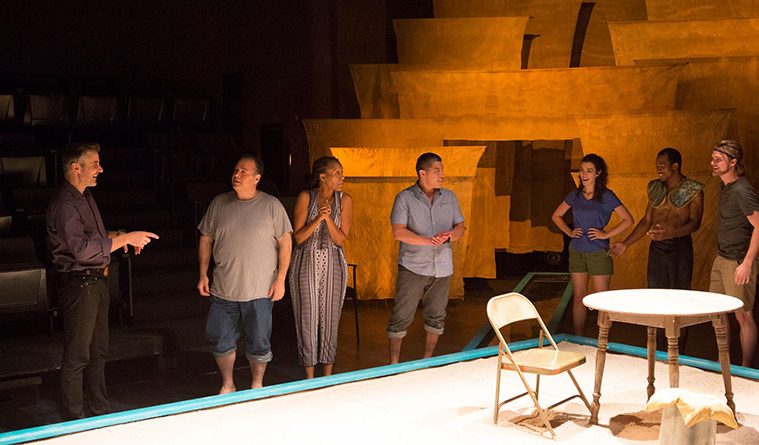 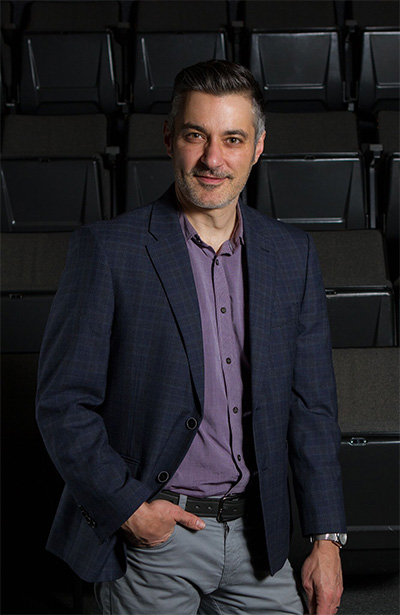 When Jeffrey Schmidt began planning his first season as artistic director of Theatre Three, he considered opening with Andorra, Max Frisch’s highly charged political play about collective bigotry. It couldn’t be more timely. Then he decided to slow down. Schmidt was inheriting an older audience accustomed to Beth Henley and Rodgers and Hammerstein, and he worried about losing their loyalty from the start.

“I didn’t want to send a message that I’m ignoring you or trying to alienate you, not at all,” he says, in an interview backstage at the theater he took over in January from co-founder Jac Alder, who died two years at age 80. Only 44, Schmidt was picked by the theater’s board of directors after a national search. With his wide experience and deep ties to the local theater community, Schmidt was the natural choice to push Theatre Three into a new era.

From 2000 to 2014, the University of North Texas graduate was the company’s artist-in-residence while he continued to act, design and direct at some of the most avant-garde theaters in town, including Kitchen Dog Theater and Undermain Theatre. He also directed On the Eve, perhaps the most original musical conceived in Texas in the past 20 years, and still runs a small, acclaimed company, The Drama Club, with his wife, Lydia Mackay. “We can still be relevant,” he says of Theatre Three, “ and I will start sneaking in some more challenging things.”

Founded in 1961 by Alder and his future wife, the late Norma Young, Theatre Three is one of the longest running professional companies in Dallas and the state. Alder and Young, before she passed away in 1998, built on the regional theater movement that Margo Jones launched in the 1940s in Fair Park. For decades, it was one of the few outlets in Texas providing opportunities for local actors to appear in New York-level productions.

Schmidt’s first priority is to create more consistently high-quality shows, whether the fare is traditional or cutting edge. He also recognizes that theater is moving in new directions, including an emphasis on developing new work by local playwrights and offering audiences the chance to participate in immersive experiences.

“A lot of patrons want to see things they’re familiar with, so it’s a bit of a risk. But I want that to be a part of the season,” he says. “I want the theater to be part of the artistic conversation happening in Dallas and on a larger scale, because that exchange ultimately benefits audiences. The exposure they get to new plays, new ideas, new artists is going to attract a higher caliber artist to our town. Are we solely reheating — the TV-dinner style of doing plays — or do we make art? I want the theater to make art.”

After opening the main stage season in August with The Minotaur, a contemporary retelling of the Greek myth, Schmidt is mounting the 2007 musical Adding Machine, which he calls “extremely difficult,” later this month. It’s based on a 1923 play, produced at Theatre Three in the 1970s, about a man who kills his boss after he’s replaced by the title contraption. With its dark plot and the discordant sound of machinery at work, “it doesn’t always make you feel comfortable,” Schmidt says.

Meanwhile he’s reserving the 80-seat downstairs space, Theater Too, almost exclusively for the development of new work by local playwrights, including Matt Lyle’s Cedar Springs or Big Scary Animals, about an older couple who accidentally move into Dallas’ gay neighborhood (Sept. 7-Oct. 1), and Jessica Cavanagh’s Self Injurious Behavior (May 17-June 10), about a mother’s struggle to raise her autistic son. Schmidt also is turning over the intimate venue to PrismCo, a Dallas movement-theater troupe whose wordless shows aren’t like anything else being produced in Dallas. Founded by Southern Methodist University graduates Jeffrey Colangelo and Katy Tye, PrismCo will offer their take on King Lear from Oct. 26 to Nov. 19.

Back upstairs in the main space, Theatre Three will present the professional world premiere of  The Last One Nighter on the Death Trail Starring the Disappointment Players (April 26-May 20), a musical about the 1930s vaudeville scene in Dallas’ Deep Ellum neighborhood. It was written by local actors Christie Vela and David Goodwin and the Our Endeavors Theater Collective.

Schmidt also hopes to turn Qui Nguyen’s She Kills Monsters (March 8-April 1) into an immersive experience that will draw a younger audience. It tells the story of a woman who stumbles onto the world of fantasy role-playing after her sister’s death. “My favorite part of the process is when you do that first reading with an audience,” he says. “It’s something brand new, and you can see all the possibilities.”