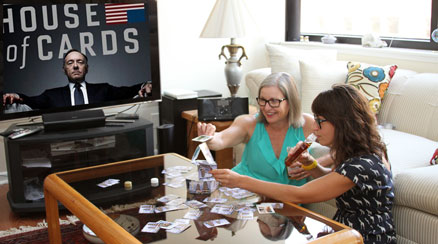 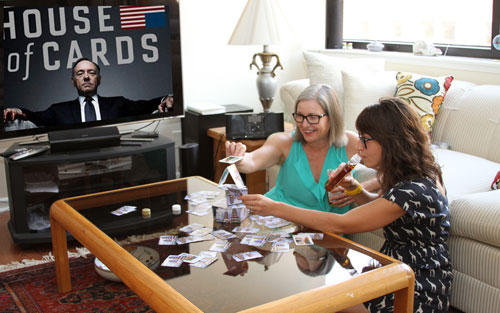 A + N are back at A + C to bring you the latest on our ever important pop culture views. We did actually go slumming and watched The Great Gatsby together, however, Abby didn’t entirely appreciate that I worked through the movie. What? Like you don’t. In the end, we just wanted to talk about Daisy’s darling frocks.

So it was back to the black box for us, and staying true to slow journalism we are just now getting around to talking about House of Cards (HOC), or as I like to say, “Not The West Wing”, or if you prefer, “Richard III goes to Washington.”

I had great plans of taking Abby on a whirlwind House of Cards tour of DC, including a stop at a famous rib joint, a jog in the cemetery, scoring a visit with the most Francis Underwood like member of Congress, the works. But don’t ya know it, that didn’t happen. So it’s just us again, sluggin’ scotch, talkin’ evil.

A+C: I read your story about binge watching in The Houston Press, and thought, oh wow, I did that once with The Wire. It took me 3 years. Not so binge-y. Then I thought, why be such a stick in the mud, I’m going to try to sit still for 38 minutes. During the first episode, I wondered, where’s Donna and Josh walking and taking? Damn, it seemed deadly dull. By episode three, I was fiddling with my Google calendar. By mid-week, press events went unattended, deadlines missed, dinners uncooked. Is this a virgin binge thing or is this show that good?

Abby Koenig: Hitting on a show that you absolutely love and are drawn to enough to turn down opening night (media!) seats is a huge achievement for any TV program. As an old-timey TV binger, I will say that I watched the first episode of HOC and the minute it ended, I turned to my husband and said, “What have you got going on right now?” which is our secret code for, “hey, let’s keep watching TV all night.” I think a lot of the immediate attraction to HOC is the fact that it’s not easily digestible. You are not 100 percent on who is “zooming who,” and that fact makes you want to figure it all out quickly. The first episode ended and I genuinely didn’t like any of the characters but loved them all — that’s good TV.

A + C: What a big bowl of evil. I have an ongoing conversation with my husband on who is the evilest of the bunch. I adore the way Francis turns to us in a wink, to tell us what’s really going on. It’s diabolical, and a fresh take on fake doc style. Are you hearing Big Daddy from Cat on a Hot Tin Roof in Kevin Spacey’s voice?

AK: Oh definitely! He doesn’t have the sweet Southern thing going on; it’s the evil pig-slaughtering farmer accent he’s captured. But who is the most evil is so difficult to tell. Robin Wright’s character is so perplexing. She up and fires her entire staff with absolutely no remorse, but she definitely has some feelings as we have seen with her photographer friend. And then the relationship between her and Spacey, at first it seems like it has so much love and adoration, but then maybe they hate each other? Complex indeed.

A + C:  Love and adoration? Really? I fear for Francis if he doesn’t hit that rowing machine. Wright’s Claire is a marvel. Beauty and creepiness all rolled into one tall, middle-aged, gorgeous lady with some master plan to clean water, get her husband fit and screw a New York photographer. Taking over the world is in there somewhere. They have taken the idea of the power couple off a cliff.  At least she seems to have a pea-sized conscious of some kind, because the graveyard seems to be beckoning her. The sex for a scoop Zoe Barnes is the one born without a heart. As a journalist, what do you think of the portrayal of the field?

AK: Zoe is a great character, and I like that she is a woman selling her soul for a job. So often we see men doing this on television. As a journalist, I can’t imagine doing something like that, but I don’t write for a highly stressful, political-minded newspaper in a town where people will slit your throat to get ahead and then pretend to cry at your funeral; I, fortunately, write for you! But, the actress, herself, is not sexy enough for me to pull all of this off. She’s too mousy for me to believe she’s using her body to get a story.

A + C: Ouch on Ms. Barnes. Yes, she does look like someone’s little sister, and that apartment would scare her mother. I don’t think we pay as well as Slugline. Isn’t that a hoot? And where are our TV appearances? But you have to admit she does channel Glen Close in Fatal Attraction as she perused Claire’s closet. There are so many flavors of bad behavior in HOC; it’s an evil-a-thon. Is that the series’ strength or weakness?

AK: It’s the series’ strength. The show turns on you. There has been this trend in television lately of not knowing who to root for because the main character is the bad guy, but he/she is also the good guy. Zoe fits right in to that concept. She is a user, but she’s also being used and then maybe she’s crazy but we kind of understand why she is doing all of this. It is what makes the show so compelling.

A + C: So how does it all fall down? Here’s what I see happening. Zoe gains weight and can’t fit into her seductress uniform white dress, gets fired at Slugline, writes a memoir called “Above the Fold.” Emma Stone plays her in the movie. Claire’s law suit heats up, Gillian dies under mysterious circumstances. New York photographer loft guy doesn’t return Claire’s calls, he too, dies under mysterious circumstances. Francis becomes Vice Prez…..take it Abby.

AK: I honestly don’t know what’s going to happen, but whatever it is it’s not good for this country. Do you think Washington is really like House of Cards? That question was my biggest take away from the show, and then the NSA wire tapping thing came out and I just started looking into flights to Canada.

A + C: We have lived through many a house of cards collapse. Enron anyone? But really, we are talking pop culture not politics, although it’s easy to get them confused. What should I binge on next? Something vintage-y?

AK: Wait, you can’t believe everything you see on TV? Oh, no. Hmm… What’s next? Orange is the New Black has Abby & Nancy written all over it.

Abby Koenig writes for most publications in Houston on pop culture, the arts and other weird things. Nancy Wozny remains a pop culture illiterate while editing A + C TX.