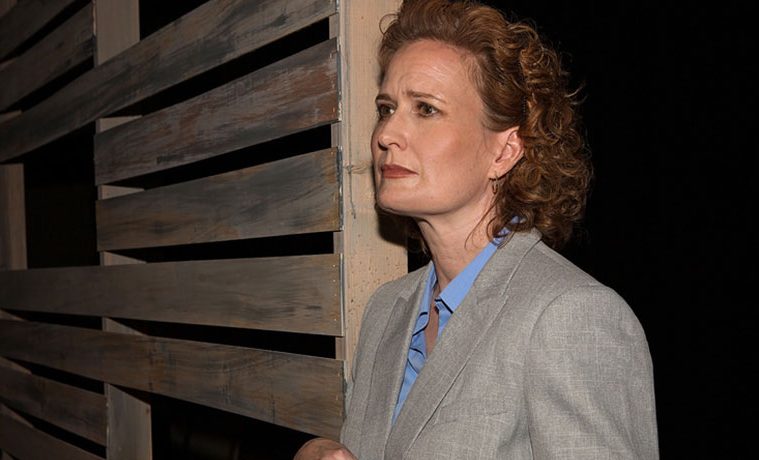 IMAGE ABOVE: Julienne Greer (Juliana) in The Other Place by Sharr White. Photo by Leah Layman. 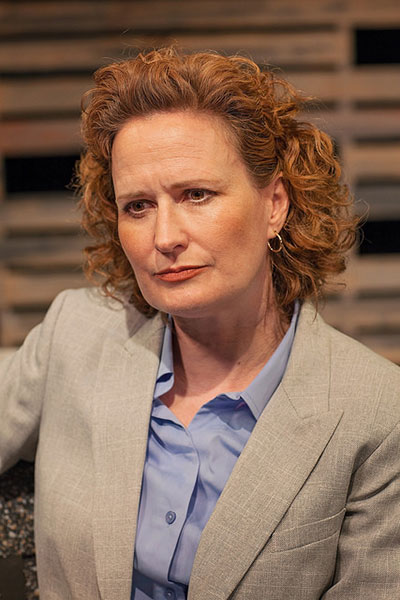 Julienne Greer (Juliana) in The Other Place by Sharr White. Photo by Leah Layman.

Julienne Greer takes on the role of Juliana Smithton in Circle Theatre’s production of Sharr White’s The Other Place, May 1-24. White chronicles the story of Smithton, a successful neurologist, who suffers from a devastating neurological event, while facing divorce, an estranged daughter and a life in free fall.

Greer is a scholar/ artist who directs, performs, produces, and writes in the theater, film, and game studies disciplines. She earned a BFA in Drama from New York University’s Tisch School of the Arts and a MA in Media Arts from Texas Christian University’s Bob Schieffer’s College of Communication (formerly College of Communication). In addition to Circle Theatre, she has also performed at Dallas Theatre Centre and Stagewest. She visited with A + C editor in chief Nancy Wozny on the role, her academic life and her hopes for young Texas theater artists.

Arts + Culture: You open in the role of Juliana Smithton in Circle Theatre’s production of The Other Place. Certainly this has to be juicy role, but difficult as well. Divorce, illness, a career in trouble, these are things that can and do happen. Can you talk about your approach to playing Smithton?

Julienne Greer: My approach to the role is fairly eclectic. I use my early training, which is a blend of both physical and more external representations of a character, alongside internal or more emotionally behavioral choices. In terms of physical, I’d look at her position in her field, her class, the way she may hold her body in one situation, but different in another. In terms of the behavior choices for the complex situations she goes through – divorce, illness – I try to look at more generalized versions of similar circumstances and see what elements both situations may share. Meaning, I haven’t been divorced, but I have certainly experienced betrayal, loss, rejection, all common aspects of a divorce and I can mold them to fit the character and the play. And of course, my approach to playing the character is always guided by the actors and the director I am working with. You learn each other’s styles, how they approach the play or a character and you grow with them. 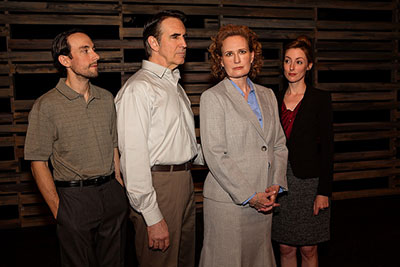 A + C: My background is dance and somatics, so the first thing I attend to is how an actor embodies any character. From what you said, it seems the physical choices are very important to you too. Can you talk about the physical aspects of your training?

JG: Yes, I danced when I was young girl. And when I first went to NYU, which places their students in different “studios” based on performance technique, I was placed in a Musical Theatre studio; however, I performed all my mainstage shows in the Experimental Theatre Wing (ETW). This led me to look at acting performance in a much more abstract way. Rehearsals would consist of group exercises of improv, floor work, behavioral work that mirrored some of the iconic 60s and 70s director/writers – Jerzy Growtowski, Antonin Artaud. I have to say it was a little unsettling at first, but oddly enough, I have found as I’ve gotten older that I return to the authenticity of physical movement. The character, the emotion, always come from some physical impetus. Our bodies are so much smarter and more in tune with how to respond to life than our brains are! Most of the time, I find my more critically assessing self will do a better job at keeping me from finding a truth in a moment, but my body doesn’t lie! 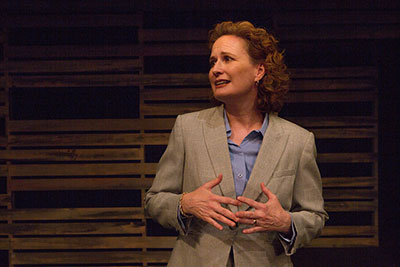 Julienne Greer (Juliana) in The Other Place by Sharr White. Photo by Leah Layman.

A + C: That’s what Martha Graham always said and I stand by it. Carry on.

JG:  I wish I would have done more modern dance work! I was usually the ballet dancer. In terms of abstract/physical work, I had some very good training. I was able to work with Anne Bogart (Viewpoints) at NYU and many other very fine directors. Over the years it has all evolved into what I do as an actor. What is especially interesting about this production is that is minimally designed, so each physicalization of Juliana carries meaning, there are very few distractions.

A + C: You have had such a substantial career. What’s changed in your process over time?

JG: One of the aspects of performance that I’ve noticed in myself is that I definitely feel I have become a better actor as I have aged – one of the few things that gets better – but that it also feels more intense. Meaning, the ease I had when I was younger regarding memorization of  lines, long runs, balancing life and art, becomes more difficult for me, but I have also learned to prepare better and sooner. I started on the lines for The Other Place about three weeks ago. That is a new record for me! 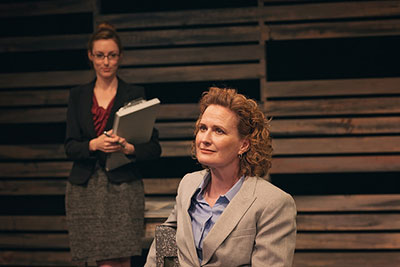 Meg Shideler (The Woman) and Julienne Greer (Juliana) in The Other Place by Sharr White. Photo by Leah Layman.

A + C: How does teaching at UTA shape your work as an actor?

JG: I am definitely a product of my academic life. I label myself as a scholar/artist. One of the great satisfactions I had finishing my doctorate was the struggle to finally overcome how to talk about what happens in the artist when they perform.  Actors can be such eloquent tools when they act, but it can sometimes be extremely difficult to write down or explain your process to someone else coherently. I was challenged at UTD to continually question my process and write it in a language that not just another actor would understand. When I was successful at this it gave me a sense of ownership to my work that I had not experienced when I was only a performer. It is also extremely fulfilling to me to work daily with the young performers at University of Texas at Arlington (UTA).

A + C: It sounds to me like you see teaching as part of your practice as an artist. As a theater educator, what are your big concerns for young artists today? What skills do you hope they have at the ready when they enter the professional world?

JG:  I absolutely do see my teaching as a part of my life as an artist. After college, I continued to take acting courses. Those classes were more than just a place to practice technique. They were a community of people who saw themselves as artists and felt they had something to give back. I try to communicate that to my students at UTA. It may seem odd, but I don’t have concern for young artists today.  In fact, I have an incredible amount of optimism. 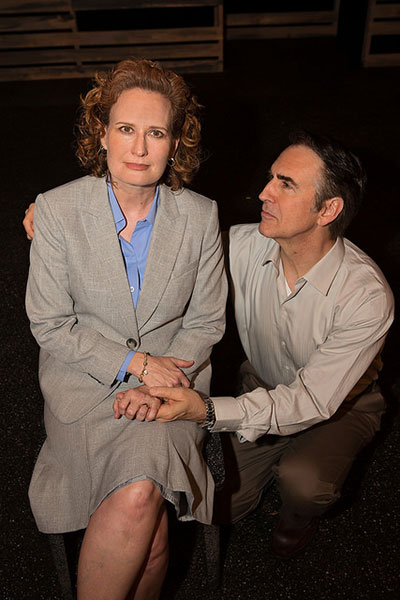 Julienne Greer (Juliana) and Bill Jenkins (Ian) in The Other Place by Sharr White. Photo by Leah Layman.

JG: I think they will find themselves even more valued as we merge more of our daily life with technology. In my opinion, the world is hungering for more artists and creativity. Actors have such flexibility, such resilience, such concern for human relationships that they bring out the best in others. Now, I do temper all my academic work with young artists with a great deal of industry “reality.” I know it will be a tough life for them and I don’t sugarcoat it.  I expect them to be on time, come to class, be prepared, and then perform artistically in a way that strengthens and broadens their understanding of the character/play. I am constantly encouraging them to advance  their career tools: their headshot, resumes, webpages and reels. How they need to make their own work. How they need to network. I think the artists of 2014 have to be talented, professional, smart, passionate and persistent, but not always in that order.