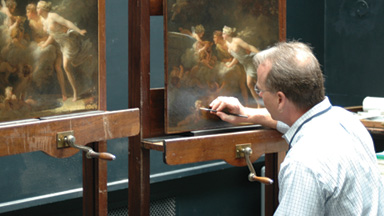 Mark Leonard at work restoring some museum works at the Dallas Museum of Art.

The Andrew W. Mellon Foundation has awarded the Dallas Museum of Art a $500, viagra order 000 grant in support of the newly created position of Chief Conservator, ensuring the launch of a strong conservation program at the Museum. The position will be held by Mark Leonard, who, upon his July arrival will immediately begin work on building the Museum’s first paintings conservation studio. The studio, when completed, will serve as a center for integrating the culture of conservation across the Museum’s collection departments. Once this program has been established, the groundwork will be in place to explore the ways in which further collaboration among local museums might enhance the cultural vibrancy of the Dallas-Fort Worth area.

“We are deeply grateful to the Mellon Foundation for its support of the Dallas Museum of Art’s first Chief Conservator and for the 21st-century expansion of our conservation program,” said Maxwell L. Anderson, the Museum’s Eugene McDermott Director. “With this major grant and the generous assistance of other supporters, we can guarantee the care and stewardship of our collection, which positions us to make significant contributions to other museums in the region and in the field at large.”

“The foundation of any successful museum conservation program includes rich, collaborative working relationships between curators and conservators,” commented Leonard. “I look forward to working with my new colleagues as we weave conservation into the daily fabric of the Dallas Museum of Art.”

Earlier, Leonard worked in the Paintings Conservation Department at the Metropolitan Museum of Art for five years. He has restored paintings from the collections of the Frick Collection, the Isabella Stewart Gardner Museum, the Rijksmuseum in Amsterdam, and the Yale Center for British Art, among many others, and has published extensively on topics relating to conservation study, treatment, technology, and technique. Leonard initially studied as an artist before pursuing degrees in art history and paintings conservation at the Institute of Fine Arts at New York University.

The Dallas Opera recently announce important promotions: Gae Whitener has been appointed to serve as the company’s new Director of Development, effective immediately, after fulfilling those responsibilities in an interim capacity for the past year; while Eva James Toia has assumed the role of Associate Director of Development previously held by Whitener. With a strong background in communications and marketing, Whitener joined the Dallas Opera in 2004 as Grants Manager and Corporate Associate. In the years since, her energies moved beyond grant writing to handle special projects including OPERAtion HQ, the campaign to construct TDO’s administrative offices in the Winspear Opera House, as well as the three-year, $20 million Cultural Renaissance Endowment Fund initiative. During her term as Interim Director, she successfully managed the $8 million General Director’s Circle campaign for multi-year gifts.

Fort Worth Opera General Director Darren K. Woods announced that the company will stage two world premieres as part of its 2014 Festival season, April 19–May 11, 2014.  The company will mount the full-length adaptation of A Wrinkle in Time by composer Libby Larsen and librettist Bradley Greenwald, based on the hugely popular science fiction novel by Madeleine L’Engle, as well as the professional world premiere of the  award-winning opera With Blood, With Ink, by composer Daniel Crozier and librettist Peter M. Krask, based on the true story of 17th-century Mexican nun Sor (Sister) Juana Inés de la Cruz, a renowned intellectual, poet, nun, and champion of women’s rights who was forced by the Inquisition to sign an oath in blood renouncing her life’s work. The two operas are the company’s third and fourth mainstage world premieres.

Dallas artist John Gilford Wilcox died June 12 following a brief illness. Wilcox worked at the Fort Worth Modern Art Museum (now the Modern Art Museum of Fort Worth) during the late 1970s. There he met and worked with the well known artists Robert Rauschenberg, Frank Stella, and Dan Flavin. During the 1980s, Wilcox moved to New York and exhibited his work with Fawbush Gallery in New York City and Barry Whistler Gallery in Dallas.

Deep Ellum-based Reel FX Inc., an award-winning creative studio specializing in animation and visual effects for feature films, commercials and live-venue projects, has secured its footprint in Dallas with the acquisition of 301 N. Crowdus Street.  After seven years in the building, Reel FX acquired the 73,200 square foot property to serve as its corporate headquarters. The studio also currently occupies a 16,000 square foot facility in Santa Monica, California.