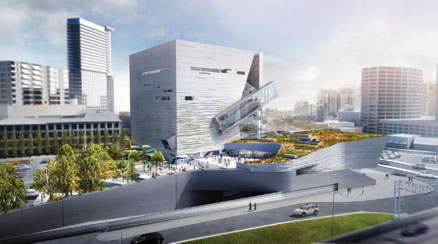 Rendering of new Perot Museum of Nature and Science.

In October 2013, viagra 100mg Dallas Museum of Art will premiere a major traveling exhibition and the first comprehensive survey to be organized in the U.S. on the work of contemporary American artist Jim Hodges. Co-organized by the DMA and the Walker Art Center, Jim Hodges: sometimes beauty explores the trajectory of the artist’s twenty-five-year career, highlighting the major themes that unify his multi-layered and varied practice. Comprising approximately seventy-five works produced from 1987 through the present, this exhibition examines how Hodges transforms both everyday and precious materials into poignant meditations on themes including time, loss, identity, and love. The show opens October 6, 2013.

The MTV Staying Alive Foundation has announced that the MTV RE:DEFINE art exhibition and auction raised more than $1,000,000 for the charity in only its second year. The event was held in  September at the Dallas-based Goss-Michael Foundation. All of the proceeds from the project will go towards the Foundation’s work in empowering young people engaged in fighting the stigma, spread, and threat of the HIV and AIDS epidemic through inspiring grantee projects around the world.

The new Perot Museum of Nature and Science opens its doors to the general public on December 1, a month before it was originally scheduled. The $185-million museum, designed by 2005 Pritzker Architecture Prize Laureate Thom Mayne and his firm Morphosis Architects, is currently under construction on a 4.7-acre site at the corner of N. Field Street and Woodall Rodgers Freeway in Victory Park, just north of downtown Dallas. The Museum will feature five floors of public space with 11 permanent exhibit halls, including a children’s museum complete with outdoor play space/courtyard, and a state-of-the-art hall designed to host world-class traveling exhibitions. Other highlights include an expansive glass-enclosed lobby and adjacent rooftop deck; a multi-media, 3-D digital cinema with seating for 297; a flexible-space auditorium; a café; and a store.

TeCo Theatrical Productions in Oak Cliff is calling for submissions for its annual New Play Competition in 2013 at the Bishop Arts Theater Center. The prize is the same as it has been for years: $1,000 and two round-trip airline tickets — which is the highest monetary prize that any local theater provides for such contests. But this year the incentive is even greater, because the event will be facilitated by Will Power, the hip-hop theater artist who was the recipient of the 2011 Meadows Prize at Southern Methodist University, and is currently artist-in-residence there. The winning playwright is decided by audience vote, although Power will work directly with finalists to help them stage their one-acts.

Dallas Art Dealers Association presented its annual Edith Baker Art Scholarship to Fernando Johnson of Brookhaven College at a reception on September 21. Johnson graduated from The University of North Texas in 2008, with his B.F.A. in painting and drawing. Most of his work up until that time consisted of process-oriented paintings where he would layer different materials, scrape away sections, and then layer again. His most current work is in clay as well as video art.  He will be applying for graduate school in the spring of 2013, and continue towards a Visual Studies Degree. Work by Johnson and the six finalists will be exhibited through November 18 at Irving Arts Center. Visit www.irvingartscenter.com for more information.

Dallas Theater Center has booted the previously announced play about Dracula from its season line-up and instead will present Neil Simon’s classic American comedy, The Odd Couple. The world premiere of The Dracula Cycle is postponed until next season to allow the production a longer creative cycle.  Playwright Roberto Aguirre-Sacasa, whose many current projects include his work as a producer and writer for the TV show Glee and writing the screenplay for a new film version of Carrie, is authoring the new tale on the Count. The Odd Couple opens in mid-March.

Stage West founder Jerry Russell will be stepping down from his position as Producing Director at the Fort Worth Theater at the end of the year. The change is part of a re-organization within the 34-year-old theater company. Russell will temporarily assume the title of Business Manager until a person is found to permanently fill that position, beginning January 1. The start of 2013 will find Russell in his new role as Founder/Producer Emeritus, which he will continue in a volunteer advisory capacity.

Dallas’ premier umbrella arts organization TACA (The Arts Community Alliance) has received a $100,000 gift from Communities Foundation of Texas in support of its 2013-2014 general operating and project grants, which will be awarded in January. This is the first time these two organizations have collaborated in this way; however, Communities Foundation of Texas has been a supporter of TACA Perforum, an annual symposium on the performing arts, for multiple years. “We historically have invested regularly in individual organizations across the performing arts community,” said Sarah Nelson, Chief Philanthropy Officer of Communities Foundation of Texas. “It occurred to us that no one has a more robust process for determining performing arts awards than TACA. Our conclusion: we should take advantage of the extraordinary trust the community places in TACA and let them distribute this money instead for greatest impact.”