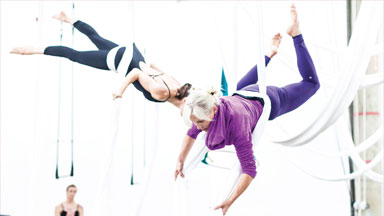 Glen Bailey is the new director for FotoFest’s Student Education Program, an in-school student visual literacy program now in its 22nd year in Houston’s schools. Bailey came to Houston from the John F. Kennedy Center for the Performing Arts, where he worked with the Center’s outreach program in D. C. Schools.

The Texas Commission on the Arts has designated the Midtown Management District an official Cultural Arts and Entertainment District for the State of Texas. Midtown is the first management district in the State of Texas to receive this honor, and joins a list of 18 other communities that benefit from the power of an art-focused community.

Vault Dance Company, under the director of Amy Ell, had a September residency at Wise Fool’s Penasco Theater in New Mexico, where they premiered Thread, slated for a Houston performance on October 19 & 20. Ell travels to Iceland this month to teach aerial dance.

Jennifer Steiner has been appointed the new General Manager at Houston Ballet. She was previously the company manager at Pacific Northwest Ballet. This month, the company will be touring Marie, October 18-20, in Ottawa at the National Arts Centre.

The Idea Fund application deadline is October 19. The Idea Fund provides cash awards to up to 10 artists, associations of artists and/or curators that create and showcase new work that involves the public via process, production, or presentation. The Idea Fund will accept proposals from artists/curators focusing on the visual arts, performance, film, video, new media, social practice, and interdisciplinary projects.

DiverseWorks launched a reinvigorated Artist Board, which will help set DiverseWorks’ programmatic direction, develop policies, and curate specific programs. Comprising the 2012-13 Artist Board is a select group of Houston artists, performers, writers, architects, dancers, and creative thinkers from a wide variety of backgrounds and disciplines, many of whom are internationally known and respected, including Trenton Doyle Hancock, Katrina Moorhead, Robert Pruitt, Leslie Scates, and Damon Smith, among others.