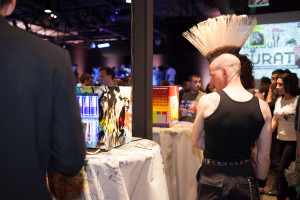 The project paired 20 hand-picked local and emerging artists with venue owners from some of the hottest local bars, lounges and restaurants around DFW. For the challenge, artists were given 3-days to transform blank canvas-wrapped Red Bull coolers into inspired works of art, customized for permanent display at each venue.

Renowned Dallas Arts experts voted on the coolers: Art and Seek Director, Anne Bothwell; Former Dallas Museum of Art Curator, Phillip E. Collins and Former Dallas Arts District Director, Veletta Lill. Though the competition was fierce, the judges ultimately named artists Jody Pham and SopaGrapes the winners. In addition to bragging rights and career boosts, both artists won an opportunity to show and sell their artwork at SCOPE Miami during Art Basel in December of this year.

“I’m shocked to have won Red Bull Canvas Cooler among so many amazing artists,” remarked winner Jody Pham (Paired with Pozo) moments after hearing the news, “I just recently started showing my work publicly so to go from that to Art Basel is overwhelming …overwhelming but incredible.”

The Red Bull Curates: Canvas Cooler Project is sure to leave a lasting impression on Oak Cliff native and winning artist, SopaGrapes (Paired with It’ll Do Club), who has practiced his craft with limited means until now. “My art medium is to use whatever I can get my hands on at home improvement stores,” explained SopaGrapes, “What everyone else returns that stores can’t use, I buy and make into art. I encourage every artist out there, young and old, rich and poor, to keep doing their art. It will pay off.”

In addition to the winners, two artists from each Red Bull Curates: The Canvas Cooler Project are entered into a pool to vie for the overall People’s Choice Award— the victor receiving an opportunity to also exhibit and sell their artwork at SCOPE Miami. The two artists entered into the pool from each city are chosen based upon the number of tweets received using a custom hashtag the night of their Curates event. The winner of the overall pool will be announced in November. From Dallas’ event, Allison Jardine and Leighton Autrey were chosen to move forward and vie for People’s Choice Award. Over 1,000 Tweets were counted in the People’s Choice Vote.