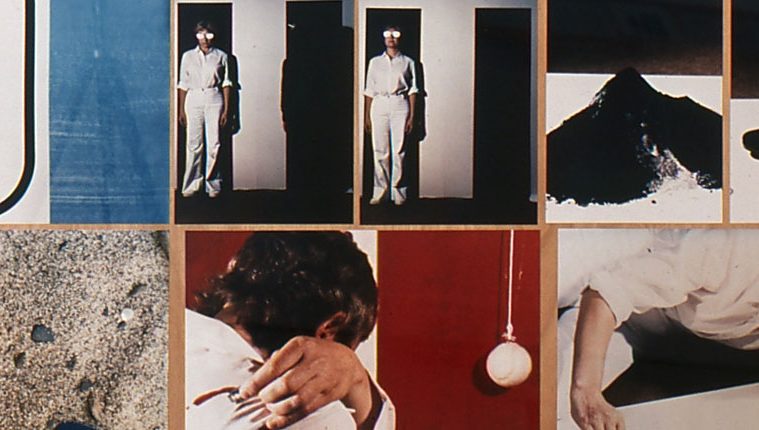 Curator Dean Daderko muses that firsthand interaction with a human body may be something that people are missing today, adding that, in an age in which signing petitions online counts as a form of activism, people sometimes forget the importance of a body on the street. “There is power in performance and seeing a body in front of you,” he said.

Daderko aims to put that power on prominent display in Parallel Practices: Joan Jonas & Gina Pane at the Contemporary Arts Museum Houston, showing the artists in action — in videos displayed on monitors and within installations; in photographs documenting performances, shown on their own or incorporated into other artworks; and in one of Jonas’s performances that will be executed by freshly-trained Houstonians (arriving within the exhibition during the last eight weeks, to be staged at set times). Drawings, sculptures and more will also be on view.

The better-known of the two, Jonas (b. 1936), was an American who has worked predominantly in New York.  Pane (1939-1990) was an Italian who lived and worked in France. Both forged careers using various media, including performance, in the 1960s — when minimalism was the dominant trend and second-wave feminism (then referred to as “women’s lib”) was just taking root. The exhibition is intended to act as two solo shows in one gallery with dedicated space for both.

Recognition has bloomed in recent years for Jonas, who teaches at the Massachusetts Institute of Technology and won Aurora Picture Show’s annual Aurora Award in 2011. New York Times critic Roberta Smith called her 2003 solo show at the Queens Museum of Art overdue and said its “revelations are almost guaranteed to knock you sockless.” In 2010, when the Museum of Modern Art presented a new iteration of a Jonas installation conceived in 1976, Smith’s Times colleague Karen Rosenberg said the show “suggests that Ms. Jonas’s art has a longer-than-usual lifespan because it’s constantly being reborn.”

Jonas was one of the first artists in the United States to have videotaping capabilities. In 1970, Jonas returned to New York with  a new PortaPak video camera, courtesy of Sony. Her early work involved interacting with a live feed of herself with editing done in-camera, focusing on what she has called the technical/spatial problem of the relation of the camera to the monitor, the space and the performer.

This can be seen in Glass Puzzle, one of two major installations on view, in which Jonas and dancer Lois Lane mirror each other in coordinated movements. The performance was recorded by Babette Mangolte, an experimental cinematographer known for documenting the downtown New York art scene (including dancers like Trisha Brown, with whom Jonas trained, as well as performances at Judson Church).

Jonas’s other major installation will be the more recent Reading Dante III, part of a series that combines drawing, personal narrative and early performances with explorations of Dante’s work and mythology. The piece began as a staged performance with Jonas drawing, shown on one of the video channels; three others are edited to explore additional narratives. Portions of drawings created during past performances will be collaged together on the walls.

Other selections from 40 years’ worth of Jonas’ career will include photographs, drawings and videos, and she will travel to Houston to train local performers to present Mirror Check, in which a dancer uses a handheld mirror to inspect the body in choreographed movements.

Works on view by Gina Pane will range from 1967 to the mid-1980s, including sculptural work, photographs, videos, and late-career Partitions that address saints and martyrdom. Pane was a French artist of Italian origin. She studied at the Ecole des Beaux-Arts in Paris from 1961- 1966 and was one of the founders of the 1970s Body Art movement in France, called “Art corporel”. She taught at the Ecole des Beaux-Arts in Mans from 1975 to 1990 and ran an atelier dedicated to performance art at the Centre Pompidou from 1978 to 1979.

Daderko said that Pane is well-loved in France but is less well-known in the United States, in part because the work was made in French and also because she died young – aged 51, in 1990. She is not forgotten — Marina Abramović recreated one of Pane’s performances in Seven Easy Pieces at the Guggenheim — yet Parallel Practices will be the first comprehensive presentation of Pane’s work in the United States.

Pane’s early work focused on interactions with the landscape, like using a mirror to reflect light into a furrow in a field and then burying it. From there she moved into the “actions” for which she is best known: grueling performances in which she inflicts pain on herself.

Some of these performances can be seen as protests, as Pane was disillusioned with the Vietnam War. Escalade non-anesthésiée (Non-Anesthetized Climb), for instance, featured Pane repeatedly climbing a ladder-like structure with sharpened metal jutting up from the cross rungs, so that she pierced her hands and feet. When I asked Daderko if people might find pieces like this hard to view, he offered Pane’s words: “when you see blood, it is your own.” He interpreted this to mean that when someone evokes pain there is an automatic transference:  Viewers imagine themselves in that situation.

To that end, the installation will likely rouse viewers out of any existing apathy but may not be for the weak of heart. Photographs documenting the performance will be displayed with the “ladder” in what Daderko described as a type of diptych.

Other inventive ways that Pane has used documentation from performances include her fascinating constat d’actions, or “certification of actions.” Made by collaging photographic documentation with drawings and/or text into something akin to non-linear storyboards of the performances, the works extend the reach of her ephemeral actions. Daderko mentioned Paul McCarthy’s photographs of performance props as a comparison point, but said Pane’s “certifications” are “unique—unlike anything I’ve seen in any other artistic practice.”

Daderko hopes that Parallel Practices will allow viewers to have substantive experiences of each artist’s work, piecing together the threads that weave through their practices. Those who spend too much time online can seize this opportunity to engage with real bodies in action.

— DANA MATTICE
Dana Mattice is a writer and artist who lived in Houston for seven years and continues the love affair from the wilds of Northern Minnesota.