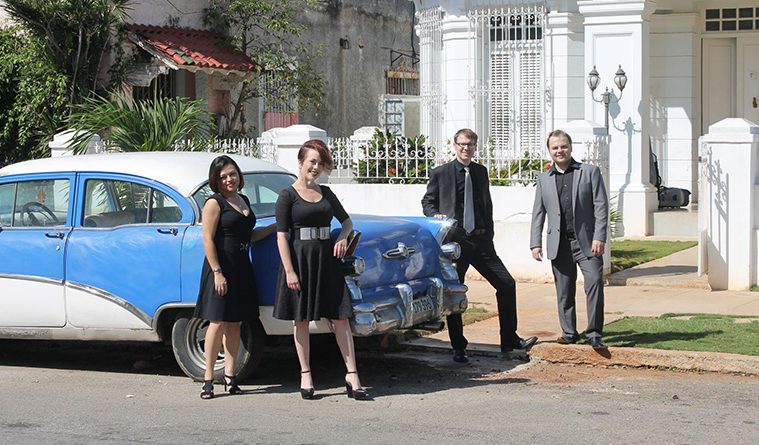 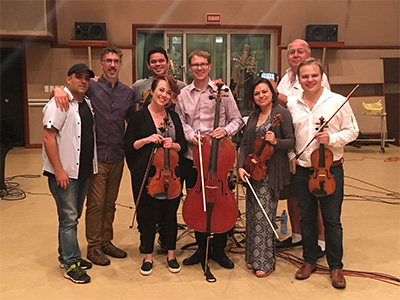 Amid the hearty shouts of  “Cuba Libre” punctuating the final exuberant moments of Arthur Gottschalk’s Imagénes de Cuba, Houston’s Apollo Chamber Players capped off their historic performance/recording tour in Cuba with a lively retrospective concert at the Institute of Hispanic Culture upon their return to Houston.

Since 2008, this classical chamber music ensemble, including founder, artistic director, and violinist Matt Detrick, violinist Anabel Ramirez, violist Whitney Bullock, and cellist Matthew Dudzik, has thrived on taking one bold step after another in its mission to create synergy from rich folk traditions, classical forms, and new musical styles. So it is perfectly fitting that its first international performance should be in Cuba, whose very soul is entwined with the music that emerges from its soil, conjuring an extraordinary mix of African, Spanish, Puerto Rican, Chinese, jazz, and indigenous influences.

One cannot speak of Cuba without considering its politics, especially in regard to its tumultuous relationship with the United States over the last 60 years, from the Cuban Revolution to the Missile Crisis, to the break of diplomatic relations and the long embargo that followed. When the musicians of Apollo sat down with Rice University composer Arthur Gottschalk to talk about ideas for the 7th work of their 20×2020 commissioning project in 2014, they learned that Gottschalk, inspired in his youth by performing in salsa bands among exiled Cuban musicians, had devoted two decades of his life to researching the music of Cuba, making several trips to Cuba in the process. The result of this commission, Imagénes de Cuba, premiered by Apollo Chamber Players at the MATCH in May of 2016, is the product of Gottschalk’s lifelong interest and accumulated knowledge. Meanwhile, just a few months after the commissioning of this Cuban-inspired work, President Obama made a landmark announcement normalizing diplomatic relations with Cuba after a 53 years-long break; he lifted travel restrictions, allowing Apollo to explore the possibility of making a trip to Cuba as music ambassadors. 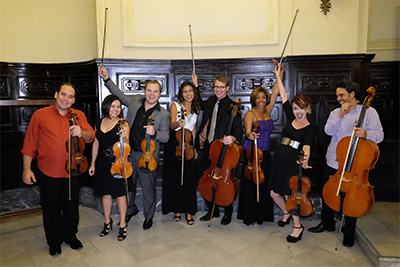 Under the auspices of Parma Recordings, whose previous exploratory trips had yielded connections with Cuban musicians, recording studios, and government entities, Apollo landed in Cuba mid-January for an eight-day sojourn to record and perform in this once closed-off island nation.

The recording sessions took place in the world-class Abdala Studios, managed by the Cuban Ministry of Culture, in the heart of Havana. Gottschalk had rewritten parts of his piece to feature elaborate passages for the virtuoso Cuban percussionist Adel Gonzalez Gomez, and the Apollo musicians jammed to the Cuban rhythms played on bongos, guiros, claves, chekeré, and cowbell (of course!).  In an inspired moment, the Cuban music producer Dayron Ortega came out of the recording booth dancing and playing his guitar, to help the musicians find the groove they needed to get through the grueling 12-hour recording session. They were only mildly surprised that Gomez brought along a bottle of rum to finish off the session.

A trip like this is bound to have a few surprises. An impromptu interview on Cuba National TV? No problem. A joint performance with the Cuban string quartet Amadeo Roldán? Even better. The public concert, the first joint performance of an American and Cuban chamber ensemble in 50 plus years, took place at the ornate National Museum of Fine Arts, Apollo Chamber Players spoke directly to the Cuban people through the music, channeling the diverse spirit of America through Libby Larsen’s Sorrow Song and Jubilee, Texas composer Julia Smith’s string quartet, and Turkish composer Erberk Eryilmaz’s gypsy-inspired Thracian Airs, concluding the evening with an homage to the people of Cuba with Gottschalk’s Imagenés de Cuba. The event was made even more meaningful by the side-by-side performance with the Cuban quartet, who played Piazzolla and Cuban composer Leo Brouwer’s Gershwin arrangements with a Latin flair. 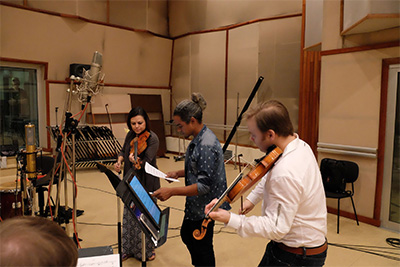 There was Professor Jose Elladio Amat, the music historian who presented a comprehensive two-day cultural workshop for the musicians, giving them an intense introductory course on the history of Cuban music and Cuban rhythms (rumba, son, salsa, mambo, etc.) that encompass such a diversity of cultures and religions.  Dudzik adds, “Cuba is a mini-melting pot, like our country, and this is reflected in the complexities and subtleties of the varied rhythms in Cuban music.” And the most important thing Detrick absorbed?—That a marriage between Cuban music’s foundation of rhythm and Western music’s gift of melody is a beautiful thing. On this point Detrick had a story to share: “To illustrate how rhythm is the underpinning that can make a beautiful melody more compelling, Jose sang the Star-Spangled Banner, which he thought was the most beautiful melody in the world (‘we Cubans don’t have anything like that’), then he sang it with a Cuban beat, and it was so much better!”

The best way to get to know a country is through its people, and Apollo found it easy to make friends. There was Jorge, who has a Master’s degree in Microbiology and dreams of working for the CDC in America, but is working as a security guard at their house because he could only make $40 a month working in a research lab in Havana. There was Ronnie the driver, who rigged his 1957 Plymouth with a black market iPhone and speakers plus subwoofer in the ceiling, hoping one day to go to Texas to drive monster trucks. There was the woman selling peanuts in the Cathedral Square, who spontaneously began singing “Manisero,” the famous peanut vendor protest song that is the inspiration for the first movement of Imagenés de Cuba.  There was the 87-year-old accountant for the house who reminisced fondly about his days working in the U.S. before the embargo. There was the music producer Dayron, who was deeply moved by Apollo’s rendition of “Guantanamera” in the second movement of  Imagenés de Cuba—written and played in such an introspective way as to provoke a deep nostalgia in the listener for the Cuba that was. Beyond the quoting of Cuban songs, the undercurrent of silent protest and of this music’s compelling power in times of oppression came through naturally in the land of its birth.  As Detrick reflected, “Freedom is on the march in Cuba. You can hear it in the people’s voices, in their stories, and in their dreams.” 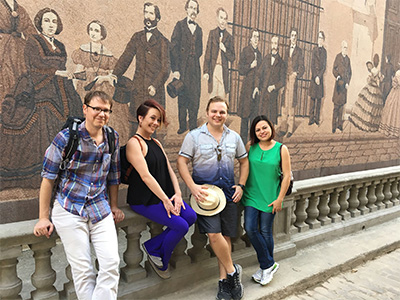 Among the special guests at the Cuban retrospective concert was Lorenzo Martinez, author of the award winning memoir Cuba, Adios. He was one of 14,000 unaccompanied children airlifted out of Cuba in Operation Peter Pan between 1960 and 1962 to escape Fidel Castro’s regime. Visibly moved by Apollo’s performance and the stories shared, he spoke about hope for the future of his native country.

Soon after Apollo returned from Cuba, the group embarked on a cross-country tour, which culminated in a three-day residency at Seattle University that included lectures on arts entrepreneurship and non-profits, as well as master classes and performances. Apollo also made its second appearance at Carnegie Hall, performing Syrian composer Malek Jandali’s string quartet based on melodies from “Aleppo,” in a concert attended by ambassadors and dignitaries from the UN, Human Rights Watch, Syria, Turkey, and Armenia.

You can catch Apollo’s next concert  “Andean Walkabout” on March 31 at the MATCH, which will be followed by the season closer, “An Irish Odyssey” on May 5 also at the MATCH.