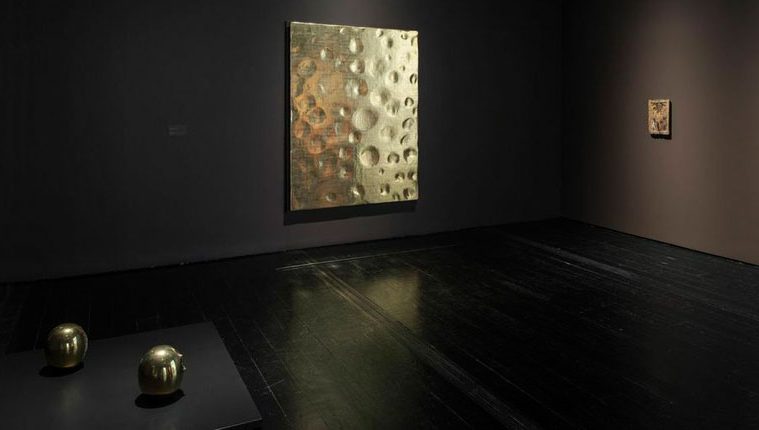 Byzantine Things in the World 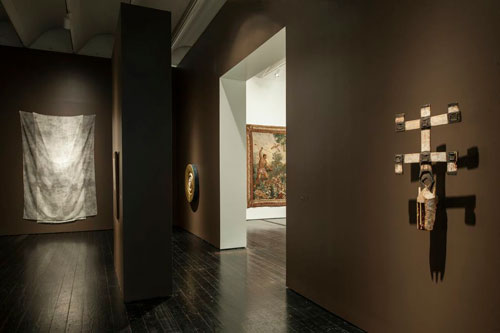 No exhibition in recent memory better exemplifies what the Dominican priest Father Marie-Alain Couturier is said to have told a young Dominique de Menil after her conversion to Catholicism – that a museum “is a place where you should lose your head” – than Byzantine Things in the World. In fact, viagra sale if you don’t lose you head while immersed in this Menil Collection show, purchase which juxtaposes some of the museum’s Byzantine icons, stuff crosses, pilgrim tokens and reliquaries with objects from other cultures and periods, take that as a sign that you need to have your soul examined.

Guest curator Glenn Peers, professor of early medieval and Byzantine art at the University of Texas at Austin, cites the indispensable influence of former Menil curator Kristina Van Dyke, who left in 2011 to direct the Pulitzer Foundation for the Arts in St. Louis, on the conceptualization of the show. Indeed, no one who saw Van Dyke’s 2006 show Chance Encounters: the Formation of the de Menils’ African Collection can help thinking of it here. (Not incidentally, Menil curatorial assistant Susan Sutton worked with Van Dyke on that show and with Peers on Byzantine Things.)

But if Peers, as I told the first person I ran into after my first visit to the show, “has out-Kristina’d Kristina,” perhaps it’s because unlike Chance Encounters, Byzantine Things isn’t about John and Dominique de Menil and their relationship with the art they collected, but about the objects themselves and the power their makers hoped to unleash. I’m referring not just to the Byzantine objects, but to what Peers describes as “like-minded things” made by modern artists such as Mark Rothko, who thought viewers who wept before his pictures understood him best, and Ad Reinhardt, who wrote that his “‘climactic-dark-paintings of the fifties” were “indescribable, of course but some kind of ‘Byzantine-Godless-neoplatonist-amid [a] pure-land (not Zen) Buddhism-dissolved geometry.’” (When his work is seen the usual way – in the company of other abstract paintings – Reinhardt’s assertion might seem like so much hot air, the kind he and Barnett Newman, whose emphatically vertical, double-“zip”-wide Untitled (Number 2) from 1950 also makes an appearance, were prone to spew. Here, in the company of other cross shapes – which Peers says Byzantines saw as the building blocks of the world – it seems totally matter-of-fact.) 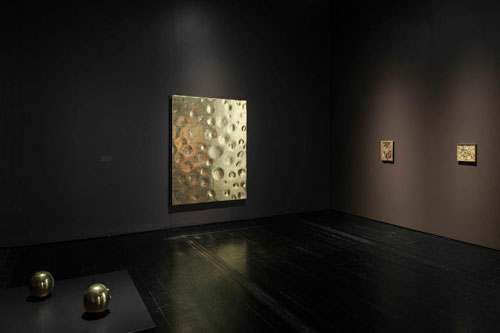 I’m also referring to what Peers considers “like-minded” non-western things such as a formidable cow-like boli, or power object, made by the Bamana people of Mali, believed to “emerge and take form in a thick flow of energy known as nyama,” as Sutton writes in the fascinating catalogue. “Everything is infused with it, and an exchange of energetic matter between things is constant. Nyama is an animating force, charging people, the landscape, and objects with life.” A similar kind of animism, Peers says, drove Byzantine thing-makers, which is why the show, for all its cross-cultural eclecticism, includes no Islamic or even Catholic art, making his uncanny fulfillment of Couturier’s mandate for museums an even niftier trick. It’s also why he insists on calling the objects he’s assembled – nearly all of which are drawn from the Menil’s holdings – things instead of art.

“Contrary to the contemporary conception … in which works of art are considered inert and passive, dependent upon the viewer’s gaze, Byzantines saw these objects as dynamic and changeable, fully capable of affecting the world,” Peers writes in the gallery brochure. “And in that sense, to call them ‘art’ is to sign the death certificate for Byzantine material culture; it suppresses their living, active aspects.”

Perhaps nowhere are these “living, active aspects” more evident than in the most gold-filled room of the exhibition, which makes sense since, as Peers writes, Byzantines saw the precious, workable metal as “a potentially living element that brought its animate and animating qualities to every thing it made.” 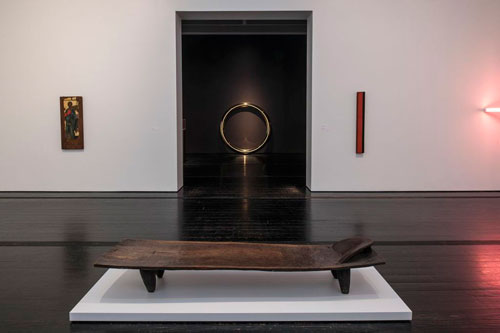 Reminiscent of past Menil shows such as Chance Encounters, the exhibition lives up to Father Marie-Alain Couturier’s ideal of the museum as “a place where you should lose your head.” Photo courtesy of the Menil Collection.

Dark, with objects lit in a powerfully theatrical way, the room balances modestly scaled icons and Robert Rauschenberg’s equally portable 1956 Untitled (Gold Painting) against Yves Klein’s large, almost unbearably tactile gold-leaf-on-wood Untitled (Monogold) (ca. 1960), James Lee Byars’s The Halo (1985) and a ravishing Rothko multiform. A pair of shiny, irascible Lucio Fontana sculptures, their off-spherical forms evoking bombs about to go off, their gashes implying stigmata, refused to settle easily into the room, Peers and Sutton said, but eventually led the curators to the perfect place. (Good for the Fontanas for putting up a fight.)

More than holding its own against all these heavyweights is a miniature gold reliquary less than two inches tall. “The box, despite fighting in a lower weight-class, still gives as good as it gets,” Peers aptly writes. “It is an animate thing in the room and its life is irrepressible once it’s allowed to speak.”

Only occasionally does Byzantine Things fall into what artist Daniel Buren (who’s not in the show) has called the “exhibiting exhibitions” trap, in which, as he wrote in Frieze in April, “exhibitions are increasingly becoming opportunities for an organizer or curator or whoever to write an essay which usually has nothing to do with the artists invited, but concerns only his or her philosophy about art and society, politics or aesthetics.” While Peers’s essay is convincing on why the sculptor Donald Judd should be considered a maker of “like-minded things” to what the Byzantines made, the Menil’s one Judd, a drab green Formica-like shelf, represents Minimalism at its coldest and most sterile, lacking the essential power other Judds contain. As Donald Rumsfeld might say if he were a curator, “You go to exhibit with the Judd you have, not the Judd you might want or wish to have at a later time.” But who wants Rumsfeld organizing a Menil show?

Fortunately, such missteps are vanishingly rare and hardly fatal to this enchanting assortment of “like minded things modern and non-western.” That this show also sidesteps the “exhibiting exhibitions” trap of making points about the people who collected the objects on view – there’s not a word about the de Menils in the brochure – makes it, in the end, the ultimate homage to Dominique de Menil, who asked, “And what is art if it does not enchant?” Peers, one suspects, would even let her off the hook for saying “art” instead of “things.”