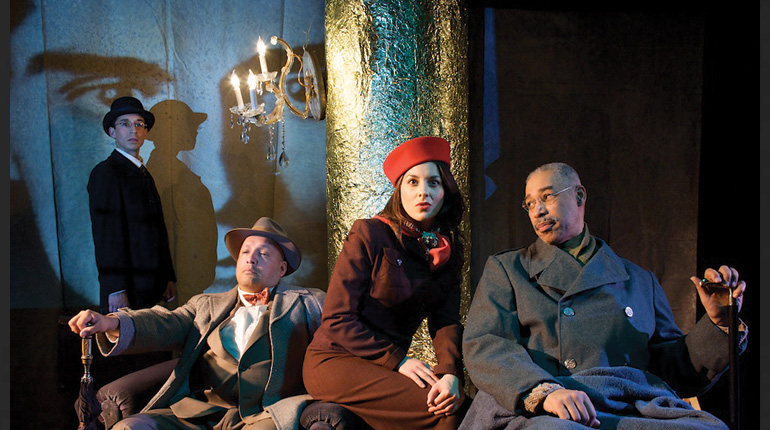 If spring symbolizes birth and celebrates the new, healing then this spring, health North Texas stages are about to go into labor big-time. More than any other season in recent memory, it looks like theaters all over the Metroplex are trying out plays that are either brand spanking new, or just a few years old. Interesting, a high number of them are from local playwrights (or who have ties to North Texas), but even for the ones that aren’t, the newness is still something to get excited over.

Here is a chronological list of 15 productions of plays that are new or newish (a few are six or seven years old, but haven’t been locally produced yet), and why you need to see them. We’ve also included a few performance festivals that you can’t pass up.

“Collapse” at Kitchen Dog Theater: In this “rolling world premiere” (two other theaters in the National New Play Network are doing it too), KDT company member Allison Moore — an SMU grad and current Minneapolis resident — writes a drama that deals with the Interstate 35 bridge collapse in Minnesota. www.kitchendogtheater.org

FEBRUARY 3–26
“Free Man of Color” at African-American Repertory Theater: Charles Smith’s 2004 drama tells the story of a freed slave who became the first African-American to enroll in Ohio University. www.aareptheater.com

FEBRUARY 10–25
“The Early Education of Conrad Eppler” at Echo Theatre: This “divine comedy” with a large cast is from Dallas playwright Isabella Russell-Ides, and the third of Echo’s three world premieres of plays found in their Big Shout-Out Playwriting Contest. www.echotheatre.org

FEBRUARY 11–MARCH 3
“Mean” at the Ochre House: Matthew Posey’s latest is a musical about Charles Manson. Before he went all Helter Skelter. www.ochrehousetheater.com

FEBRUARY 18–MARCH 17
“Time in Kafka” at Undermain Theatre: Undermain’s relationship with New York avant garde writer Len Jenkin continues with this world premiere about a professor who follows a dream he had in which Kafka left an unknown novel at an Italian insane asylum. www.undermain.org

MARCH 2–APRIL 15
“Tigers Be Still” at Dallas Theater Center: The Theater Center is full of new works this spring, having just opened “Giant” and with the upcoming repertory productions of the plays “God of Carnage” and “Next Fall,” but look out for this quirky comedy from emerging writer Kim Rosenstock. Interesting because it will be performed in the Wyly’s upstairs studio theater, where the “Beauty Plays” happened in 2010. www.dallastheatercenter.org

MARCH 8–24
“Prayer” at Nouveau 47 Theatre: This theater is all about new works this season, too. In this premiere from Jonathan Kravetz, a man is thrown into a prison for writing a revolutionary book. www.nouveau47.com

MARCH 15–APRIL 8
“Midwest Trilogy” at Second Thought Theatre: And Second Thought is big with the new works this season, too. This is Dallas writer and filmmaker Eric Steele’s three-part work that includes his one-man show “Bob Birdnow’s Remarkable Tale of Human Survival and the Transcendence of Self” that was seen at the Festival of Independent Theatres in 2011. www.secondthoughttheatre.com

MARCH 24–APRIL 14
“The Whipping Man” at Circle Theatre: This one is fresh from a 2011 off-Broadway premiere. In Matthew Lopez’s drama, set in war-ravaged Virginia, a Jewish Confederate soldier and two freed slaves face the harsh reality of post-Civil War life. www.circletheatre.com

MARCH 30–APRIL 22
“August: Osage County” at WaterTower Theatre: This Pulitzer- and Tony-winning drama from Tracy Letts about a dysfunctional family from hell has its area debut in a production directed by Rene Moreno. www.watertowertheatre.org (and in other Letts news, Theatre Three does his even newer “Superior Donuts,” March 19–April 15; www.theatre3dallas.com)

APRIL 12–29
“Mr. and Mrs. Fitch” at Amphibian Stage Productions: A comedy about married gossip columnists by Douglas Carter Beane, who wrote the book for the musical “Lysistrata Jones” (which began in Dallas as “Give it Up!”). www.amphibianproductions.org

APRIL 25–MAY 19
“The Better Doctor” at Upstart Productions: The area premiere of a twisted comedy by Matt Lyle, a former Dallas writer and current Chicago resident. www.upstarttheater.com

MAY 12–JUNE 17
“Red Hot Patriot: The Kick-Ass Wit of Molly Ivins” at Stage West: This Fort Worth theater has a kick-ass season, and this one-woman play about the unforgettable liberal columnist is one of the most anticipated on its lineup. www.stagewest.org

MAY 18–JUNE 10
“Broke-ology” at Jubilee Theatre: Nathan Louis Jackson’s family drama is getting lots of national buzz, and Tre Garrett directs its regional premiere, in a co-production with Houston’s Ensemble Theatre. www.jubileetheatre.org

MARCH 1–14: 11th Annual Out of the Loop Fringe Festival at WaterTower Theatre www.watertowertheatre.org