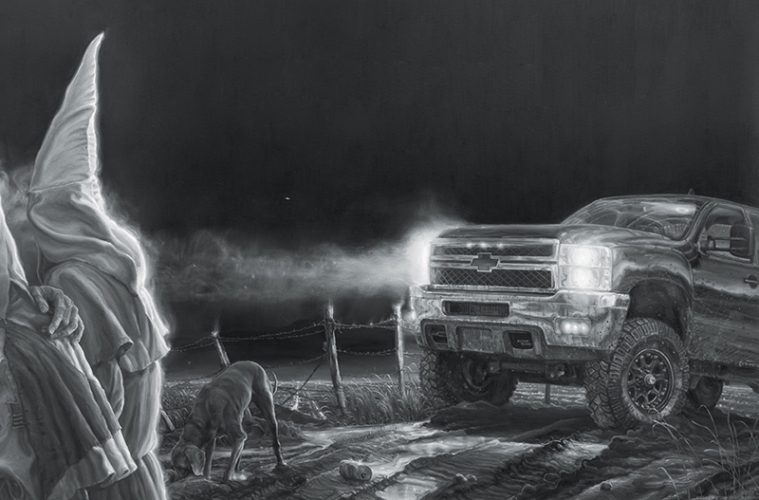 Contemporary History: Vincent Valdez’s ‘The City’ at the Blanton Museum of Art 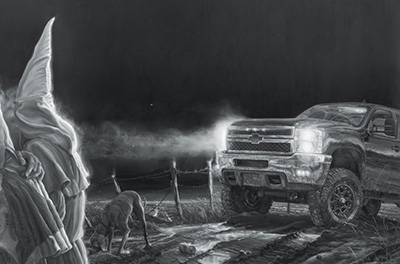 Artist Vincent Valdez visited Austin in 2015 to see the exhibition Witness: Art and Civil Rights in the Sixties at the Blanton Museum of Art.

“Immediately I asked myself, how many more generations of American artists will need to tackle subjects like the Klan?” Valdez recalled recently.

On the drive back to San Antonio, where he then lived, Valdez couldn’t shake Guston’s bitterly cartoonish image. And he began to recall Gil Scott-Heron’s version of the 1950s folk song “The Klan.”

Valdez got to work as soon as he got home. “There was something really brewing in my head and I started to flesh it out on one single piece of paper.”

But then he took out another piece paper, then another. After several hours, Valdez had six sheets of paper on which he had drawn related images of a tableau in black-and-white, an unsettling scene of Klan-robed figures.

Over the next year, those drawings would become a pair of monumental paintings known as The City. And though they debuted at Houston’s David Shelton Gallery (garnering an opinion piece in The New York Times), the paintings will have a wide public showing in the ongoing exhibition at the Blanton Museum of Art beginning July 17.

Stretching 30-feet over four panels, The City I depicts a nighttime gathering of a group in Ku Klux Klan robes and hoods. They stand on a bluff, the twinkling grid of a city behind them. One holds a cellphone, another, with clearly female hands, clutches an ordinary pad of ruled paper. Yet another holds a baby who is also hooded. The hooded group of ten looks back at us as if we had just interrupted them. A cellphone tower looms on the left. On the right, an expensive-looking new model pick-up truck is parked, headlights on.

While it is clearly situated in our contemporary times, The City I is less about a particular era or specific place. Instead, it’s an indictment — in a virtuosic large-scale grisaille painting — of what Gore Vidal called “The United States of Amnesia” or America’s inability to ever learn from its past.

“My portrayal of Klansmen, women, and child are caught in ‘ordinary’ acts and gestures. They are human. This was intentional. Hatred is learned. It is passed on,” said Valdez in an email. 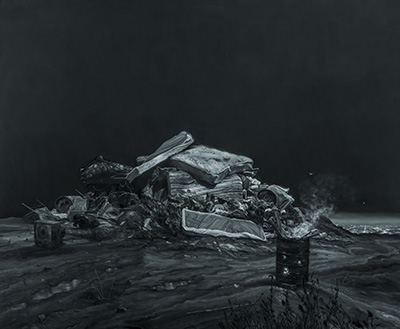 “I am disturbed by the fact that this scene is still a reality in America today. As a Mexican-American, I am equally disturbed by some Americans’ unwillingness to comprehend that the brutality of racism and intolerance affects many more Americans than we tend to think of in more ways than one. It has, and still is, wreaking havoc on an entire nation and society. America remains trapped between the fantasy of past and the reality of our present. We stand on unsteady ground between the illusion of what we think we are and the reality of who we really are.”

The more enigmatic one-panel The City II depicts a pile of mattresses amid a trash heap, also on a bluff, also in nighttime with the twinkling city below. Smoke wafts up from a fire in a metal barrel in the foreground. Valdez offers The City II as symbolic representation of The City I, the mound of mattress a metaphor for the heaps of social and political dysfunction prevalent in American society, and the bodies left by violence against people of color and difference.

“I used the title to examine the ways in which covert racism exists daily but is not often contemplated with obvious symbols like the Ku Klux Klan,” says Valdez. “The designs of many American cities today still reflect segregation.”

Valdez points out that beyond such obvious divisive actions as segregation laws, urban policies like governmental eminent domain seizures of property, or redlining, the systematic denial of services to residents of neighborhoods of color or low income.

The development of the nation’s cities, Valdez says, have long kept “the American population and its communities divided. This is still being determined by economic class and skin color.”

Veronica Roberts, the Blanton’s curator of modern and contemporary art, organized the museum’s presentation of The City, and situates it in an art historical context of history painting.

“For centuries, artists, writers, and musicians have dealt with questions of identity, fear of the ‘other,’ and the threat of violence,” said Roberts. “I see [The City] as a contemporary history painting, helping us to reflect on the ways the past continues to inform the present. Valdez is a virtuosic painter tackling some of the most challenging aspects of American identity and culture.”

Indeed, history and social justice lie at the core of Valdez’s work. While still a teen in San Antonio he painted politically-charged murals. Years later, for his BFA show at the Rhode Island School of Design, Valdez painted, Kill the Pachuco Bastard! which depicts the Zoot Suit Riots, a violent white uprising in 1943 against Latinos in Los Angeles. 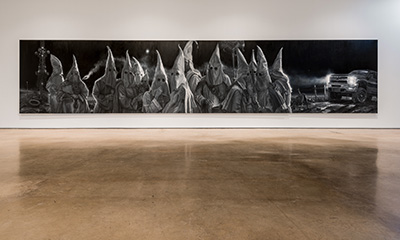 He’s netted the Texas Commission on the Arts State Artist award in 2015, and more recently, the Joan Mitchell Foundation Grant for Painters and Sculptors. His paintings have been exhibited at the Los Angeles County Museum of Art, The Museum of Fine Arts, Houston; Parsons School of Design Museum, Paris; Fundación OSDE, Buenos Aires; among others.

Before acquiring The City paintings, the Blanton had already acquired two paintings from Valdez’s Strangest Fruit series for its permanent collection. The series is Valdez’s exploration of the mostly unknown history of the lynching of Mexicans and Mexican-Americans in Texas.

The large paintings show full-bodied Latino men in contemporary clothes — jeans, hoodies, basketball shirts and sneakers. Some are heavily tattooed. They seem to float against a stark white background, limbs limp, hands bound. Valdez leaves out the lynching rope, but deliberately situates the violence in our here and now. History is present, always.

“I confront difficult and challenging subjects in the studio,” Valdez said of his practice. “This has always been my way of trying to make some sense of the world, by observing it consciously.

I don’t presume that painting can change the world. But I hold firm in my belief that art still provides critical moments of clarity in times of chaos and immense distortion.”

The Blanton has displayed its pair of Strangest Fruit paintings since 2015.

And the museum began work on its presentation of The City last year. Since then the museum has convened numerous roundtable discussions with scholars on campus and community representatives. A special page on the museum’s website offers scholars’ short essays, reading lists, and other information.  A symposium is scheduled for Sept. 27. In July, Valdez will be joined in a public discussion with journalist Maria Hinojosa.

And Valdez has always maintained, it is the art-viewing public who will add context to The City.

“Unlike any painting in my past, this work has provided me with further insight in deciding when to step back to allow a work to become a life fully its own,” said Valdez. “The viewers, the curators, the writers, the critics, the admirers and the haters will evolve it into something else, something very different than it originally was. I am but one part of the creation of this work once it journeys out into the world.”