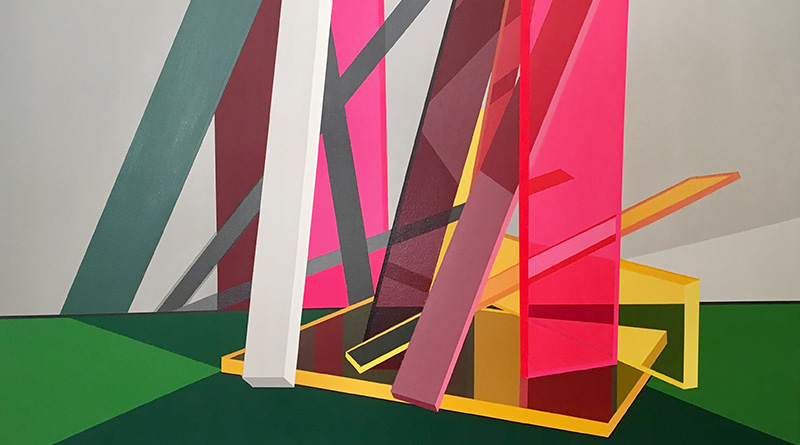 The artist was inspired by an unrealized Frank Lloyd Wright project designed in 1940 called Crystal City, a utopian suburbia outside Washington D.C. Ahead of its time, it included what we refer to today as “mixed use” development, with several office and residential towers, restaurants, and entertainment centers. Too progressive to come to fruition, the extant examples we have available are preliminary drawings and the Price Tower in Bartlesville, Oklahoma, which closely resembles the architectural style in the original plan.

Fitzpatrick was drawn to the modernist aspects that Wright employed in designing the structures as well as the geometric planes that clad and topped the buildings with a mixture of glass, white marble, and bronze. Fitzpatrick asked himself what fragments or ruins might the site have left us now, had it been built?  The material detritus screams postmodernism—an amalgamation of the ruins of what the project would have been, what the artist calls a type of “fallen utopia of modern materials,” perhaps pointing enthusiastically toward a new future. He also draws on ideas from earlier in the modernist canon, expressed in the abstract art of Russian Constructivism, a movement that proposed art could be used to build a new society after World War I.

Fitzpatrick is a consummate formalist who exhibits flawless technical skill in handling paint so that the planes and forms on canvas look like actual objects in real space. By painstakingly depicting light and shadow, his trompe l’oeil compositions seem to have reflective qualities, imbued with translucent, layered mirror effects.

In Campanile, several red and blue rectangles reach the length of the vertical canvas and rest on a white pedestal. A central blue form may represent the bell tower from the title, and it casts a curious blue shadow. It may even suggest an artificial contrivance, only found in a future world. In Cross Vault, the blue, white, and glass-like shapes, crisscross in extreme angles that take them beyond the picture plane and out into infinity. Possibilities abound as to what they actually represent: lines of communication, office towers, highways of the future, or even public art sculptures?

With Quadrangle, the largest painting in the exhibition at 70×80 inches, the viewer stands before a dense arrangement of white and blue monoliths positioned at various angles. A section of white background in the painting hints at an opening, perhaps the only way out of a seemingly enclosed space.

By starting with architecture and models, and using illusion to translate the properties of physical space onto a flat painted surface, perhaps Fitzpatrick’s intent is to retrieve information and ideas from the avant-garde in order to repurpose them for our present era, where the need to design and rebuild whole societies is at hand.