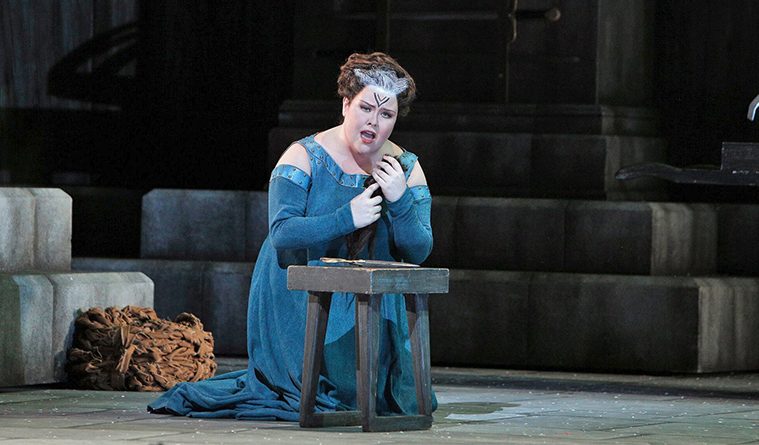 Jamie Barton in the San Francisco Opera production of Norma. Barton appears as Adalgisa in Houston Grand Opera’s production of Norma, April 27-May 11 at the Resilience Theater in the George R. Brown Convention Center.
Photo by Cory Weaver. 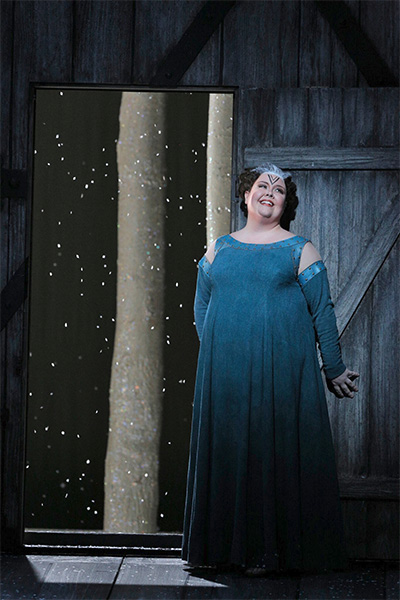 “I say this with absolute ultimate pride: I introduced Christine Goerke to Dubsmash at Mai’s in Houston. It was one of my proudest moments as a friend and as a colleague,” declares Jamie Barton, one of opera’s brightest stars, who returns to Houston Grand Opera in Bellini’s Norma, April 27 through May 11.

She’s talking about a hilarious Dubsmash video she made with Goerke, the two divas maniacally lip-synching to the Despicable Me minions’ cover of The Beach Boys’ Barbara Ann. It went viral across social media platforms, confirming Barton as a decidedly 21st Century Diva.

What exactly does that mean? For Jamie Barton, it means a total rejection of old school attitude in favor of genuine warmth and accessibility. Hence her social media savvy and presence. “I think it’s completely undeniable these days that it’s such an easy avenue to be able to connect with fans,” says Barton. “Everybody for the most part is on social media, especially the younger fans. I connect with a lot of them on Instagram and Twitter, and a lot of my older followers connect with me on Facebook and Twitter as well.”

Barton genuinely enjoys the accessibility her high social media profile brings: “I get fans that come to the stage door and talk with me and say ‘I’ve never been to a classical music concert, but a friend of mine retweeted you or shared something. So I saw what you do and saw that you were here, and I thought I’d come and try it out. And I loved it!’ And that happens with some regularity.”

But there’s also a practical side to social media. Other followers, Barton explains, become a grass-roots publicity machine: “They’re sort of the fan-based Energizer Bunny of PR. They really get the word out which is so important and so nice.  I see the audiences kind of averaging out on the younger side these days, even from 10 years ago, when I was just starting out. And I love to see the vitality of the audience continuing.” 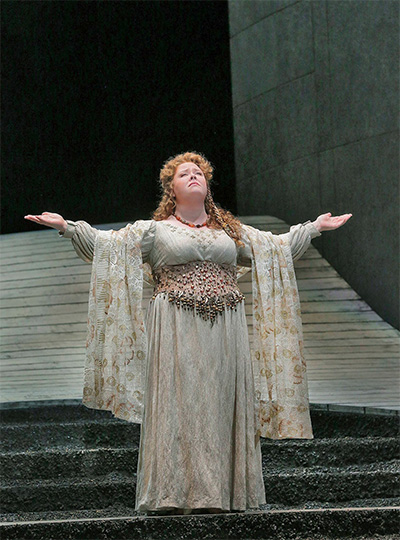 Jamie Barton in the LA Opera production of Norma.
Photo by Ken Howard.

If accessibility defines Barton’s offstage persona, then onstage her hallmark must surely be versatility. Her repertoire seems to defy categorization. “I stand very firmly by the fact that I am a mezzo-soprano, even though a lot of people have questioned that.  Some have told me I’m a baby dramatic soprano, some have told me I’m a contralto. But ‘mezzo’ is the only thing that I feel very black-and-white about. Am I a full lyric mezzo, or am I a dramatic mezzo?  I have a lot less invested in that. One of the things I love doing, and I feel I do very well, is settling into the style of whatever music I’m singing. If I’m singing Verdi, my goal is to sound like an appropriate Verdi mezzo. If I’m singing Baroque, then my goal is to mold my voice to that particular style, while still staying true to my voice. If I say I’m a dramatic mezzo, then no one’s going to hire me for Handel. I do as much as I can to bring a lot of variety to my schedule to keep me interested, to keep my voice pliable, and for career longevity.”

When choosing new roles to take on, Barton says it usually comes down to tessitura; where in her vocal range does the role spend the most time? And as it turns out, tessitura plays a big part in the role that brings her back to Houston: Adalgisa in Norma.  Explains Barton: “There are different key options for some of the harder bits, and the difference between them is the high key has me singing some high Cs, the middle key has me singing Bs, and the low key has me singing B-flats. It’s not like we’re knocking it down a third so the audience could hear a difference. The approach to the high C in the first duet isn’t so bad.  But in the second duet it’s absolutely brutal. To put this in perspective, Joan Sutherland preferred it in the lower key, and I know that for a fact because Marilyn Horne told me. So I feel okay going to companies and saying ‘I don’t do it in the high key anymore, but I’m totally flexible between the middle key and the lower key.’”

So what does Jamie Barton think about singing in The Resilience Theater at the George R. Brown Convention Center? “I’m so proud of HGO,” she says, “and honestly, as a former Houston Grand Opera Studio member this is very much my home opera house. To be able to be a part of this season and be part of the effort to continue HGO through adversity…I’m proud! I think this season is one that will go down in the history books.”