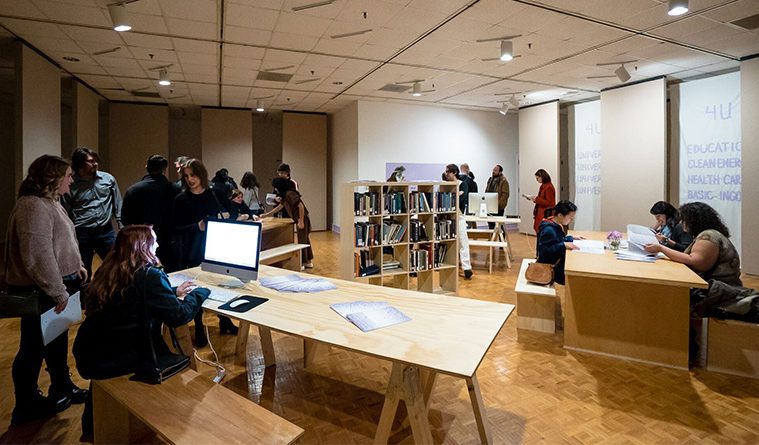 Dropout By Dropping In: The Co-work Space for Potential Dropouts at Pollock Gallery

A Friday evening event in the Pollock Gallery’s Co-work Space for Potential Dropouts. 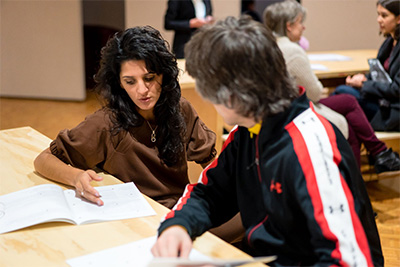 Curatorial Fellow Sofia Bastidas at one of the “Hacking the Common Sense” events in the Pollock Gallery.

The co-working space has rapidly entered the realm of the ubiquitous; the communal tables and the beanbags, the televisions fixed on CNN, and the obligatory coffee bar have become the visual signifiers of the freelance or, if you’re an optimistic millennial, future economy. You’d be hard pressed to find anyone who hasn’t at least been exposed to this workplace of the future which promises a release from the windowless cubicles and soul-crushing work and workplaces of earlier generations. The ubiquity in conjunction with the inherent Utopian promise of the co-working space of course, makes it the perfect subject for an artist.

The Co-Work Space for Potential Dropouts, which will occupy SMU’s Pollock Gallery through March 11, is a project by the artist Avi Varma and curated by Pollock Curatorial Fellow Sofia Bastidas. They describe the space as “a debt and grade free experiment in education,” and Varma announces in an essay included in the catalog that accompanies the exhibition, that his co-work space intends to ask the question: “What would art be if it exited the indeterminate, stuff-making paradigms of Contemporary Art?”

Varma’s inspiration came from several places: his own, self-described experience of “dropping out” of the art world, the ways in which the incubator space (the art world equivalent of the co-working space) were/are being appropriated by the art market, as well as questions concerning art-making itself in the 21st century, specifically, how could an artist move past the indeterminacy of interpretation? In other words, how could Varma formulate a work of art that was more prescriptive than subjective? 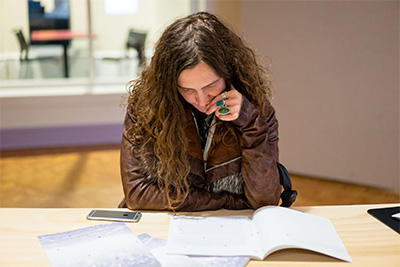 For Varma, the co-working or incubator space is a new form of ready-made; a recognizable large-scale piece of social infrastructure, inspired by art historical precedents such as Robert Smithson’s “non-site,” in which one site is brought into the gallery in a new way that is related even if not visibly to the real space, as well as Malevich’s Suprematism, and the notion that the links between words, signs and objects are delicate and therefore can and should be exploited

And indeed, the Pollock Gallery has been outfitted with all the requisite accoutrements that identify it as a co-work space, only this time there’s a twist. Instead of CNN, the televisions in the space feature two films: one serves as a promotional video for the space and features the reverberant voices of two young artists promoting a space where one can “learn to hear your hair grow,” “learn to detox from common sense,” and “learn to drop out.” The film describes Varma’s venue as an alternative to the reality of the corporate university’s universalist debt regime situated within the university itself, as well as a way to explore what art could be (the video is a nice, succinct summary of Varma’s project as a whole and you can watch it online). In the adjacent film, visuals of cheering graduates, happy families, and serene nature are juxtaposed behind the platform positions of an imaginary political party that calls for universal basic income and healthcare among other progressive values.

Those values of the “4U: political party also appear on banners at the back of the space, behind a bookshelf which features an array of texts on artists, environmental issues, and critical theory.

In addition to the space itself, the installation includes a fictional course catalog and a website, which takes the show outside the gallery walls. The catalogs, which are available in the gallery, as well as the website, feature a wealth of fictional course listings and suggested readings submitted by a number of artists, writers, and other culture workers informed by critical theory and radical politics. Members of the co-work space for potential dropouts could, in theory, sign up for courses on think tanks, proto-human software, feoclassicism, space law, and ecologies of excess, just to name a few. 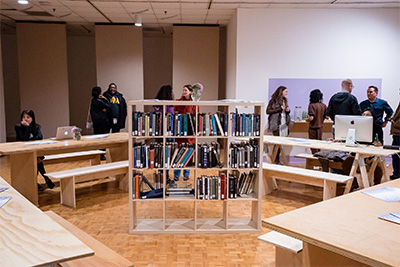 A Friday evening event in the Pollock Gallery’s Co-work Space for Potential Dropouts.

Like previous projects, Bastidas has curated into the space, Varma’s project, by inviting and really demanding interaction, satirizes while also drawing attention to the underutilized spaces of the university art gallery. Of course, Varma would like people (especially artists) to use the space like an actual co-working space daily, but in order to ensure the space is used he will be hosting a series of “interpretive performances” in the gallery collectively entitled “Hacking the Common Sense.” The performances will consist of visitors participating in some of the “independent research projects” detailed in the catalog under the guidance of Varma, Bastidas, and others, and will take place on Friday nights during the show’s run.

Varma’s project operates on so many levels it’s difficult to pick one on which to focus. At the most basic level, Varma has brought the ready-made or Smithson’s non-site into the 21st century critiquing, in the process, some of the hyperbole surrounding the art market but also the future of work and its motivations. Dig just a little deeper and he’s responding, as so many of his contemporaries, both artists and otherwise, to previous generations insistence on education as key to future success; an insistence that led to the pervasive funneling of children and young adults, no matter the cost, into universities where they are fed information “necessary” to their development and future. We know the result of this now: a generation of people working under or un-employed and saddled with a lifetime of un-repayable debt.

It’s assuredly time for an alternative and Varma is also proposing, through his installation, just that. Instead of focusing on productivity as dictated by the market, this co-work space, which Varma states is meant to be a generative project, will focus on the individual and learning not for successes sake, but for its own, arguing in the process, that these are the things that hold the key to not only success but sustainability. It’s the individual that will lead us past capitalism and into our potential future, and for the individual to be free to do so, he or she will have to “hack the commonsense;” he/she must be led past the typical approaches to art and politics that simply aren’t working.

It’s also, for Varma at least, a show about art, and an experiment in moving past the primacy of the spectator’s interpretation in our experience of it. Just as the video asked what art could be if we were able to escape the market, so Varma is asking what art should be in the 21st century. What should it do. Perhaps in order to escape the “stuff-making paradigms” we’ve come to expect in art, art must move from the illustrative to the prescriptive, into the realm of the actual.