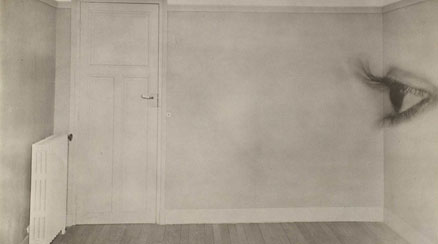 Faking It: Manipulated Photography before Photoshop

In photography circles, the decades-long debate continues between darkroom and digital. Purists argue that the richness, warmth and depth of a print brought to life through the marriage of negatives, positives, paper and chemicals still cannot be achieved by even the most drool-worthy of high-tech, archival-quality inkjet printers and papers. Conversely, technophiles swear by their beloved technologically enhanced, impossibly crisp, overtly and covertly altered and often otherworldly masterpieces. Enter the Museum of Fine Arts, Houston’s Faking It: Manipulated Photography before Photoshop exhibit, which bypasses the debate altogether in favor of highlighting the photographic artist’s obsession with tinkering and transforming, which as it happens is as old as the medium itself and doesn’t require Photoshop.

Organized by the Metropolitan Museum of Art, Faking It includes images that employ the practices of painting, merging negatives and other darkroom, post-darkroom and camera manipulations from the 1840s through the 1980s. This is the first major exhibition surveying the history of photo manipulation prior to the digital age, and it is both comprehensive and compelling, offering fresh information for savvy photographers and novice admirers of the medium alike.

For its Houston incarnation, MFAH associate photography curator Yasufumi Nakamori made a few subtle tweaks, saying that while the exhibition follows a rough chronology, he decided to do the opposite of the Met’s treatment of oldest to newest and also present it in the more contemporary gallery in the Beck building. His goal is to create a more modern aesthetic and atmosphere for the Houston audience.

“I wanted a more modern, contemporary image to come up in the front, up to the moment when Photoshop emerged in the early 90s,” says Nakamori, who opens the exhibit with the vibrant Chromogenic print, Red Stripe Kitchen by Martha Rosler, from the series Bringing the War Back Home: House Beautiful (1967-72). It features Vietnam-era soldiers “on patrol” in camouflage field uniforms juxtaposed against a modern kitchen, awash in white with pops of red.

What struck Nakamori overall was that the practice of manipulation had been going on for so long. Soon after Henry Fox Talbot invented the calotype process in the 1840s, the early manipulations of overpainting and retouching and repainting on the negative or print came into play as artists strove for a more accurate rendition of reality. Blown out skies gave way to fluffy cumulus creations via merged negatives. Bland black and white photos were brought to life, as in J.I. Williamson’s circa 1882 photo, Clock, in which color is applied to highlight the subject’s gilding.

Photographers soon learned how to cut and merge negatives in order to add or subtract people from photos, a practice which, in its most sinister use, came in handy in the creation of propaganda materials for certain German, Russian and Italian dictators. A less malevolent undertaking was to craft large group photos in situations where everyone couldn’t be in the same place at the same time. The cheekier shutterbugs of course found ways to make the viewer laugh by showing a subject juggling his head or placing a nude woman in a Champagne glass.

Despite — or perhaps because of — the ease and capabilities of technological advances, pre-Photoshop masters of manipulation and illusion such as Jerry N. Uelsmann continue to turn to the quiet solitude of the darkroom to create imaginary worlds. Uelsmann’s 1976 Untitled is prominently positioned at the beginning of the exhibit. The viewer is confronted with a drafting desk situated in a simple, traditional, wood-paneled study complete with a clock over the fireplace. A dramatic, cloud-filled sky floats across the ceiling of the room and a tiny man stands on the desk, defying our sense of place, time, space and reality and leaving us to wonder what sort of laborious black and white magic the artist conjured in his darkroom.

–MELANIE WARNER
Melanie Warner is a Houston-based writer and photographer.