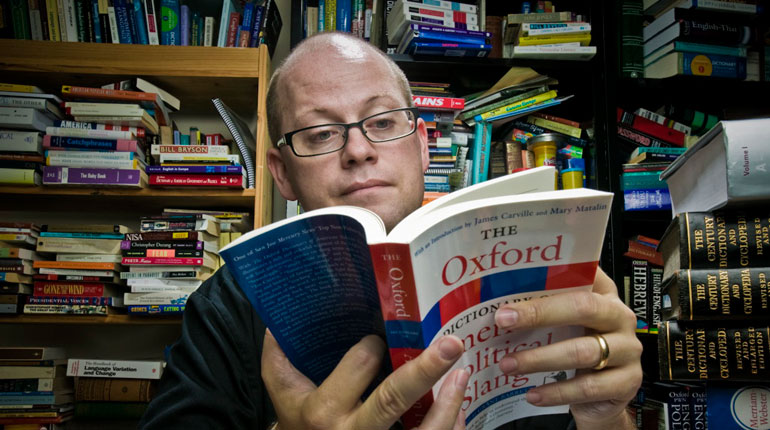 Lovers of clever conversation rejoice and shout Supercalifragilisticexpialidocious. The popular public radio show A Way with Words is coming to North Texas for an evening dedicated to the exploration of language – from syntax and catchphrases to malapropisms and jargon. In preparation for this celebration of all this communication, Arts + Culture recently caught up with Martha Barnette, A Way with Words co-host and author of several books on word origin, to find out just what guests could expect during this evening benefiting the Aberg Center for Literacy.

A+C: Have you done this before, taken A Way with Words on the road?

MARTHA BARNETTE: We’ve done it in Indianapolis, and this is our other big excursion. But we are trying to make sure that people know that it’s not an actual recording of the show like they did with Wait Wait …Don’t Tell Me. We are just coming there and appearing and talking and stuff.

A+C: So then, what can attendees expect?

MB:  Grant (A Way with Words co-host) and I often do tag team things where I speak for 20 minutes then he speaks for 20, and then we take questions. That often goes forever; the Q&A is the best part. Listeners have so many great questions. We are also throwing in some extra exciting things like a quiz with Mayor Mike Rawlings.

A+C: You have an extensive background as an author and reporter, but how did you come to fall in love with language?

MB: I’ll be talking about that some during the event. My love grew out of probably my favorite failure. I was flunking out of ancient Greek and found a tutor who completely turned me on to language. I not only went back and passed class, but the next year took as much ancient Greek as I could and went on to do graduate work in Ancient Greek. That’s how I fell in love with word origins and seeing the little poem packed inside of every word. Ralph Waldo Emerson called each language “fossilized poetry.” That’s the thing I love talking about on the show, those stories packed inside a single word.

A+C: How would you recommend people go about expanding their vocabulary?

MB: Well listen to the show, of course. We like to tell people to read, too. And read stuff that you wouldn’t ordinarily read. Read stuff at a higher level than you are used to reading. I know that takes some effort, but I personally love reading books and essays by people who send me running to the dictionary. I may disagree with William F. Buckley or George Will, but I enjoy reading their work because they introduce me to new words.

A+C: You get a lot of interesting, obscure word and phrase call-ins on the show. What’s a recent call that stumped you?

MB: (Pausing) Hmm. I’m stumped. I guess it’s rare that we get stumped.

A+C: That means that you are true sleuths.

MB: Now see, sleuth is a great word. I wrote a whole book on animals that lurk in the language inside different words. Like the name Melissa is the Greek name for honeybee. The longer version of sleuth is sleuthhound and referred to bloodhounds. There are all these linguistic tracks hiding in plain sight. I like helping people see those tracks that are in plain sight.

A+C: Listening to the show it seems like North Texas is particularly well represented in call-ins; are you making that up?

MB: Grant and I can joke that we know when the show is on in Dallas, because our phone goes nuts and our e-mail completely explodes. Texans really love to talk about the way they talk.

A lot of it is people talking about expressions learned from their families. You know, “Grandma used to say this…” Or they are Yankees who have moved to Texas. They are talking about standing “on line” and people laugh at them because, you know, in the south you stand “in line.”

We had a great call from a guy from Texas about Slang Jang. It’s a dish made out of black-eyed peas and a lot of spices. He thought his family was the only ones who made it, but turned out that there were lots of people who knew about it. We got all these calls from people who said, “of course we know Slang Jang.” That’s one of the things we love on the show, too. There are so many times when you grow up with a word and you think everyone knows it, and then you move to a different part of the country or someone moves to your town and you are completely misunderstood. I grew up in Kentucky and remember going to school in Upstate New York and saying, “Don’t tump that over” and people were saying, “What?” (Note: to “tump” is to tip or turn over.)

A+C: What’s the connection between A Way with Words and the Aberg Center for Literacy.

MB: Our show is produced by an educational non-profit organization, Wayword, Inc., here in San Diego that has the same kinds of values when it comes to literacy organizations. That’s what we did when we partnered with an organization in Indianapolis. We’ve also participated in an adult spelling bee in San Diego, which was very nerve racking but fun. KERA is also such a good friend to us.

A+C: So from the “things you didn’t know about Martha files,” we learned that you are also part of an improv troupe. How did that come to be?

MB: That part is a blast. I started taking improv because I am a southerner and Grant is a New Yorker, and I just felt like he is so much faster at everything than I am. I wanted to learn to think on my feet a little bit faster. I’m a writer and tend to think about things for a long time before I say them and that doesn’t do so well on the radio. You know, long periods of silence. And I just wanted to keep up with my speedy co-host. So I started taking these improv classes about three or four years ago, and just fell in love with it. Our motto is “dare to suck big.” If you screw up and people laugh at you because you are being stupid or failing, then you have actually succeeded. It’s a great way to get outside of my head. For me, it’s about discovery. As a writer you do so much solitary work. This is like team sports for the brain.

A Way with Words benefitting Aberg Center for Literacy