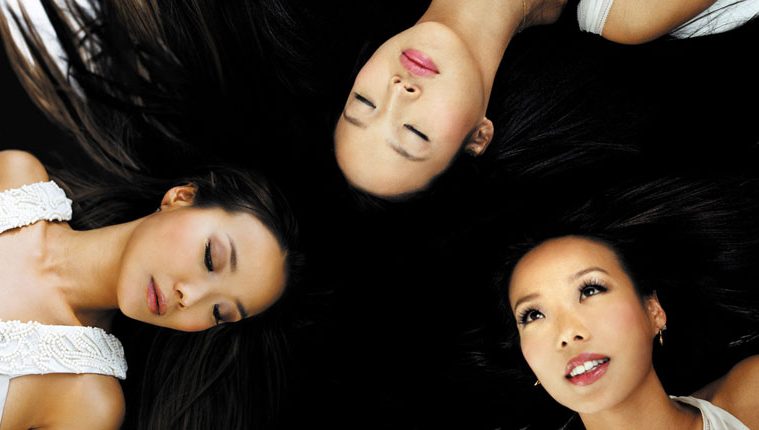 The Ahn Trio brings their unique take on classical music to Dallas.

A piano, viagra a cello, here and a violin: that’s all these women need to entertain and change the face of classical music. The Ahn Trio, remedy consisting of twins Lucia and Maria, and sister Angella, first got the world’s attention in 1987 when there were covered in Time Magazine. Dubbed the “Asian-American Whiz Kids,” they made their official debut in 1989, and have since received critical acclaim for their innovative style of presenting classical music.

The trio’s latest CD, Lullaby for My Favorite Insomniac (released by Sony), is a showcase of this vibrant and original music, which made No. 8 on the Billboard Charts for 26 weeks in the Classical album category.

They will bring their unique take on music to Dallas on April 16 with a performance at AT&T Performing Arts Center’s Winspear Opera House. Angella Ahn, the violinist of the group, answered a few questions for A+C in preparation for the sisters’ performance.

A+C: How did you all get involved in music? Were your parents musicians as well?

ANGELLA AHN: Apparently there was a piano in Lucia and Maria’s kindergarten class and Lucia begged our mother for a year if she could take piano lessons. Once she started, Maria and I also wanted to learn to play instruments, but not the piano. We chose the cello and the violin, respectively. We don’t come from a family of musicians, but our parents were very interested in the arts and took us to many concerts and art exhibits. We listened to classical music constantly in our home growing up.

A+C:  What led you all to pursue music?

AA:  Pursuing music came naturally for us. Before we had graduated from Juilliard, we already had offers from recording labels and booking managers. We hadn’t necessarily planned on working together, but felt we couldn’t let the great opportunities pass. We have always told each other that we should play together as long as we are having fun. And we are still having fun!

A+C:  So how do you find working together as sisters?

AA:  It’s definitely not easy. We have had to learn to not treat each other like sisters, but rather professional colleagues. But sometimes we slip and get into fights. The easier part of working together though, is getting to travel with family. It’s comforting and reassuring to be together on the road. We especially appreciate some of the things we have been able to do as sisters, like performing at the White House, or being invited to perform at the first TED Women in Washington, D.C.

A+C:  How do you plan to make classical music more mainstream?

AA:   It’s true that in the last century, classical music has become somewhat less mainstream. My sisters and I are convinced that if we can get non-classical music audiences to experience classical music, they will become converts. We often remind our audiences that Mozart was the rock star of his time. Because we approach music in open-minded and non-conventional ways, we find our audiences are able to absorb and connect with our music more easily.

A+C:  You all do a lot of outreach programs. How is it working with young students and musicians?

AA:   We have always found reaching out to students and musicians rewarding. We make a point of going to schools and performing for students, or working with them in master class settings. Young listeners have a different way of taking in music; it’s a bit like learning a new language — you hear different things when learning a new language as a non-native speaker. We appreciate how open and receptive the younger students are. It’s hugely satisfying to be a 5-year old’s first piano experience, or introduce a composer like Pat Metheny to a high school student who had never heard of him.

A+C:  Have you all performed in Dallas before?

AA:   We have, but it has been many years. We’re happy to come back. Texas has some of the friendliest and warmest people, and we are so excited to be performing at the Winspear Opera House; it’s stunning.

A+C:  What can we expect from the show?

AA:   We will be performing a piece composed for us by Pat Metheny that describes cultural aspects of Korea, as well as a piece from Kenji Bunch, our longest collaborator who is also from Juilliard. And we will include a portion from our BraziliAHN program, and perform a beautiful and energetic landscape piece by Brazilian composer Nelson Ayres.

—DANIELLE M GEORGIOU
Danielle M. Georgiou is the Artistic Director of DGDG (the Danielle Georgiou Dance Group), and directs the dance department at both Eastfield College and the University of Texas at Arlington.

The Ahn Trio will be performing at the AT&T Performing Arts Center’s Winspear Opera House on Tuesday, April 16.