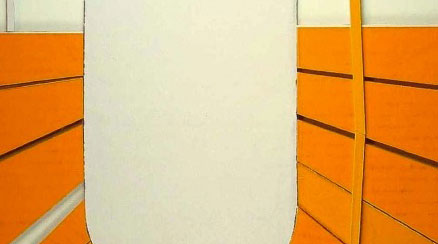 Dallas has another new art space in Deep Ellum. Liliana Bloch, the former director of the McKinney Avenue Contemporary (The MAC) and later gallery director for Kirk Hopper Fine Art, swung open the doors of her own gallery last week.

The gallery’s its inaugural exhibition: Parameters by New York-based artist Ryan Sarah Murphy, featuring collaged works on paper made from found, colored cardboard and graphite. Referencing architecture and the interplay between urban and natural environments, these elegant collages climb across the paper while invoking odd terrains, landscapes and skylines.

As the primary building block in her compositions, Murphy’s use of cardboard is derived from her enduring interest in common, repurposed materials. The characteristic simplicity, wide abundance and inherent impermanence of the material coalesce to reflect the collage’s grounded yet transient essence. Murphy describes her collages as the “tenuous meeting points between architectural and abstract elements.”

Born in Rutland, Vermont in 1978, Ryan Sarah Murphy received her BFA from the School of Visual Arts in 2001. She is currently a studio member at the Elizabeth Foundation for the Arts in New York. Her Dallas show ends May 4.

The Liliana Bloch Gallery will represent emerging and mid-career, regional, national and international artists working in a variety of media. It is partnered with another popular art space on Commerce Street,The Public Trust. Bloch received a Bachelor of Science in Economics from The Jesuit Central American University in El Salvador. She holds a Master in Business Administration from INCAE Business School in Costa Rica.