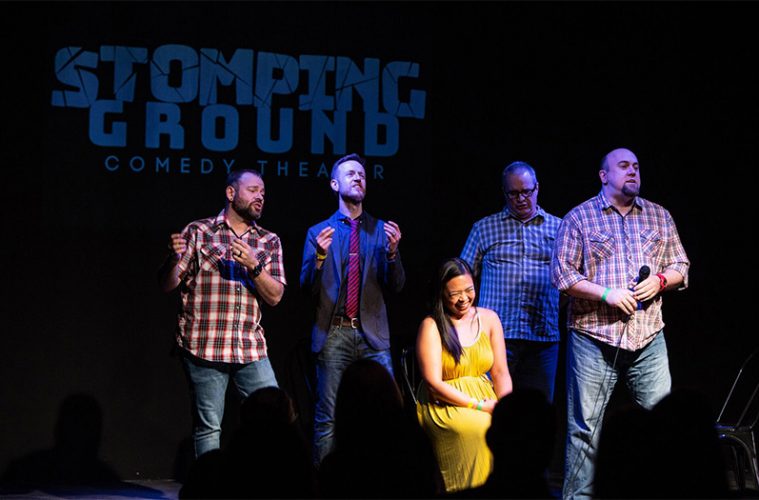 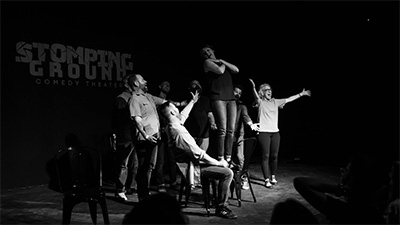 In a newly rehabbed, 75-seat black box theater, tucked behind Peticolas Brewing Company in the Dallas Design District, two men are pretending to tour a home. A third man, playing their real estate agent, points out that the house is a tremendous deal and that replacing blood-soaked carpet is easy.

“Excuse me, did you say blood?” asks one man worriedly.

“Excuse me, did you say carpet?” asks the second, flapping his hands in horror.

The improvised line — they’re all improvised, actually — gets a huge laugh from the audience, who are there to celebrate the grand opening of the first nonprofit theater in Dallas that’s dedicated entirely to comedy and improvisation. Though it’s technically been operating since 2017, Stomping Ground Comedy Theater & Training Center didn’t get to enjoy its official debut, in its official new home, until June.

“Opening a theater is crazy,” says managing director Lindsay Goldapp. “But we felt really strongly that our brand of comedy was not really being done here, and so we needed to be the ones to do it.”

But even though Stomping Ground is here to get laughs, it’s not just about the funny stuff. The nonprofit also focuses on the therapeutic benefits of comedy, offering classes and workshops for people on the autism spectrum and those living with Alzheimer’s, dementia, brain injuries, anxiety, and social anxiety, as well as special classes for their caregivers. Called Improv for Life, the program is run by licensed professional counselor Andrea Baum, who pulls from her extensive mental health training and experience when developing the classes. Program advisor Jocelyn Tiner, who has a master’s degree in social work, and Mental Health Advocate (that’s his actual title) Brandon Davidson also play big roles within the program. 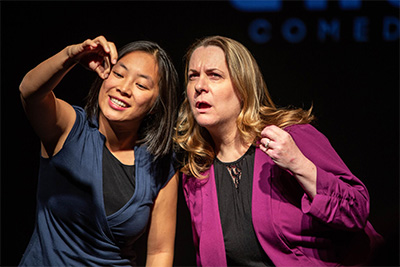 To help people understand that brains learn better when they’re having fun, Stomping Ground also works closely with charities, advocacy centers, organizations, and schools. They offer scholarships, discounts, and internships to ensure that comedy is accessible to all.

“Improv is this thing that’s very silly and that we do for fun,” says Goldapp, “but when you’re telling people that it really does help your brain, you need to prove that science agrees.”

After attending the inaugural “Yes, And” Mental Health Conference — which unites medical practitioners and researchers with improv performers — together in 2017, Goldapp and Baum realized that there was a real need for what they wanted to do. Goldapp had recently returned to Dallas from Chicago, where she graduated from Second City’s Improv Conservatory. Her husband, Cameron, had also performed with the Second City, as well as famed Chicago improv groups Annoyance Theatre and iO.

“When we connected with our old friends, we found this bustling improv community full of people who had trained all over the country: The Groundlings, Four Day Weekend, Comedy Sportz — the list went on and on,” says Goldapp. “There’s so much knowledge in the brains of everyone involved. We thought, we’ve just got to share this and make Dallas a comedy city.”

One of the first obstacles Goldapp faced was deciding if Stomping Ground should be nonprofit. Most comedy theaters are for-profit, she points out, but it’s difficult to appease investors when jokes can be so subjective. She called up her friend Allison Tolman, the Golden Globe and Emmy-nominated actress who used to call Dallas home, and asked for her advice.

“Allison told me to stay in Dallas, that the city needed something like this and that we were the ones to make it amazing,” she says. “She pointed me toward a couple of people who ended up being instrumental in turning us nonprofit and said ‘get in their brains.’ I said, ‘I will happily take their brains!’ and then it all started to fall into place.”

Following a successful fundraising campaign — in December alone, they raised $33,000 in just 30 days — Stomping Ground moved into its new home at 1350 Manufacturing St. and began offering classes, performances, stand-up comedy, workshops, and child and teen camps full time. Its weekly musical long-form show, Tall Texas Tales, features a rotating lineup of local celebrities telling true stories from their lives, which the creative team then uses as a jumping-off point for improv sketches. In late June, Stomping Ground hosted its first Improv-a-Thon, a 12-hour fundraiser that benefitted the Alzheimer’s Association of Dallas and featured improv shows, workshops, and classes all geared toward educating and understanding the disease.

“We see ourselves always as students, so our goal is to teach Dallas to continue learning,” says Goldapp. “We all audit our own programs and keep learning from each other, so we want everyone who visits us to always keep pushing themselves, keep finding their creative family, keep finding people to collaborate with. If you feel stale, come to a show or take a class.”