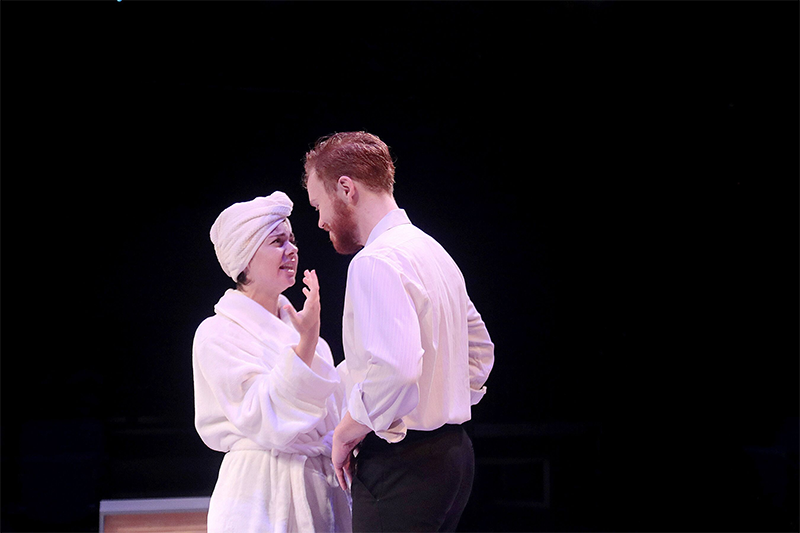 Heart and Mind Synchronicity: ‘The Hard Problem’ at MST

No matter what the subject matter, from quantum to chaos theory, classical to romanticism movements in poetry and gardening, Dadaism to pre-revolution Russian economic philosophy, when you go to a Tom Stoppard play, expect to hear a bunch of very smart people having long, complex conversations about anything and everything in the universe, and yes, that’s even including amicable numbskull Rosencrantz of Rosencrantz and Guildenstern Are Dead. Yet even at his most erudite and occasionally inscrutable, Stoppard takes us beyond the idea play to the existential questions of being human. At his best, Stoppard makes the play of ideas into real human drama, creating a precise balance between head and heart seldom achieved. There might be lots of funny bits, too.

In one of his most recent works, The Hard Problem, getting its regional premiere at Main Street Theater (through Oct. 6), Stoppard goes in heavy on the head, rather literally as the play follows scientists looking into questions of how the brain creates the mind, how we are conscious of our own consciousness.

There is a heart within The Hard Problem, steadily pumping nurturing narrative blood to the brain, but as much as the cast and creative crew put their own passionate into it, the piece never quite gives those glimpses of the sublime found in some Stoppard works, those moments that make our hearts skip a beat.

The character that embodies that emotion of the story is Hilary (Jessie Hyder in appropriate wide-eyed sincerity), a doctoral candidate in psychology looking for a primal goodness in humanity’s genetic makeup. Jumping through six years of her life, we meet Hilary as she applies for a position within a prestigious scientific think tank, funded by the wealthy hedge fund manager, Jerry Krohl (Rhett Martinez). Hilary appears different from Spike (B. Connor Flynn), her tutor/lover and later the fellow scientists at the Krohl Institute, for she believes in the existence not just of God, but of a basic goodness in people. A traumatic, though not actually tragic, experience when she was a teen has helped define her belief system that makes her an alien among the atheists around her. It also sets up something of a holy scientific quest in her life.

On that journey to do and find good, she and the rest of the large cast talk, a lot, about the brain, game theory, mathematical models for measuring empathy and stock markets, egotistic vs. altruistic behavior, the nature of coincidence, and whether evolution or perhaps even God preordains our behavior. There might not be a kitchen sink somewhere within the two hour performance, but there is an awkward dinner party and some burnt cake.

The Hard Problem’s problem lies in just a bit too much thought of the matter and not enough human messy matter of life.

There are a few love story strands woven into the DNA of The Hard Problem, but they aren’t given much influence in the overall makeup of the show. Stoppard poses some intriguing questions on love as the ultimate outlier, something science nor evolutionary theory can never explain, but the actual love stories appear more as another theory discussed rather than a discernible phenomenon in the play.

I saw the show a few years ago at an NTLive screening of the filmed National Theatre production in London. Under Rebecca Greene Udden’s direction, and with help from her designers, especially set (Liz Freese) and lighting (Eric Marsh), this scaled down production is a definite improvement when it comes to creating a more intimate experience, lessening some of the emotional distance I found in the original production.

The cast is overall fine, though with a few overindulgences when it comes to the British accents. However, some of the more intriguing roles, like that of Jerry and scientist Ursula (Callina Anderson), Stoppard doesn’t give them nearly enough to do. But that opinion might stem more from Anderson usually elevating the smallest of roles to characters you want to know more about, and that Martinez is quickly becoming the goto Houston actor for nuanced and amusing portrayals of ruthless executives.

One hard problem for a critic comes when a favorite playwright doesn’t quite live up to his previous work. Udden and her excellent cast and designers take this cerebral story and do add another level of feeling. And there’s no denying The Hard Problem shows Stoppard still firing on all synapses and creating sparks of great thinking drama, but this one just doesn’t quite reach those pinnacles of heart and mind synchronicity.