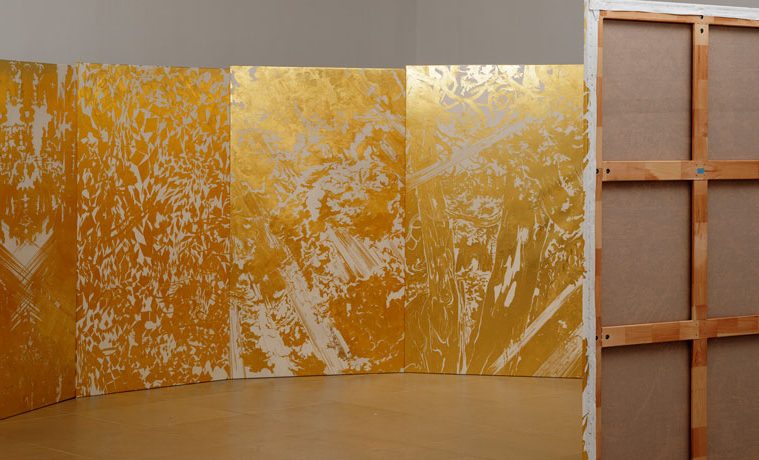 Jim Hodges: Give More Than You Take

As I leaned into the razor-sharp oculus of Jim Hodges’s The Dark Gate (2008), I experienced the memento mori that often haunts his work.

Throughout Give More Than You Take, Hodges’s 25-year retrospective at the Dallas Museum of Art, beauty is laced with the ever-present specter of mortality. Entanglement, life, and death reveal themselves in spider webs, tree rings, and shattered or deconstructed items. 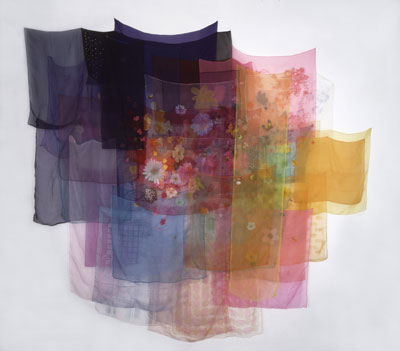 Organized by Jeffrey Grove, the DMA’s senior curator of special projects & research, and Olga Viso, executive director of the Walker Art Center in Minneapolis, Hodges’s first U.S. survey explores themes of nature, color, light, and romantic notions of love, as well as  disassembly and reassembly. Craft fetishism, along with a willingness to explore all manner of themes and media, is highly evident: Give More Than You Take includes photography, drawing, works on paper, objects and light rendered in mirror, light bulbs, and glass, alongside several major room-size installations.

Catalogue contributor Helen Molesworth describes Hodges’s use of silk flowers, metal chains, napkins and other materials as playful adaptations of the readymade by Marcel Duchamp, widely considered the father of conceptual art. The works are big and beautiful, standing well on their own, but their art-historical references cut a wide swath, ranging from Albrecht Dürer to Unmonumental: The Object in the 21st Century, a 2007 exhibition at the New Museum of Contemporary Art in New York.

Originally from Spokane, Wash., Hodges began his career in New York at the height of the AIDS crisis. He premiered his spider-web motif — an ancient symbol of the cycle of life, yet associated with entrapment and subconscious fears —in 1991 with Untitled (Gate), an architectural piece with a blue room and chains that progressively decrease in gauge. The spider web reappears in white brass chains like those in What’s Left (1992), and A Far Away Corner (1997).

No Dust (1996) was created by placing a mirror-on-canvas face down and cracking it with a hammer. The work is linked not only to great Abstract Expressionists like Jackson Pollock and Franz Kline, but also to Italian and Japanese post-war painters such as Alberto Burri, Lucio Fontana and Shozo Shimamoto, whose works are featured at Rachofsky’s The Warehouse.

Other early pieces include intricately-fashioned curtains and pin-mounted displays of silk flowers and scarves, such as Changing Things (1997), Here’s Where We Will Stay (1995), With the Wind (1997) and You (1997). Their scale and delicacy have a sense of awe and nobility about them.

The Dark Gate, installed in the Lamont Gallery, is a crate-like room-within-a-room. It has swinging doors and a single light hanging dead-center to illuminate a circle of steel spikes. Wafting through the room is Shalimar perfume, a nod to Hodges’s mother, whose influence spans his career. This appeal to the sense of smell demonstrates Hodges’s interest in synesthetics — engaging more than one of the senses in a work.

Hodges’s Untitled (Love) (2000 – 2001), a collage of cut sheet music arranged around the word “love,” and Picturing That Day (2002), made of sheet music and Color-aid paper, follow John Cage and Vasily Kandinsky in their synesthetic representations. A cue from Sol Lewitt is present in He and I, 1998, a pink and green wall drawing of interlaced concentric circles based on Hodges and his former lover’s heights.

Most remarkable is the sculpture and still this, 2005-2008, made with ten gold leaf paintings on gessoed linen that illustrate an imagined creation narrative. Each panel increases in size as they curve in a spiral of the golden mean — a sacred ratio in visual composition.

The show overwhelms with its meticulous construction, attention to detail and poignant beauty. Give More Than You Take reveals the arc of this complex and versatile process artist’s career.  Having started out exploring optimistic metaphors of nature, color, light, love and beauty, Hodges ended up dealing with time, deconstruction and the cycle of life.

Jim Hodges: Give More Than You Take
Dallas Museum of Art
Oct. 6-Jan. 12