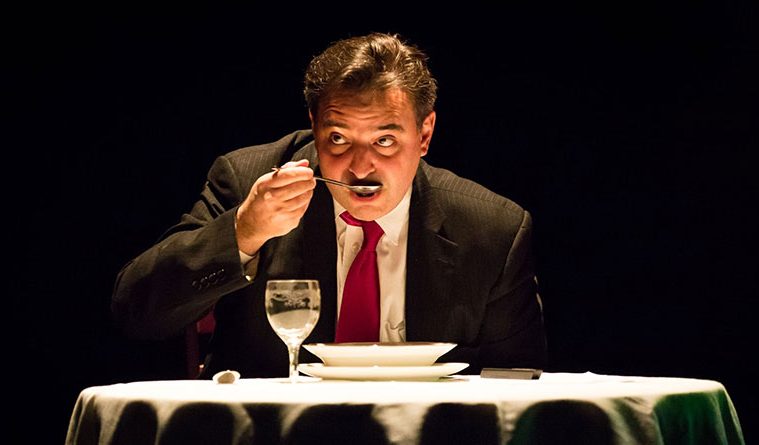 The Fable of the Ancient Children: A Performance Recital with Pablo Helguera, performed at DiverseWorks September 17, 2016.
Pictured above: Pablo Helguera.
Photos by Lynn Lane.
Courtesy of the artists and DiverseWorks. 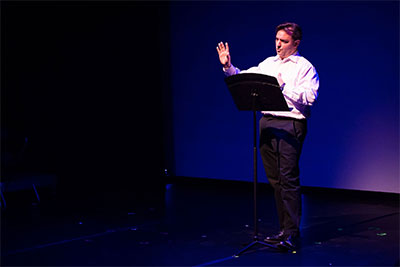 Pablo Helguera’s exhibition The Fable is to be Retold at DiverseWorks (on view through Nov. 19) opened with a performance recital in five parts, each of which considers the ways we learn and imagine, evoked through the lens of youth.  Helguera invites nostalgia for childhood to suggest pedagogical models that critique museum didactics; that is, by looking to childhood from several vantage points, Helguera makes a case for conceptual practice and its relationship to museum education. Although in both the performance and the exhibition the relationships between things sometimes remain fuzzy and the ideas could be more precisely (and perhaps a bit more lightly) worked through, there are some lovely moments in both. Indeed, the most substance, the most emotional punch often comes in subtle moments: quiet gestures or inclusions that might be missed almost always convey more wisdom than the over-explained.

The recital begins with Ivy (1990), the artist’s spoken meditation on the garden in his childhood home, what he describes as his first space of learning, a space where he would walk circles, pacing with the worries and heartache of young love. This is followed by An Epistemological Study of Mock Turtles and their Relevance to the Development of the Avant-Garde (2001), a whimsical literary/art historical lecture connecting the 19th century kindergarten movement to the development of Modernism in the Western world. The first generation of Modern artists and architects, Helguera tells us, were also the first children to attend kindergarten, Friedrich Froebel’s “children’s garden” for learning. 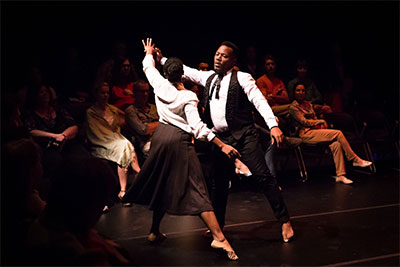 Next, a dance performance choreographed to Scott Joplin’s Solace (A Mexican Serenade) was a bit of an inexplicable (if lovely) interlude, but its melancholy set the tone for Birthday, a spoken piece in which Helguera describes a lifetime of birthdays, painting the aging process as a constriction of time, imagination, space, and opportunity, as life dwindles away. The recital concludes with the performance of The Swan from Camille Saint-Saën’s The Carnival of the Animals. Performed by pianist Tomás Jonssen and cellist Nicholas Wong, the performers’ ages (Jonssen is in high school and Wong is in elementary school) were wonderfully discordant with the maturity of their performance; Jonssen’s careful glances at Wong to follow his cues, and Wong’s intake of breath between musical phrases were fleeting moments, truly wonderful in their innocence. Here, childhood is an intuitive site for some kind of knowledge, and we are encouraged to find the melancholic in their performance. 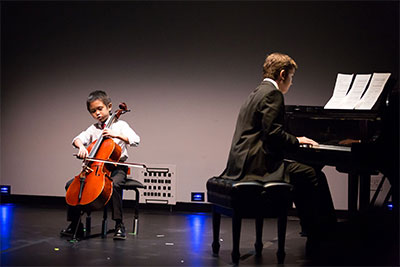 Apart from the performance, the exhibition includes several bodies of work, including multiple series of collages that take the structure of the fable as a kind of philosophical exercise. These could be more cleanly made, more concisely edited. An Ames room built in the middle of the gallery creates the visual illusion of one person being enormous (or quite close to the viewer) and the other person being tiny (or far away). On opening night, it was the perfect site for selfies with friends, and people lined up to play. A small room in the back of the exhibition, however, offered the more poignant and rich observations. The installation is titled Museo de la vida escolar (Museum of School Life, 2016), and it pairs notebooks, report cards, and drawings from the artist’s childhood with photographs from the Gregory School in Houston and photographs of Helguera’s mother’s classroom. There is an abruptness to this juxtaposition that is not fully resolved. These are not the same communities, and without more thoughtful contextualization, the images lose their potential resonance. However, what Helguera seems to be getting at is an articulation of his own educational history as a root for the personal stakes in museum display and pedagogy. If we value the child in the museum, if we give space to that kind of curiosity about the world, our cultural institutions flower (so to speak). 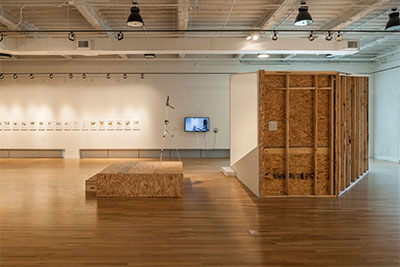 Pablo Helguera: The Fable Is to Be Retold, on view at DiverseWorks September 17 – November 19, 2016. Curated by Xandra Eden.
Photo by Paul Hester.
Courtesy of the artist and DiverseWorks.

Fables often offer a lesson or piece of wisdom. If there’s one thing I hope Helguera takes from his installation at DiverseWorks, it’s that this openness and imagination is a valuable thing in and of itself. Without handouts and didactic blurbs, without meditations on what art is, and what activities a family should do together in the space, the exhibition would be more spare, but also would allow for a sort of poetry, would give the viewer—child or adult—more credit for opening up that imaginative experience for themselves.