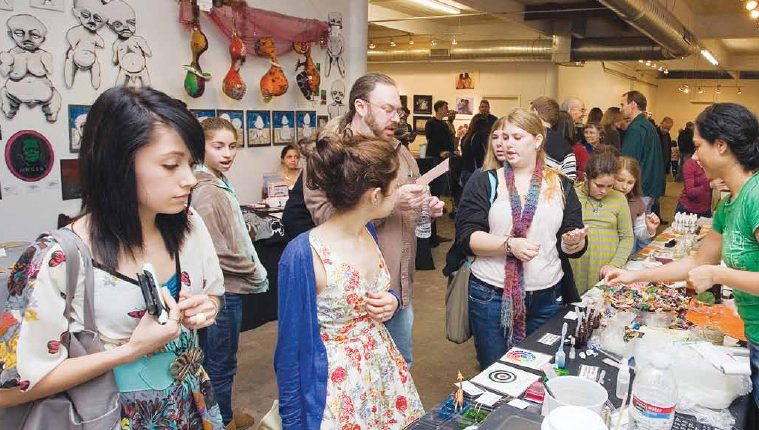 The holidays are upon us, which means one thing, relatives will also be upon us.

Follow the A+C motto for holiday survival, “Get your family out of the house to see some art.” That way, you will have more to talk about than politics and other hot button issues.

There’s the usual fare, like Houston Ballet’s extravagant production of Ben Stevenson’s “The Nutcracker.” This year marks new principal Danielle Rowe’s first go at Stevenson’s version. There’s nothing like the “Nut” to get a glimpse of talent you might have missed. Casting will up on houstonballet.org later this month.

The “Messiah” blasted through my childhood home, so much so, I would walk around belting, “Unto us, a child is born,” off key, of course. You, too, can expose your tykes to “The Messiah for Kids,” composed by Karim Al-Zand, copresented by River Oaks Chamber Orchestra (ROCO) and Houston Chamber Choir (HCC) on December 3.

Then, get a babysitter for ROCO’s evening show, which includes the Christmas portion of the Handel’s masterpiece, along with Franz Schubert’s sparkling “Magnificat.” Both shows are at the The Church of St. John the Divine.

For a rare performance of the entire “Messiah,” go to Mercury Baroque on December 10.

Houston Symphony has “A Candlelight Messiah” on December 15-18.

HCC offers more heavenly voices during Christmas at the Villa on December 10 and 11 at the Chapel of the Villa de Matel.

You can find more cool music for small folks at the Symphony with “The Night Before Christmas” on December 3, with Robert Franz conducting. Franz is the most fun conductor on the planet. I may borrow a wee one to go with.

So, what if you took the kids to see “A Christmas Carol — A Ghost Story of Christmas” at the Alley Theatre last year? They’re a year older now, so their understanding of Dickens’ timeless and timely message on the perils of greed may deepen. This year, both Charles Krohn and his daughter Julia Krohn are in the production. Charles plays the Undertaker and Old Joe, while Julia plays Mary Pidgeon and the Spirit of Christmas Past, the role that the beloved Bettye Fitzpatrick played for many years. Directed by James Black, A Christmas Carol runs November 18–December 27.

Tired of Tiny Tim? Meet Amahl from Menotti’s famous made-for-TV opera. Earthen Vessels Dance Company preforms “Amahl and the Night Visitors” on December 17 and 18 at Houston Ballet’s Center for Dance, and ROCO presents their “Amahl” on January 6, at St. John the Divine.

For fluffier stuff, head on over to Theater Under the Stars for Irving Berlin’s “White Christmas,” where you get all those great songs plus snow, December 6-18.

Is your family prone to yelling? I have just the thing, Stages Repertory Theatre’s “Panto Red Riding Hood,” November 17–December 31. You get to boo at the villain, and other acts of audience no nos. It’s a total blast.

Perhaps you just want to listen to hot babes with pipes. If so, go Stages’ other theater right next door to see the “The Winter Wonderettes,” November 9–December 31.

There’s more fairytale action over at the The Ensemble Theatre, with the African American Shakespeare Company’s “Cinderella,” on November 17–December 20.

Who says you need to see anything remotely related to a holiday? December is a surprisingly busy month for theater. I can’t think of a better reason to skip a Christmas party than sneaking off to see Catastrophic Theatre’s production of Lisa D’Amour’s “Anna Bella Eema: a ghost story to be spoken and sung” at DiverseWorks, December 2-23.

Perhaps you hark from a tribe of shop-til-you-droppers. Bypass the mall and dazzle your family at Spacetaker’s 6th annual Winter Holiday Art Market (WHAM) on November 18-20, where I do my Christmas shopping, mostly for myself, but that’s besides the point. WHAM transforms Winter Street Studios into a bustling fair lined with the city’s finest artisans, all with a party-like atmosphere. For gorgeous home décor, gourmet food, garden, clothing, sporting gifts, novelties, accessories and more, try Houston Ballet’s Nutcracker Market on November 10–13, at Reliant Center. Mom will love it.

Between gawking at the marvels of “Tutankhamun: The Golden King and the Great Pharaohs” at the Museum of Fine Arts Houston, Walter De Maria’s marvelous pole pierced 1955 Chevrolets at The Menil, and Donald Moffett’s compelling projected images at the Contemporary Art Museum Houston, you could do some serious visual art watching before and after the theater.

Finally, it’s not too soon to plan for New Year’s Eve. When people ask me what I will be doing, my response is, “Listening to angels, what about you?” And indeed I will, at Ars Lyrica’s “Bach in Time,” featuring Melissa Givens, Ryland Angel, Zach Averyt and David Grogan, all going down at the Hobby Center with a festive after party. Best wishes for successful art-filled holiday season, and remember, it’s not the time to skimp on your art watching budget.