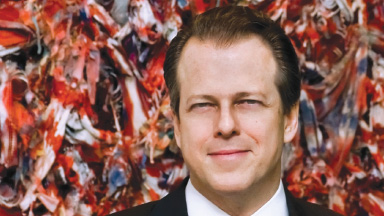 Dr. Maxwell L. Anderson has been appointed the new director of Dallas Museum of Art. Anderson, who is currently the director and CEO of the Indianapolis Museum of Art, succeeds Bonnie Pitman, who retired on June 1. Anderson has served for more than 20 years as a museum director. Since assuming his position in Indianapolis in 2006, Anderson has added over $30 million to the museum’s endowment through gifts and pledges; built a significant international exhibition program; resumed a free general admission policy; more than doubled attendance to reach some 450,000 visitors annually; and led the IMA to become the first museum in the country to achieve the EPA’s Energy Star certification for its environmentally responsible practices. In June 2010, the IMA opened 100 Acres: The Virginia B. Fairbanks Art & Nature Park, one of the largest contemporary art parks in the United States providing a new approach for such museum parks by featuring ongoing site-specific commissions.

“Max is a visionary director who has a proven track-record in translating innovative ideas into successful programs that have attracted audiences and patronage,” stated John R. Eagle, the President of the DMA Board of Trustees. “He brings a strong commitment to scholarship while, at the same time, looking for new ways to strengthen the role that museums play within their communities.” Anderson will assume his role at the DMA on January 9, 2012.

The Gallery at The University of Texas at Arlington is presenting its 13th “Faculty Biennial,” a showcase for recent work created by the Department of Art and Art History faculty. Scheduled every two years, this exhibition presents a sampling of what the art professors accomplish in their creative endeavors outside the classroom. The 2011 exhibition, which runs October 24-November 19, features 27 faculty members working in a wide variety of media including painting, sculpture, ceramics, photography, glass, video, digital imaging and visual communication. In addition, the department’s art historians have examples of recent publications on display.

“The Faculty Biennial XIII is an opportunity for our talented faculty to experiment with new ideas and creatively investigate new modes of expression. This year’s show has a quieter, more contemplative atmosphere than usual; and I think our visitors will enjoy seeing what the faculty are doing,” said gallery curator Benito Huerta.

The work of Brooklyn-based artist Brian Donnelly, who makes his art under the moniker “KAWS,” is the subject of the first Focus exhibition for the 2011–2012 season at the Modern Art Museum of Fort Worth. KAWS’s vast body of work includes graffiti (early in his career), murals, paintings, and sculpture. Following along the continuum of Pop art, his work critiques contemporary consumer culture, blurring the boundaries between it and the art world. Building an artistic language, which includes altered forms of familiar animated characters, such as Mickey Mouse, the Michelin Man, and SpongeBob SquarePants, his cartoonlike hybrids are often depicted in various states of the human condition. Most recognizable in all of his characters are the X-ed out eyes and/or hands. These Xs can be read in several ways. They serve as a simple, globally recognizable, branding device, which can be considered benign enough. Xs are used in some form in almost every field, including math, science, media, language, computers, and video games, and can have a positive or an extreme meaning. When written in a letter, the X symbolizes a kiss. In quick secession, XXX demarcates pornography. And when something is X-ed out, it is removed or negated. Read this way, KAWS’s X-ed out eyes and hands represent the virtual deaths of characters who are humanlike, but nonliving to begin with. The exhibit opens December 11 for a two month run.

The Arts Community Alliance (TACA) has announced Caroline Rose Hunt and Frank Risch as the 2012 Silver Cup Award honorees. Founded in 1976 by civic leader, arts advocate and former mayor Annette Strauss, the TACA Silver Cup is awarded each year to recognize one man and one woman for their outstanding contributions to the arts in Dallas. Hunt and Risch will receive their Silver Cups on February 24, 2012, at the TACA Silver Cup Award Luncheon, to be held at the Hilton Anatole Hotel. Among other things, Hunt has been an active participant in the boards of the National Museum of Women in the Arts, both at the national and state level since its inception, and was the recipient of their Arts Patronage Award in 2003. She has personally provided funding for the capital campaigns of Booker T. Washington High School for the Performing and Visual Arts, the Dallas Children’s Theater (DCT), Parkland Hospital and United Way of Metropolitan Dallas. Risch has been Chairman of the Board of Trustees of the Dallas Theater Center for the past three years, and has served on the Board and Executive Committee of the Dallas Holocaust Museum/Center for Education and Tolerance.

Dallas Independent School District students and their immediate families, as well as district faculty and staff, are being provided a unique opportunity this school year to watch live performances of the Metropolitan Opera in high definition. Dallas ISD is the first school district in Texas, to receive live performances direct from the Metropolitan Opera stage. Performances available during the 2011-2012 school year will include Mozart’s “Don Giovanni,” Charles Gounod’s “Faust,” “The Enchanted Island” (a world premiere with music by Handel, Vivaldi, Rameau and others), and Verdi’s “La Traviata.” Performances will be presented free of charge as part of the Met’s HD Live in Schools program. The transmissions are made possible by the O’Donnell Foundation, the Booker T. Washington High School for the Performing and Visual Arts Advisory Board and Austin Commercial. The Dallas Opera will provide speakers at each performance. The brief presentations will include fun facts about the productions, composers and casts and give the audience a unique perspective on the performances as well as opera in general. “This is a tremendous opportunity for our students to experience the Metropolitan Opera,” said Interim Superintendent of Schools Alan King. “To see the opera in this setting will be truly breathtaking and will hopefully expose students to worlds that they never knew existed.”