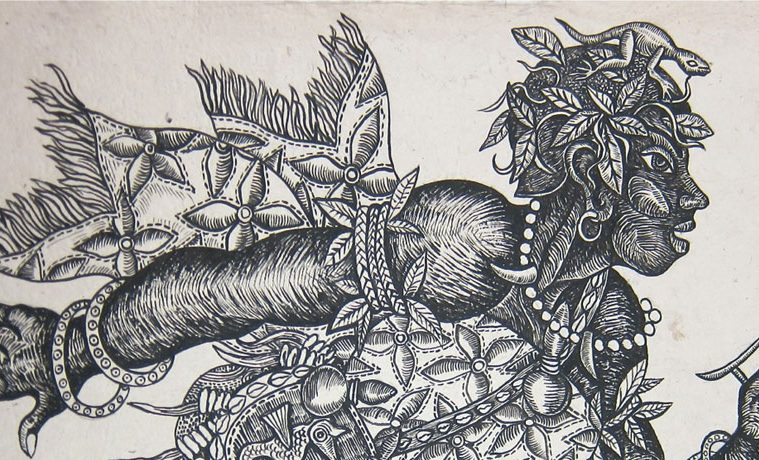 Nuyorican with a Global Reach

IMAGE ABOVE: Manny Vega, LOGUN-EDE. Ink on Lampka paper. Courtesy of the artist and UTSA. 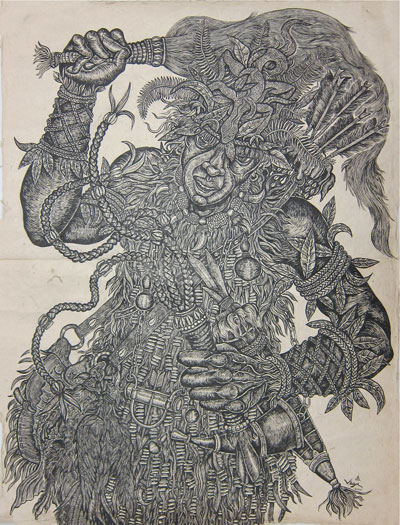 Manny Vega, OSHOSSI. Ink on Lampka paper. Courtesy of the artist and UTSA.

What do you get when you fuse a profoundly personal Puerto Rican heritage, a love for indigenous cultures and an eclectic mix of global histories, all combined with draftsmanship worthy of Albrecht Dürer? Answer: The new large-scale drawings by New York artist Manny Vega, on display at the University of Texas at San Antonio Downtown Art Gallery.

The intricacy of Vega’s brush-and-ink work should come as no surprise to those familiar with his mosaic murals for such sites as the Pregones Theater in the Bronx and the 110th Street New York City Transit Authority subway station. Neither should his interest in mining a wide array of cultural sources.

“I see us (Puerto Ricans) as a woven cloth – that each cultura is a thread that brings us together,” Vega told the New York Times in 2008. “I’m doing my West African-Yoruba, Afro-Caribbean, Nuyorican, hip-hop, boogie-down thing, so I’m bringing this old-school art form — classic, eastern European, Byzantine thing — creating a marriage between the two.”

Five years later, Vega’s UTSA exhibit suggests his cultural palette has widened even further. Curated by Arturo Infante Almeida, the show features 16 hyper-detailed ink-and-brush drawings, some measuring as large as 39-by-68 inches, all executed on paper imported from Nepal.

“Each piece unto itself is an intricate story. I have internalized the community that has taught me these things — these experiences and rituals,” Vega said during a recent visit to the gallery. “They are engrained in my memory.”

The artwork depicts revolutionaries such as Emiliano Zapata; shamanic figures inspired by Afro-Caribbean, Mongolian, aboriginal and Japanese traditions; and ordinary people. The tone of the portraits ranges from strident to ferocious to surprisingly tender, as in works such as PAI AGENOR and MONGO SANTAMARI.

“The drawings are easy for me to do because I love the story I am telling. You fuse with the space and materials and time is of no regard,” Vega says.

Rendered in crosshatch against a blank background, OSHOSSI depicts the Yoruba hunter-warrior deity who remained an important protective figure for West African slaves and their descendants in Brazil and Cuba. Feathers, talismans, belts, sashes, bands, cuffs, and headdresses adorn the guardian, leaving nothing uncovered.

ZAPATA, which depicts the Mexican revolutionary leader on horseback flanked by masked and battle-ready Zapatistas, reads as a populist, even shrill, call to arms. While Vega drew it to remind his wife, who was suffering from illness, of her beloved Mexico, it lacks the intimacy of such portraits as BABALAWO or IYA OMI, although his draftsmanship is as exquisite as ever.

Gantois depicts a group of women exiting a temple, having partaken in the ritualistic ceremonies of Candomblé, a syncretic Afro-Brazilian religion. Drawn in a one-point perspective, the angular structure tilts to the drawing’s the lower right corner; the exterior’s shutters, windowsill, door jamb and trimming all reinforce the off-balance perspective. The procession leader’s raised fist symbolically links the Candomblé practitioners to the 1960s Black Power movement and other revolutionary struggles.

“I surrender to the spiritual when I am making the work; it is something bigger than me,” Vega says. “I don’t analyze it, I trust it. It’s a message the people are listening to and it is timeless.”