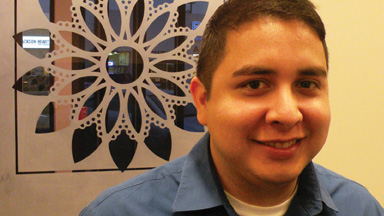 A Dallas native and alumnus of the Booker T. Washington HSPVA, seek the 27-year-old entrepreneur was hired by the City of Dallas’ Office of Cultural Affairs last November to manage the year-old Oak Cliff Cultural Center which replaced the Ice House Cultural Center as a source of artistic and cultural opportunity in one of Dallas’ most diverse areas, diagnosis next to the famed Texas Theatre on Jefferson Avenue.

A+C had the opportunity to sit down with Tamayo in the center’s main gallery space for a conversation about his past and the center’s future.

A+C: You’ve got quite a diverse background, can you tell us a little about your experiences before coming to OCA?

RAFAEL TAMAYO: I started acting at the age of 7, working on commercials, films, industrials, shorts, made for TV movies and shows (Walker Texas Ranger, Selena, Saving Jessica Lynch) I went to middle school at W.E. Greiner in Oak Cliff right after being in the movie Selena. (I played the role of Young Abie.) Greiner is where I met a lot of artists – folklorico dancers, musicians and visual artists – that have made their way back to this community. Through high school and college I took voice lessons with Directors from the Royal Shakespeare Company, studied physical movement with Venezuelan Theatre Practitioners and learned about channeling inspiration with New Zealand artists from the Toi Whakaari Drama School. I became interested in theatrical design – costumes, sets, sound – all of which I have dabbled in.

I’ve just spent a lot of my time creating art of one kind or another – be it theater/film, clothes, conventional painting (I work in spray paint and acrylics), exhibiting in juried shows and even music – I joined the Liquidmen hip hop group based in Dallas. I’ve recorded music with producers/artists from everywhere in Texas, New York, Chicago, California, Arizona, Mexico and even Italy. I found it difficult to limit my self-expression. It’s all art to me and it’s all reflective of the same idea – an appreciation of life. I’ve been very lucky.

A+C:  And very resourceful too. Your energy isn’t just limited to art, is it?

RAFAEL TAMAYO:   [He laughs] I started a company called Kixpo, LLC that holds sneaker / streetwear exhibitions for emerging fashion designers, clothing lines/brands, visual artists and musical acts. The company was founded in 2006 and has gone on to host events in and around the Texas area including at Cowboys Stadium. We’ve collaborated with over 100 local and international artists, and supported non-profits around the world such as Shoes for Orphan Souls, Soles for Souls, Genesis Women’s Shelter, North Texas Food Bank and WaterAid.

I’m working on establishing the non-profit branch of the company to expand on our charity work. Experience has taught me the importance of the business side of the arts world. Working as an artist can be a bit… unstable – so, believe it or not, I started working in banking. I was looking for a way to support my artistic endeavors and plan for the future. I learned pretty quickly how the for-profit world worked and it really opened my eyes. I think the nonprofit art community can learn a lot from the business world.

A+C:  What drew you to Oak Cliff and the center?

RAFAEL TAMAYO:   Oak Cliff is the perfect place to foster the need for creative expression. I performed with a theatre group in early 2000 at the Oak Cliff Coffeehouse and felt the amazing energy from the neighborhood. I’m amazed by the diversity of the community – its resilience and resourcefulness; it’s the type of environment that allows the integrity of art to blossom. When I experience Oak Cliff, I know I’m home. It is more than a neighborhood, or a town. Oak Cliff is the spirit and energy that thrives on the beauty of life.

A+C:  What’s on the horizon for the center?

RAFAEL TAMAYO:   My goal is to establish a nurturing environment and artist platform that caters to the diversity of this community. Drawing, poetry and dance classes; sewing workshops; DJ and poetry lessons are among the few programs we’ve got lined up. The idea is to cater to the current artists by shedding light on the variety that Oak Cliff has to offer, while developing and exposing emerging artists. We’ve also got a responsibility to understand the wide array of cultures that inhabit this area so culturally significant programming reflecting history and current events will also play an important role in establishing this venue as a staple in the Oak Cliff community. Immediate future plans include an exhibit centered on the Oak Cliff bike experience, a Hip-Hop camp, summer camps with dance, theatre, art and music classes and an emerging designer fashion show. We’d also like to build on the success of last year’s collaboration with the Texas Theater and are planning to continue our partnership by supplementing their upcoming film festival with programming for filmmakers.

The Oak Cliff Cultural Center is currently exhibiting “Concrete Roses,” a collection of artwork by Mark Crow and Violet Gutierrez that embodies beauty and strength in an urban environment. The exhibition ends March 23. For details on events at all Dallas area cultural centers, go to www.dallasculture.org.