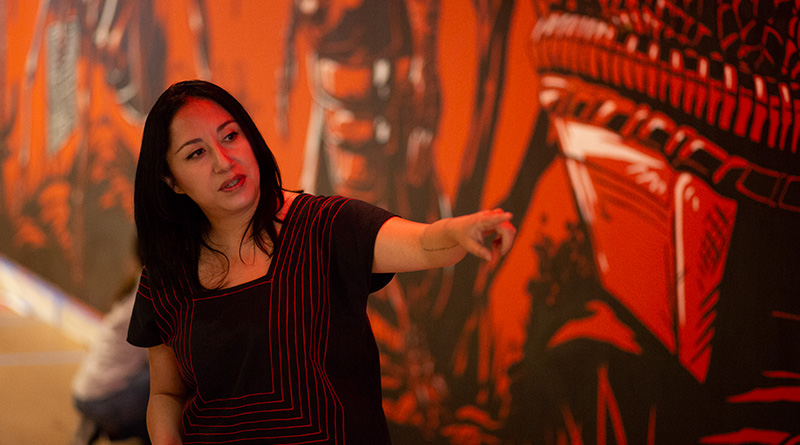 An armadillo and a pair of prairie dogs wearing bulletproof vests. A tortoise strapped with an immigrant’s backpack. An ant wielding a microchip. Oil gushing from a disintegrating derrick, spewing menacing bats and dripping down the entire scene. Welcome to Minerva Cuevas’ dystopian desert landscape, now covering a long wall along the Dallas Museum of Art’s main concourse.

The temporary work, Fine Lands, is the latest in the museum’s annual mural project, painted in the Pop style of graphic novels by the Mexican conceptual artist and an array of assistants. “Minerva is a very socially engaged artist,” says Anna Katherine Brodbeck associate curator of contemporary art, who selected Cuevas to create the mural after seeing a video piece in Paris and learning that she was a visiting artist at Southern Methodist University. “She’s making a lot of references, but what they have in common is the impact of late capitalism, of the global economy, on people and the environment. These were issues that are near and dear to my heart.”

Brodbeck wrote her dissertation on Brazilian political artists of the 1960s and 1970s, so she recognized Cuevas’ concerns about labor and immigration issues in Texas, Mexico and the border they share. Cuevas works in all mediums, from painting to photography to sculpture-based installations, sometimes using non-traditional materials like chocolate, so she’s accustomed to making art that comes and goes. “It puts less pressure and gives you freedom in some ways. It can embolden you,” the curator explains in an interview in front of Fine Lands, which has been up since mid-May and is on display through Sept. 2. “Rather than saying something more universalized, you can say something specific about a time and a place. You are not responsible for speaking to the entirety of human history.”

This is not Cuevas’ first mural commission or her first politically charged work. “I think at the heart of all her projects is the enormous amount of research she does into an idea before starting,” Brodbeck says. In this case, Cuevas took inspiration from what she knew about the effects of globalization in Mexico, along with the realities of corporate labor practices in the U.S., the controversy over illegal immigration and what she learned about Texas culture during her time in Dallas. One section of the mural depicts an airborne, circling State Fair or Six Flags-type swing ride that has been mounted by a giant bug and is being threatened by a horde of bats. In addition to terror, there’s a satirical edge.

“She’s borrowing in this particular work from the language of graphic novels,” Brodbeck says. “I had one idea about what that meant, but she also brought up that political propaganda also uses a similar language. She’s interested in nuances and shades of meaning. She’s interested, like a lot of artists, in the gray areas.” Rendered only in black and a deep, earthy burnt orange, the piece took three weeks to complete. Cuevas started with drawings that were converted into graphic digital images and then projected onto the museum wall near the main entrance. Painting with rollers and brushes of various sizes was conducted in the open, so visitors could watch the process. “A lot of kids were interested,” Brodbeck says. “You don’t always get to see an artist in the process of creation.”

Though we tend to look at murals from left to right, at the end of Fine Lands there’s an oil derrick that appears to be the beginning of all the trouble. It’s the most abstract section, seeming to depict hybrids between machines and animals, including a robo-ant or mechanical praying mantis crawling across the landscape and a ghostly scarecrow hovering overhead. Everything from the grass to the cacti to the oversized insects comes to a sharp point. Crosshairs sprinkled throughout the mural imply that the landscape is a target.

“Overall, it’s kind of menacing, but it makes you consider things on a micro-level,” Brodbeck says. “She’s taking these macro ideas about global economics, but we’re looking at a scene that affects the tiniest things, things that are less considered. It reads like a story, but an ambiguous one. It’s open to many interpretations.”

Fine Lands fits into the long history of mural painting in Mexico, where the idea of making art on a large scale for the public took hold. Cuevas also taps the stylized, politicized Pop art of the 1960s and’ 70s in Latin America, Europe and Asia that Brodbeck has studied. “Artists were using Pop imagery not to display the products of consumer culture,” she says. “but to depict more politically laden material because of the situation in their countries.” Cuevas is after a similar effect, commenting on a time of increasing concern about the effects of global economic imperatives on people and nature.