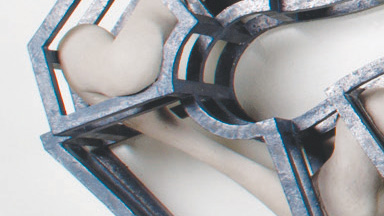 Spindles and webs of organic shapes span the hallway like an alien garland, interlinking peculiar bulbous nodes. Hard ceramic cages squinch and shape the interlinked tumorous forms. The bone-like lattices that festoon the hallways of the Artists Gallery at the Houston Center for Contemporary Craft comprise Systemic Expansion, the latest installation from David Katz, a sculptor and installation artist who works primarily with ceramics.

Much of the look of this exhibition is indebted to cellular and microscopic organic influences, with portions looking like microscopic bone structures, plant cells, or the twisting reminiscence of the double helix. However, an industrial component is pervasive as well, in that the suspended portions appear as strange trellises, bridges, or cabling while the rectilinear forms bring an architectural intervention.

Further, the larger, lumpier forms appear as large roots or tumors that grow around the rectangular shapes much in the way a vine may latch to a support, or when a root encounters an obstacle. It’s as if a gardener or architect previously trained the organic shape to the mold of the boxes, but through their absence, we now witness some sort of entropic reclamation.

Katz produces these installations by creating ceramic hard-lined prism forms that are interspersed along the walls of an installation space. The artist suspends wires between the rigid forms which makes an armature to hold the unfired clay. Katz applies clay around his armature while still pliant, and sculpts it into recognizable biomorphic forms.

While the shapes are too abstract to ascribe to any specific forms exclusively, the relationship between Katz’s organic and rigid forms prompts the mind to relate to the outside world.

Indeed, Katz directs us to contemplate man’s desire to fabricate structure to control or influence the natural, and how this superficial structure may create dependencies in the future.  Readily the mind ponders how arbitrary any infrastructure really is, from physical roadways or urban planning to the internet or the social mores that dictate how we interact.