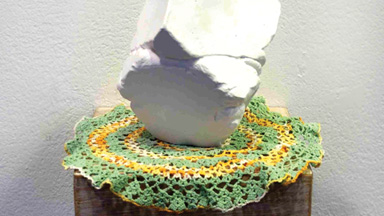 Nick Barbee’s show at Plush Gallery, cialis Proclamation, questions how things stand. His work, mainly minimal cement and plaster sculptures, does this by exploring and playing upon geometry and the notion of ground, both theoretical and material.

In this multimedia exhibition of two- and three-dimensional works, Barbee’s sculptures seem to say the most. They consist mainly of polyhedra and severed feet socked in assorted colors. These two types of objects connect and contrast the two senses of ground — theoretical and material — as well as the notion of standing. His Enneadecahedron and Chevron perfectly manifests these notions.

The first of this two-part work, Enneadecahedron, is a small and delicate basswood structure that reminds you of a thoughtful model, of a careful experiment. At some point a science teacher probably had you make a simpler version of it. The other, Chevron, made of waxed cement, is a minimal, smooth and ashen-surfaced polyhedron with ten sides. Again, you will think you have handled an object like this before. In many ways both pieces appear somewhat modest, like everyday artifacts made of wood or stone that once lived in this or that drawer. But, when taken with the feet across the way — each entitled, “Foot” — they elicit more.

The ten-sided Chevron (a pentagonal trapezohedron) has corresponding faces and edges so that it can rest on any face. Enneadecahedron, however, is a 19-faced polyhedron that can only stand on one face (thus it is “monostatic,” or single-standing). This means that for all its dimension and surfaces it can only stand one way. Feet bespeak the same. For all the ways in which humans experience the world and manifest their own being, it takes feet to stand, as well as some foundation or ground upon which to stand. And what does this draw out?

This prompts you to ask, what is geometry grounded on? Concurrently, what do humans need to stand? Both of these questions are as much practical as theoretical. Geometry and geometric shapes need mathematical grounding, just as feet and objects need material grounding, like some patch of earth or some square of gallery concrete. In this way both a foot and a polyhedron signal standing and foundation. They remind us simultaneously of the possible sublimity found in shapes and numbers, as well as the necessity and practicality of something upon which to stand. This seems to be Barbee’s twofold proclamation.

—ANDY AMATO
Andy Amato is an artist, writer and teacher