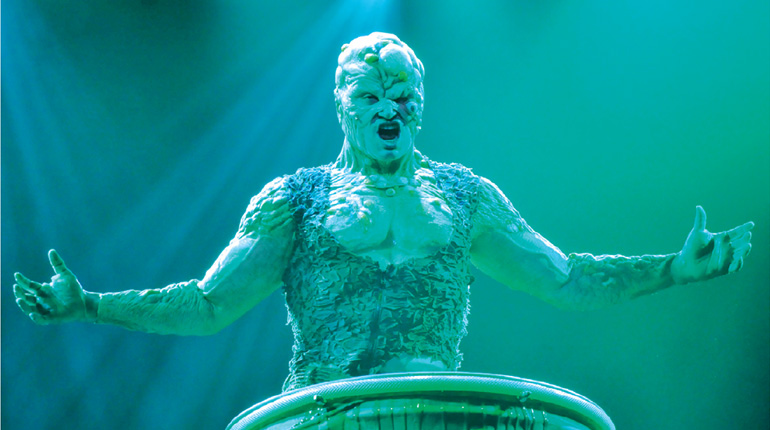 Musical theater has, as of late, taken some strange turns. Movies beget music

als that beget musical movies, but none, thus far, have been as surprising as “The Toxic Avenger,” based on the cult classic film of the same title, which received its Houston premiere at the Alley Theatre.

The musical takes place in the dregs of the fictional Tromaville, New Jersey, where toxic dumping runs rampant. The play’s hero, Melvin Ferd the Third, is your typical wimp, who vows to his beloved blind librarian to “clean up this town.”

When he gets dumped into a barrel of toxic goo and transforms into Toxy, a mutant with superhuman strength and rippling abs, the play is off and running. At its finest moments, “The Toxic Avenger” was laugh-out-loud funny, sprinkled with a few choice, surreal scenes and an abundance of pop culture references (although, surprisingly not one “Jersey Shore” joke).

Despite a small cast of five, a plethora of different characters appeared and disappeared through extraordinarily rapid costume changes.

Nancy Opel, the actress who played both Melvin’s mother, as well as Tromaville’s nefarious mayor, had an outstanding, over-the-top scene in which both characters appeared on stage simultaneously.

The main character, Toxy, portrayed by Tony Nominated/”American Idol” famed Constantine Maroulis, was the weakest link, by far. His utter lack of self confidence, despite his new found ability to tear the limbs off of his adversaries, felt forced, and his heart-wrenching musical solos fell flat.

On a whole, “The Toxic Avenger” was entertaining, but perhaps not quite of the same caliber as its comedy-musical contemporaries.

The music was catchy and upbeat yet unmemorable. This production has its sights set on Broadway; it will surely make it, once it works out a few of the kinks.

— ABBY KOENIG
Abby Koenig is a Mass Communication’s professor at Houston Community College, a creative writer and playwright. She writes about all things art and culture for the Houston Press’ Art Attack blog. www.blogs.houstonpress.com/artattack