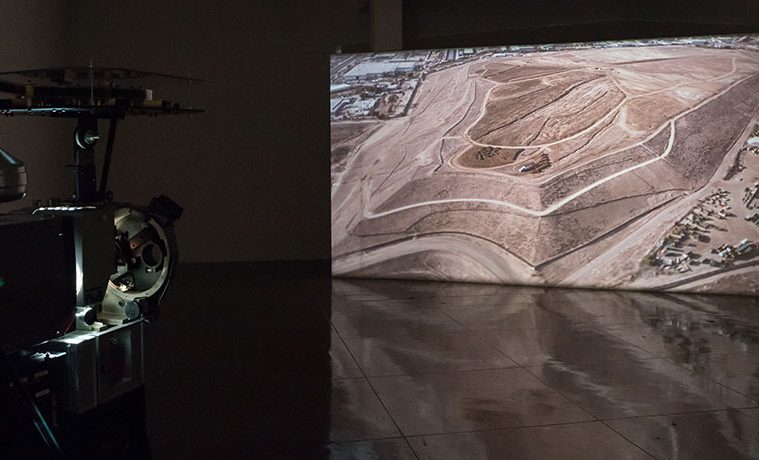 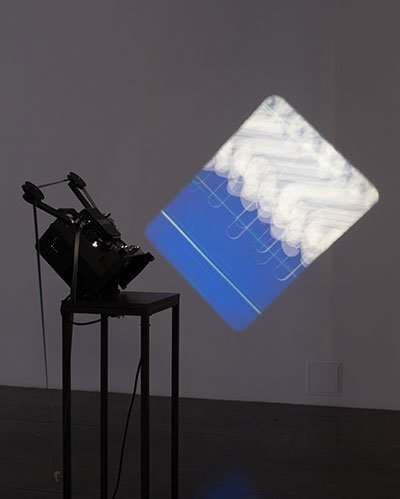 Entering the Berlin-based artist Rosa Barba’s contribution to the Spring International Artist-in-Residence program at Artpace, the viewer is immediately confronted by a multitude of sounds.

Two film projectors whirl and spin, front and center in the gallery, while a computer-generated voice attempts to boom over them, reciting a text written by the artist.  The first work, Definition of Landfills (2014), is like many of Barba’s past works—sculptural and cinematic, encompassing the 8mm projector as well as the projected image and narration. In it, Barba films a tiered landscape from a helicopter. These land tiers, surrounded by mountains, immediately elicit a love for topography, allowing the viewer to examine the image on a purely aesthetic basis. Barba’s seemingly anachronistic insistence on projecting film in her installations instead of converting it to video or digital media for projection stems from her belief that the light in film is more painterly. In the presence of her Artpace installations, it is nearly impossible to disagree.

Moving away from the pure aesthetic of the image, and from the nostalgia of celluloid film, one turns to the narrative recited by a robotic voice. Barba’s text informs the viewer of the place she is presenting. This is not just organic terrain she is filming; Her own written narrative starts with, “As one familiar with the world landfill might assume landfill is a form of sculpture comprised of found objects arranged in such a way that they create a piece.” Part found object, part ready-made? Satirically equating landfill with a found object, Barba explores how individual meaning can be projected onto the landscape. With her cinematic view of this gargantuan area of the landfill, filled with organic and man-made objects unseen to the viewer’s eye, Barba continues her narrative, touching upon how archeologists use the word to refer to a collection of artifacts, and how landfills can be self-described as barrows, rammed earthworks, or earthen pyramids. Ultimately, Barba explores the effects of time and penetration on the terrain—simultaneously documenting the contemporary American landscape while commenting on our continued impact.

Along with the film works, Barba created two prints installed just outside the gallery entrance. The prints are the beginning of a series started in Marfa and now San Antonio, where Barba takes rubbings of local train tracks, reinforcing the marks left by passing trains. As the beginning of an archive (she plans to continue this across the United States), these prints poetically and subtly speak to Barba’s interest in remnants left on the landscape.

Time and history and their continued impact on contemporary art are recurring themes in this spring’s residency exhibitions, which were curated by Rita Gonzalez, associate curator of contemporary art at the Los Angeles County Museum of Art. Barba, Liz Glynn and Jessica Mallios each explore these themes consistently in their individual practices, allowing these solo shows a stronger connection that one sometimes finds within these curated residency exhibitions.