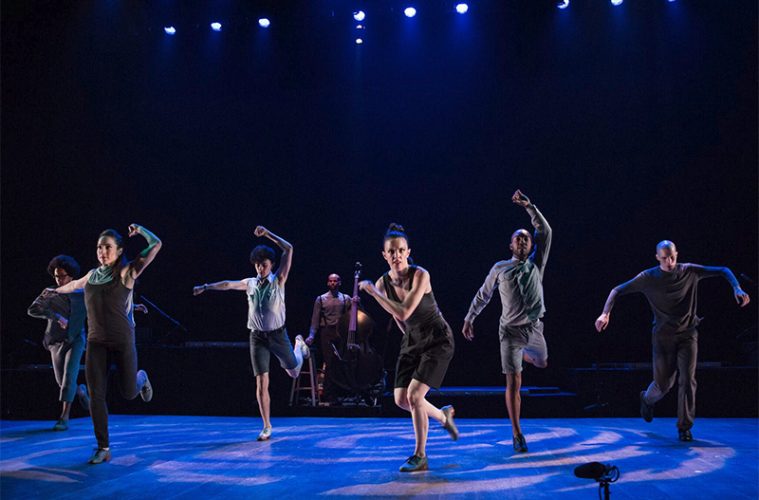 Michelle Dorrance’s no-holds-barred approach to tap dancing has endeared her to audiences and presenters throughout her career as a solo artist. While this enigmatic performer is captivating on the stage, it is her choreography that has brought Dorrance into the spotlight in recent years. Since founding her company, Dorrance Dance, her award winning choreography has been hailed as experimental and groundbreaking, particularly for her approach to storytelling through rhythm and movement. Exemplary of Dorrance’s choreographic innovations is ETM: Double Down, an evening-length concert brimming with technological wizardry, inventive music, and exceptional dancing. The show soon hits Texas on a three-city tour. 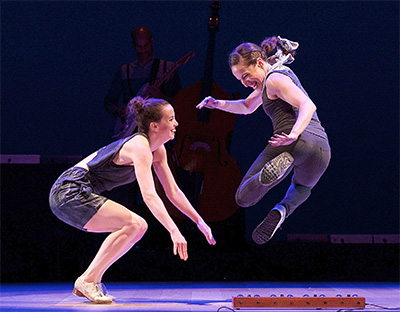 Michelle Dorrance and Ephrat Asherie in ETM: Double Down. Photo by Elliott Franks.

While Dorrance’s name is on the company, she is quick to point out that she does not work alone. In fact, upon being named a MacArthur Fellow in 2015, Dorrance commented, “Here’s the thing—I can’t accept this award as an individual.” This sort of self-effacing line is typical of Dorrance, but the principle of collaboration it points to permeates her work.

Dorrance’s creative vision includes many genres of dance and multiple styles of music, but since tap dance remains her specialty, she works with other artists to highlight their particular expertise. Take, for example, her inclusion of break dancing in much of her choreography for the stage, which illuminates connections between breaking and tap dancing. Working with her friend, Israeli-born break/hip-hop/house dancer Ephrat “Bounce” Asherie, Dorrance states, “We’ve really collaborated to have integrity in both of our forms in the things that we do.” When Dorrance and Asherie dance side-by-side, as they do in ETM, they enliven the relationship between their dance forms.

As a tap dancer who values the musical attributes of the form, Dorrance is particularly sensitive to the emotional and expressive quality of music. She often works with musicians to create musical arrangements for her choreography, as she did for a recent commission for American Ballet Theatre. Dorrance collaborated with musicians Allison Miller and Carmen Staaf to arrange a selection of Duke Ellington tunes. The three of them share attention toward what Dorrance describes as “the way certain chord changes and certain progressions of major or minor scales and melodies take you somewhere emotionally, or even intellectually.” In order to complement her choreography, Dorrance states, “I want certain specific elements inside of the voicing or orchestration of certain sections of the music.” To achieve music that fits her vision, Dorrance works closely with musicians she trusts. 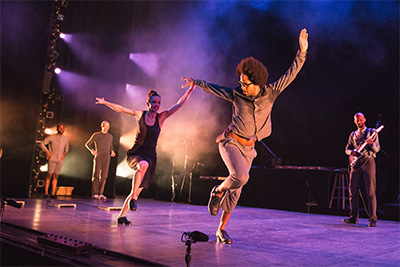 Dorrance Dance in ETM: Double Down. Photo by Matthew Murphy.

Even in her pursuits as a teacher and mentor to young tap dancers, Dorrance insists on including multiple perspectives. In 2019, Dorrance will co-direct the tap program at the School at Jacob’s Pillow with fellow tap dancer Dormeshia Sumbry-Edwards. As they have in the past, the two will gather tap dance luminaries for the program’s faculty, in order to introduce students to the stylistic, musical, and aesthetic variety of tap dance today.

For ETM: Double Down, Dorrance collaborated with her long-time friend Nicholas Van Young, a Texas native, to create a 21st century tap dance concert in which the performers create the sound score as they dance. ETM, an acronym for “electronic tap music,” is a play on EDM, which stands for “electronic dance music.” Before there was ETM: Double Down, which premiered in 2016, there was ETM: The Initial Approach, which the company unveiled in 2014. And before that, there was Van Young, experimenting with the technology as a soloist. On his own, Van Young engaged contact microphones, guitar pedals and effects, and looping technologies, which he mixed and mastered through a software program called Ableton. Eventually, he fitted wooden dance boards with contact microphones that, when tapped upon, functioned like electronic drum pads, which could be programmed with any number of sounds—car horns, tuned notes, wind chimes, and anything else imaginable. He connected the boards to the software, and with his “compositional tap instrument,” Van Young was like a one-man band. 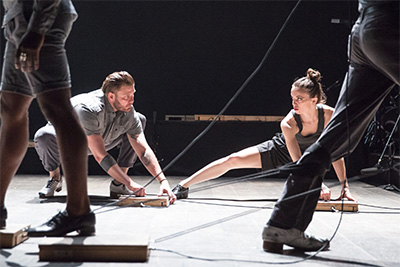 Dorrance approached Van Young about expanding the technology from his solo explorations to a set for a company of dancers, and ETM was born. When Dorrance and Van Young talk about their process together, as they did in a post-performance discussion at Jacob’s Pillow Dance Festival in 2016, it’s clear that they have a lot of fun. As Dorrance puts it, “play is an important part of any creative process.”

The two met as teenagers at the St. Louis Tap Festival, and they have been friends ever since. Dorrance attended the festival annually with her mentor Gene Medler and his North Carolina Youth Tap Ensemble. Van Young, who trained with Acia Gray and the Austin-based Tapestry Dance Company, similarly traveled the tap festival circuit, which enabled dancers like him to dance with then-living legends like Jimmy Slyde, Buster Brown, and “Peg Leg” Bates. Dorrance and Van Young continued to connect at festivals during their teenage years and were eventually roommates in New York City. Recognizing Van Young’s importance as a collaborator for Dorrance Dance, he was recently named the company’s Associate Artistic Director.

In the first iteration, ETM: The Initial Approach, Dorrance and Van Young essentially sought to discover what they could do with the “electronic tap music” technology for an ensemble of performers. Dorrance characterizes the creative development of each iteration of ETM as a “troubleshooting collaborative process.” As Dorrance dreamed up technological challenges, she would ask Van Young questions like, “Could we trigger this set with a Wii-mote?” And then Van Young would figure out how to make it happen. He describes Dorrance’s creative process as both brimming with ideas and intensely focused stating, “she vibrates on a very, very high level and throws tons of energy and ideas and excitement into the room, and that gets me excited.”

The dancers and musicians of Dorrance Dance also played an important role in the development of ETM. By expanding the technology for an ensemble, Van Young states, “we had a platform to create a playground for sonic capabilities with a lot of very, very accomplished young tap dancers who were eager to experiment.” Dorrance gives an example of assigning a dancer six notes to play and then asking a series of questions: “how do you want to trigger this melody? Can you jump from your right foot to your left foot? Do you want to stay on the right foot and trigger this other board with a long reach over there?” Working together, the musical and choreographic composition of ETM developed through shared group process.

In ETM: Double Down, once the company had established the techniques for engaging the technology, Dorrance and Van Young were able to make much more specific artistic choices. ETM: Double Down is packed with tap dancing and music, which is to be expected of a tap dance performance. More surprising are the emotional elements that emerge, which seems to be a specialty Dorrance brings to the stage. On Dorrance’s choreographic expertise, Van Young states, “Michelle is an unbelievable storyteller within dance, as a choreographer, and she has a real ability to connect emotionally with the dancers, which end up allowing the piece to connect emotionally with the audience.”

Connecting with audiences in all sorts of venues is vital to the continued appreciation for tap dance as an art form. Dorrance is one among many who are, as she says, “trying to expose as many people as they can to the powerful possibilities of this art form.” With ETM: Double Down, Texans are sure to encounter tap dance as you have never experienced it before.