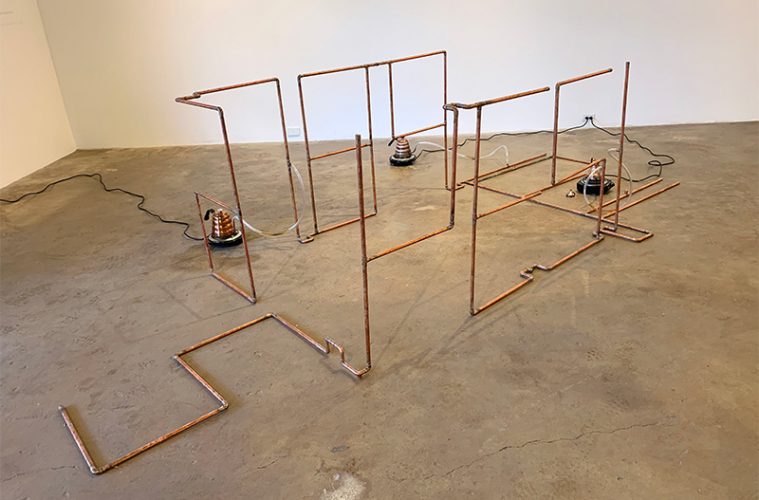 Cast your brain on the ocean of pop culture references for “perpetual worker” and you may come up with workaholic TV dads, the Energizer Bunny, or even Sisyphus, doomed to an eternity of useless boulder-pushing. What might not occur is the kind of perpetual work embodied by artist Kristen Cochran, in part because she makes it look like fun. It probably helps that while tackling subjects as gargantuan as labor, the body and identity, her sense of humor remains delightfully intact. “I don’t have to do it,” she says of being an artist, “I’m not a robot.” But the roles of artist and educator take primacy in Cochran’s sense of identity in such a way that her eyes are forever open, ready to receive potential fodder for her work. Inspiration can strike anywhere from an artisanal bakery to a ready-to-be-demolished defunct studio. 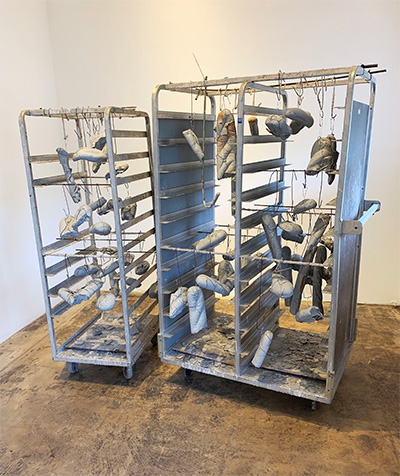 For a recent exhibit at Lawndale, Cochran’s work was paired with Houston favorites Katy Heinlein and Marcelyn McNeil, two other artists whose work has a marvelous (perhaps even revolutionary) propositional quality. Cochran’s seam drawings excise the bodies of button-down work shirts, whether “blue collar, white collar, or McDonald’s uniform,” leaving the skeletal remains of a once-functional garment splayed on a gallery wall. But the artist is hesitant to ascribe much of the work’s meaning to larger political implications. “If people corner me and ask me about Marxism…” she begins, and then trails in another direction, “It’s not heavily, politically charged work.” More than anything, what Cochran seems to have is a sense of perspective, and that perspective is close-up. A specific artwork can certainly reference the broader strokes of our current situation—either politically, environmentally, or culturally—but the focus remains on people. “It’s more toward human experience,” she explains. 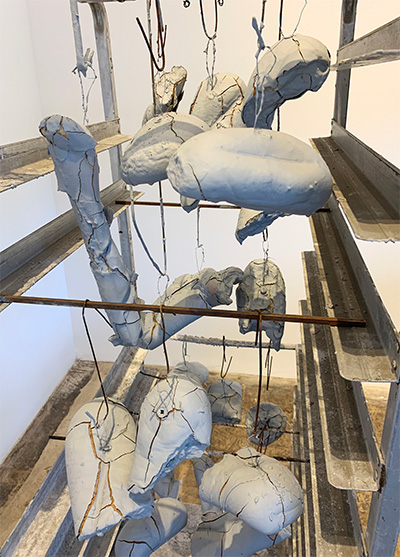 Her intimate focus is deeply related to the sense of touch. Cochran values the kind of wear-marks and grooves that result only through the formula of repeated action plus time. The seam drawings began with studio aprons, “heavily patina-ed” with the marks of “students trying to make a thing.” She cast sections of drawing carts at UTD’s art barn where she had a studio for almost two years, in part “to preserve something” of what was slated for demolition. “They had the fingerprints of students.” And on her website, you can watch a video piece titled Proper Kneading, in which a baker “tenderly” handles dough, “his flour-covered self” folding and unfolding the soft, almost fleshy material in a hypnotic ritual of making.

For Material Intensions, which was Cochran’s three-person exhibition at Dallas’ brand new Ex Ovo project space (located on pitch-perfect Fabrication Street), the artist began with one of the most basic tactile objects: bread. Dipped in clay slip, the bread became a “crust factory of failed attempts.” The “baguettes, rolls, and broken bits of bread” changed, cracking and molding over time, but as Cochran explained, “I don’t want a safe show.” All three artists involved had “very active, hands on” ways of working. It’s “different than art fair stuff,” she laughs, saying of the bread works, they were just “too weird and good. I had to do this!” At the same time, she remains pragmatic about the economic realities of both artists and commercial art spaces. “She (ex ovo organizer Allison Klion) can’t just sell moldy objects,” the artist admits with a laugh. Ex ovo is actively seeking to draw in collectors of all kinds. “She desires to have multiple price points.” 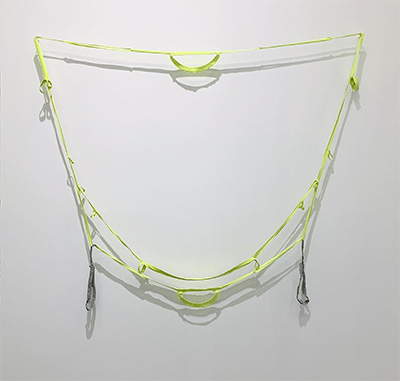 It was in part economics that brought Kristen Cochran to Dallas from the Pacific Northwest in the first place, for the graduate program at SMU. “Short story,” she says “a full fellowship is compelling.” Having worked in graphic design and then massage therapy, she took an indirect route to her current professional role. She attributes the very physical nature of her work to these practices, as well as her history as a soccer player and soccer camp counselor. But like any artist worth her salt, the variety of kinds of labor she has done have taught her that art can be made anywhere and from anything. In a very real sense, the world is her oyster. She tries to keep a balance: “I don’t have a rule like ‘you can only thrift or dumpster dive.’ But I’m not rich at all. Economics drives the materials and the processes.” Instead, she continually asks herself, “Who is it for? Is it in the service of others or in the service of ideas?”