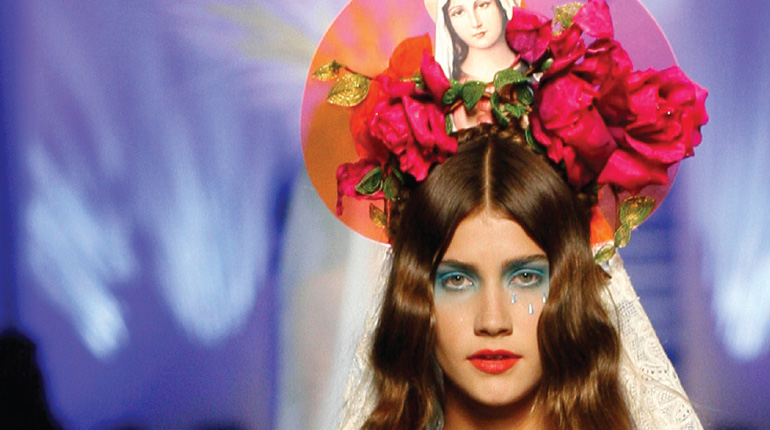 The Art of High Fashion

If there’s one thing Jean Paul Gaultier hates, it’s convention. That’s why the famously dubbed ‘l’enfant terrible’ is a great clothing designer. For 35 years and 150 collections, Gaultier has delighted, shocked, and inspired the world with his imaginative and eccentric creations. Now his creative designs will be judged from the cool white walls of art museums with an international exhibit that makes a Texas stop at Dallas Museum of Art beginning November 13.

“The Fashion World of Jean Paul Gaultier: From the Sidewalk to the Catwalk,” the first exhibition ever devoted to the celebrated French couturier, and the DMA is the first of two U.S. venues to host this critically-acclaimed international exhibition conceived, produced, and organized by the Montreal Museum of Fine Arts.

The exhibition also marks the first time that the DMA will present an exhibition dedicated to exploring the art of contemporary fashion.

Gaultier is indisputably one of the most important fashion designers of recent decades. Very early on, his avant-garde fashions reflected an understanding of a multicultural society’s issues and preoccupations, shaking up — with invariable good humor — established societal and aesthetic codes. More of a contemporary installation than a retrospective, this major exhibition — which the couturier considers to be his biggest show ever — features more than 130 ensembles for women and men spanning over 35 years from the designer’s couture and ready-to-wear collections, along with their accessories and numerous archival documents.

According to Olivier Meslay, the DMA’s Interim Director as well as its Senior Curator of European and American Art and The Barbara Thomas Lemmon Curator of European Art, “Jean Paul Gaultier’s couture fashions are bold and unapologetic, and intuitively reflect the cultural moods of a global society. His designs inspire, influence, and bring the very essence of imagination to life. The Fashion World of Jean Paul Gaultier marks the first time the DMA will present an exhibition that explores the art of fashion and we are thrilled to be the first U.S. institution to exhibit the work of one of the most influential designers of our time.”

Gaultier never received formal training as a designer. Instead, he started sending sketches to famous couture stylists at an early age. Pierre Cardin was impressed by his talent and hired him as an assistant in 1970. Afterwards he worked with Jacques Esterel in 1971 and Jean Patou later that year, then returning to manage the Pierre Cardin boutique in Manila for a year in 1974. His first individual collection was released in 1976 and his characteristic irreverent style dates from 1981.

Keenly interested in all the world’s cultures and countercultures, Gaultier proclaims the right to be different by conceiving a new kind of fashion in both the way it is made and worn. Through twists, transformations, transgressions, and reinterpretations of established fashion codes, he erases the boundaries between both cultures and sexes. Gaultier caused shock by using unconventional models for his exhibitions, like older men and full-figured women, pierced and heavily tattooed models, and by playing with traditional gender roles in the shows. This earned him both criticism and enormous popularity.

According to Kevin W. Tucker, The Margot B. Perot Curator of Decorative Arts and Design at the Dallas Museum of Art and the coordinating curator of the Dallas presentation, “Jean Paul Gaultier’s unflinchingly bold designs resonate with his affection for cultural variety and vitality. He has effectively combined couture, art, and popular culture into his own distinctive aesthetic, which is at once personal and yet reflective of the world around us.”

Placed throughout the galleries, 30 animated, talking mannequins, including one of Gaultier, add an extra dimension to the lively atmosphere by surprising visitors with the lifelike presence and spontaneous commentary.

“I wanted to create an exhibition on Jean Paul Gaultier more than any other couturier because of his great humanity,” explained Nathalie Bondil, Director and Chief Curator of the Montreal Museum of Fine Arts. “Beyond the technical virtuosity, an unbridled imagination, and ground-breaking artistic collaborations, Gaultier offers an open-minded vision of society, a crazy, sensitive, and sassy world in which everyone can assert his or her own identity through a unique ‘fusion couture.’”

The exhibit next travels to San Francisco before heading off to European destinations.