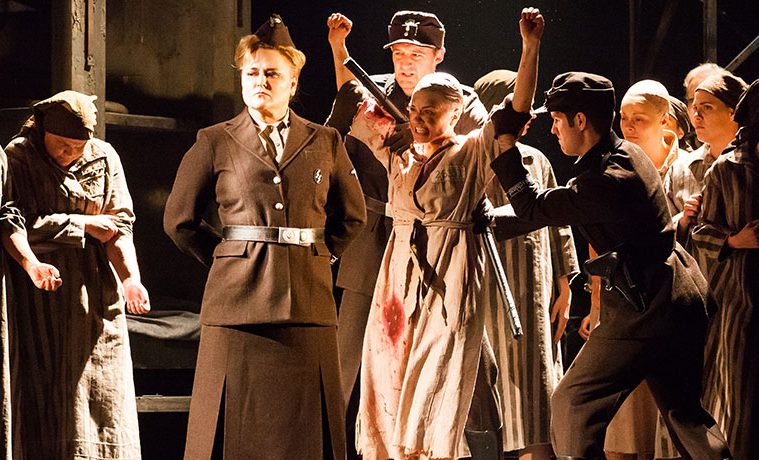 The Art of Remembrance

PATRICK SUMMERS, HGO, AND THE PASSENGER

IMAGE ABOVE: Houston Grand Opera’s production of The Passenger. Photo by Lynn Lane. 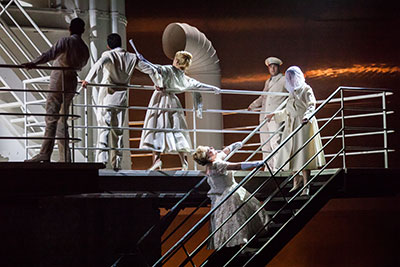 Melody Moore as Marta forces Michelle Breedt as Liese down the stairs to face her past in The Passenger at Houston Grand Opera. Photo by Lynn Lane.

What captured Houston Grand Opera Artistic and Music Director Patrick Summers’ imagination as he sat down to play through the score of a lost opera by Mieczyslaw Weinberg, an obscure composer remembered primarily for symphonies, film, and circus music, was its unrelenting darkness—and its remarkably complex, sophisticated approaches to musical and theatrical storytelling.

“On first hearing, The Passenger is a difficult piece to understand,” he says, as we chat by phone a few days after the U.S. premiere of the work at Houston Grand Opera. “This is a dense piece. It has three distinct sound-worlds, and they correspond to three distinct ways of handling the passage of time onstage. That can be very challenging for audiences to comprehend in a single hearing.” He adds, “We’re accustomed to things that tell us right from the top what they’re going to be. That’s not what this is. The Passenger changes course constantly.” 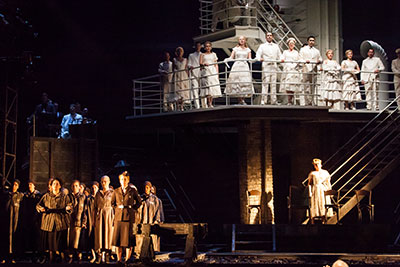 The cast of The Passenger look on from the ocean liner above and Auschwitz camp below in The Passenger at Houston Grand Opera. Photo by Lynn Lane.

The Passenger reveals itself in a series of collisions between characters and events; its territory is the intersection of memory, morality, history, and philosophy. Based on a radio play by Auschwitz survivor Zofia Posmysz, who turned 93 in August 2013,with a libretto by Aleksandr Medvedev, the opera depicts a German couple, Liese and Walter, who are traveling on an ocean liner. Liese, a former SS officer, thinks she recognizes an Auschwitz prisoner she had known to be dead: A woman named Marta. Flashbacks to the camp where she once wielded authority ensue. Liese cannot confirm whether the woman she sees on the boat is truly Marta, the Jewish woman she once manipulated, and The Passenger makes no attempt at closure or reconciliation. Instead, the piece confronts the harsh and complex realities of the murders Liese helped to perpetrate, and her inescapable feelings of guilt.

It is as difficult to situate The Passenger within an established musical or artistic canon as it is to unthread it from the web of Weinberg’s own personal history. There we encounter not only Shostakovich (one of Weinberg’s mentors) and Prokofiev, but Lenin, Stalin, and an obscure border guard who robbed Weinberg of his name and his identity when Weinberg fled Poland on foot after the German invasion in 1939. These encounters were further contextualized by learning about the loss of his entire immediate family in 1943, and the time a scarce decade later, in 1953, when Weinberg himself was briefly imprisoned on charges of “bourgeois Jewish nationalism.” Stalin’s death about a month later, and Weinberg’s  “repatriation” helped him to return to relative safety—and what Summers refers to as “a perfect storm of obscurity”—in Moscow, where he died in 1996. 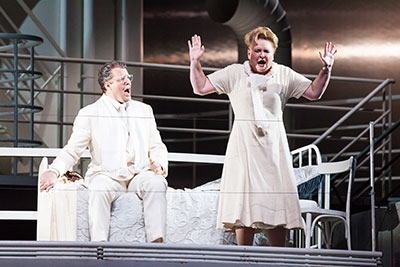 Joseph Kaiser as Walter and Michelle Breedt as Liese in The Passenger at Houston Grand Opera. Photo by Lynn Lane.

Summers says that The Passenger proffers a series of musical events and dramatic climaxes that are distinct and differently-achieved: Some are loud and big and deliver a visceral, body-blow kind of impact; others, like the almost unbearably intimate orchestral epilogue that concludes the piece—a moment completely out of time, yet profoundly tied to the reality of the character of Marta—give The Passenger its authenticity, its immediacy, its impact. “The epilogue, to me, sounds like memory,” says Summers.

And it is those collisions and connections that, for Summers, give The Passenger its unity—and its relevance.

The chorus plays an interesting role in The Passenger, underscored and illuminated by their staging in this production: “In fact, they don’t move very much,” says Summers. In the tradition of ancient Greek drama, the chorus of The Passenger observes, comments, watches—but takes no action, does not intervene. There’s a clear and unmistakable connection to the international reaction to the Holocaust as it unfolded in the 1930s and 40s; and one might infer a connection to events of our own time in Angola, Algeria, Syria, and many other places. 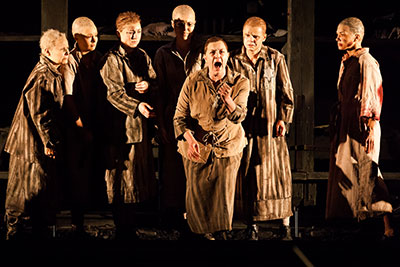 Melody Moore as Marta (center) in The Passenger at Houston Grand Opera. Photo by Lynn Lane.

In The Passenger, the depiction of a few minutes at Auschwitz takes a long time—nearly a third of the opera’s three-hour running-time. “The librettist said that at Auschwitz, one did not wake up in the morning and wonder, ‘How am I going to get through this day?’—Instead, one asked, ‘How am I going to get through the next 15 minutes?’” Summers notes. “Your life was reduced to ever-smaller and slower increments.” He added,  “Treating time in this way in the theater is an extraordinary choice to make: Brilliant and intelligent. But uncomfortable.”

It can be uncomfortable for the performers as well. “There were many tears shed during rehearsal,” Summers relates, “As well as onstage on opening night. This is one of a few pieces of art from that era that is the work of people who were there, who witnessed events like the ones they describe in the opera.” Summers adds, “Our cast, orchestra, and chorus have embraced it with enormous energy and integrity and respect. ”

For Summers, the intersection of all of those ideas—music, theater, memory, morality, history, and philosophy—is a very rare thing to find in a single work of art. So when a piece like The Passenger appears, Summers says, “It’s our artistic and moral responsibility” to engage with it, for audience and the company alike: Because as time passes, our increasing historical distance from the Holocaust might obscure artistic as well as personal connections to its realities.

“The Passenger is an opera about voices that were lost by a voice that nearly was lost,” says Summers. “We have to be the voice; we have to be their voice.”