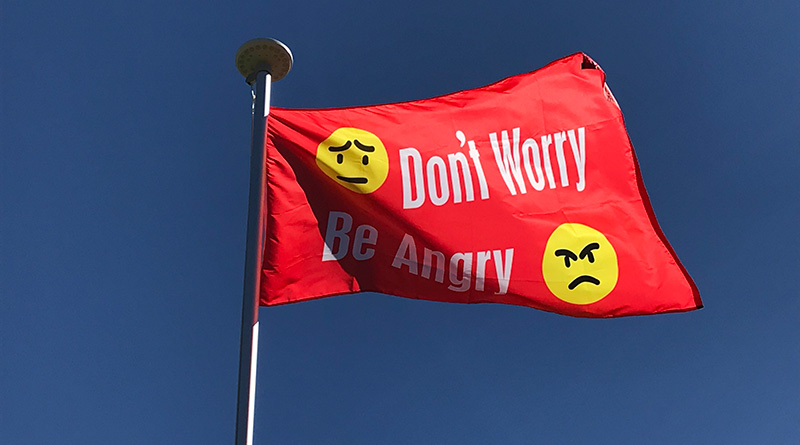 The mystery of Texas State’s Pledges of Allegiance Flag

Imagine a project so powerful that it can quietly subvert hegemonic control with a single image. Then imagine that project is comprised of the voices of 16 artists, all of whom collaborate with a single organization that has the reach to unify multiple institutional voices across the nation. Pledges of Allegiance, organized by New York-based Creative Time, is such a project—a gesture of institutional solidarity using a flag as its mode of communication.

In the current climate of political disenfranchisement and growing ideological tension, Creative Time launched Pledges of Allegiance on Flag Day, June 14, 2017 to “inspire a sense of community among cultural institutions, and begin articulating the urgent response our political moment demands,” as stated on their website. Creative Time invited 16 internationally renown artists such as Pedro Reyes, Tania Bruguera, Josephine Meckseper, and Yoko Ono, among others, to contribute a flag that spoke to the urgent issues important to them. Each flag is then distributed to arts organizations across the country who display the same flag in a public space for up to a month at a time. The gesture is impressive—the raising of each flag on the same day across the country is a provocation for the collective power in support of a symbol and ideology.

Margo Handwerker, director of Texas State University Galleries, was first informed of the Pledges of Allegiance by colleague and faculty member Erina Duganne and contacted Creative Time directly to add Texas State Galleries to the list of host organizations (the project is open to anyone interested in participating and who can meet the requirements of the installation parameters which requires the flag to be outdoors in a public space and not in a gallery). Handwerker, who is connected to the national contemporary art scene, was well aware of Creative Time’s history of provocative public projects. Pledges of Allegiance specifically resonated with her for the multiplicity of the project and its emphasis on solidarity. “Solidarity among arts advocates and cultural institutions is critical right now, when the importance of arts education and arts funding is being challenged,” she says.

Texas State University is an ethnically and economically diverse institution within a small city of an equally diverse community. According to Handwerker, “No one flag symbolizes every voice, but together in their multitude, and brought together as one project, we begin to see the many points of view.” She realized the potential for each flag to resonate individually with the student population, offering a range of artistic responses reflective of the current political climate.

British artist Jeremy Deller’s flag, Don’t Worry, Be Angry, is the fourth to fly at Texas State Galleries in San Marcos—and the only participating organization in the entire state of Texas at the time of writing (at the time of publication seven flags will have flown there). Its red background and bold white letters stating Don’t Worry, Be Angry is an overt call to action flanked by two emoticons, one bearing the expression of worry, and the other a blatant face of anger to further emphasize the flag’s urgency.

As with any major university, the Texas State Galleries sought approval to participate in the project, a process that was expedited by going directly to the University president. Handwerker and Michael Niblett, chair of the Department of Art and Design, proposed installing a temporary flagpole that had minimal impact to the grounds, and could thwart both theft and vandalism. The resulting flagpole stands 20 feet tall, and requires Marino to use a 12 ft. ladder to raise and remove each flag.

That afternoon, associate director Rebecca Marino discovered the flag was missing from its pole in front of the Joan Cole Mitte (JCM) building at the corner of West Sessom Drive and North Comanche Street. The disappearance of Deller’s flag came as a shock, but upon further review it was clear that the flag was not removed in haste, but rather carefully taken down, and according to Handwerker, “the flag did not appear to be removed in anger—the empty rope was carefully raised and tied.”

Upon learning of its disappearance, Handwerker followed a series of steps to locate and recover the flag, beginning with calling University Facilities, filing a report with the University Police Department (UPD), and informing Creative Time of the situation, and extended her reach to students and faculty in the department of Art and Design. Those involved initially assumed petty theft, until receiving an email from a professor who recalled seeing UPD remove the flag. Handwerker was referred to an investigator who explained that the University News Service had ordered the flag to be removed. From that point everything moved swiftly afterwards, according to Handwerker, “once we informed them that the installation was indeed approved, both UPD and the individual who made the complaint acknowledged the error and returned the flag.” It was raised again on March 7, one week after its disappearance.

The reactionary response was the assumption that Deller’s flag was overtly defamatory or too politically potent for the university grounds. However, and according to Niblett, the more they prodded about the details of its disappearance, the more convoluted the answers became, further revealing the efficacy of the flag, its mode of installation, and the necessity for advocacy in the arts, and thus reinforcing the intention of Pledges of Allegiance to create solidarity among arts organizations.

From the University perspective, a spokesperson for Texas State was informed of the flag via a complaint by a local journalist in San Marcos. This individual, who declined to be named, was unaware of the project and the existence of the flag and flagpole, which prompted an admittedly over-reactive decision to remove only the flag under the assumption that it was unauthorized by the university. The flagpole, also a part of the piece, remained intact and was not removed, leaving one to reasonably question if it was indeed the issue of authorization or the content of the flag in question that prompted the initial complaint that lead to its removal.

It is clear that the incident was the result of a misunderstanding and miscommunication, both of which are normal occurrences within bureaucratic institutions, especially in universities. Once the error became obvious, the situation was quickly rectified. However, the intent of both the project and the flag itself are examples of why visual arts organizations should present a unified front of solidarity. It is misunderstandings such as these that makes Pledges of Allegiance even more relevant.

It has been made abundantly clear in our society that images can have a major impact on any viewer; however, images can also be read in a myriad of ways. Questioning and deciphering the meaning of images leads to informed decisions rather than reactions. Pledges of Allegiance proved its relevance at Texas State University through the events that transpired, and according to Ali Rigo, spokesperson for Creative Time, the situation offered “a discussion that has been generated around the school and the galleries, which is good.” Indeed, it was a vital learning experience for the university, and an example of the reasons that the arts are important in cultivating an informed society to prevent a climate of overreaction.

Handwerker recognizes the power of Pledges of Allegiance to connect with a larger network of organizations facing the same battles. “The act of raising the same flag with other organizations on the same day unites us, connecting our missions and our audiences with others across the United States.”