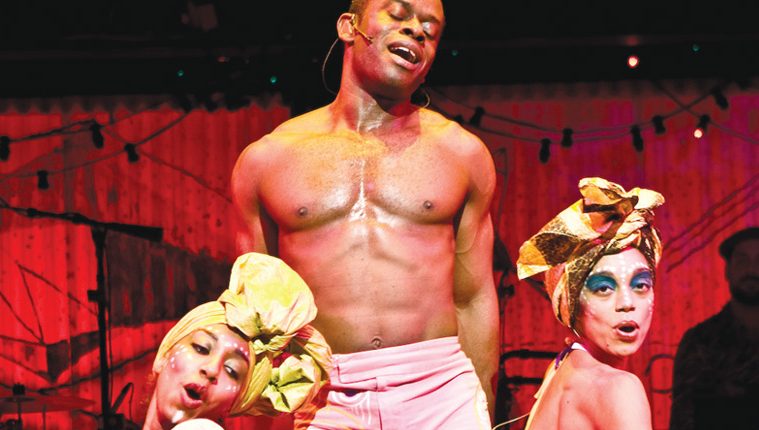 Prepare to gyrate. The Afrobeat is heading to Houston. Fela, the Tony-Award winning Broadway sensation based on the larger-than-life Nigerian musician and activist Fela Anikulapo Kuti, comes to the Society for the Performing Arts stage on June 5-10.

“Music is the weapon” proved the motto for Fela’s life and work. He used music to speak boldly against the corrupt and oppressive military dictatorships that ruled Nigeria.   The musical, set in the late 1970s in Lagos, Nigeria, tells the story of a night at the Shrine, his notorious club adjacent to Kalakuta, his famous compound where he lived with his many wives or, “Queens,” and his personal army. It’s through his music that we learn of his life, family, cause, and the intoxicating Afrobeat.

The musical Fela has special meaning for dance folks. Not just because it’s about a fearless iconic artist who believed that music and dance had the power to heal the world, but also because it was directed and choreographed by postmodern giant, Bill T. Jones, a seminal American choreographer known for his bold themes and daring dances. Jones also won the Tony for his choreography in Spring Awakening.

Fela also boasts a book by Jim Lewis and Jones, music and lyrics by Fela Anikulapo Kuti, arrangements by Aaron Johnson and Antibalas, additional lyrics by Lewis, and additional music by Johnson and Jordan McLean.

I had a chance to visit with cast member Melanie Marshall, who plays Fela’s mother Funmilayo, and dance captain and ensemble member, Jill Marie Vallery. Both testify to Jones’s deep connection to his subject and the performers.

“Jones is an unbelievable talent,” says Marshall, who joins the national tour from the London cast. “He makes you go beyond what you think you are capable of, and uses what you bring to the production. He added five notes to the top of my range.”

Marshall had not heard of Fela when a friend told her, “I’ve seen your next job.” After a few hours on Youtube, Marshall was hooked.  “The show grabs you from the first second. Its concert feel gets you grooving straight away. Once Fela ignites, the flame just keeps getting brighter.”

From the Broadway production of Fela, courtesy of Society for the Performing Arts.

A classically trained singer, Marshall soars as Fela’s inspirational mother, a feminist and human rights activist, who appears from the afterlife as a beacon of reason in Fela’s conflicted life. “It’s Funmilayo who introduces Fela to the works of Martin Luther King and Malcolm X,” says Marshall. “She instigates many of his beliefs.” Marshall’s two big anthems, “Trouble Sleep” and “Rain,” anchor the show.

Vallery’s connection to the show goes back to the beginning when the show was in its workshop phase in 2006. She’s traveled the distance from off-Broadway to Broadway, followed by a European tour, and then to Nigeria, where the cast was greeted with an overwhelming outpouring of love. “To bring this man and his music back to Nigeria was an amazing experience,” she says. “When Fela would sing, the whole audience would respond.”

Vallery is now traveling the country performing and making sure all of Jones’s fabulous choreography stays intact. “It has evolved over the years though,” Vallery adds. She describes Jones’s choreography as a blend of African, post modern, and contemporary. “Dancing is 95% of the show. We compliment all of Fela’s songs,” says Vallery. “The audience gets to see a new form of dance.”

Because the show is so interactive, no two shows are the same. “Every night is a new experience. The energy of Fela’s music drives you to an out-of-body experience,” she says.  “It’s been quite a ride.”

Marshall agrees, and has some advice for the audience. “Come open, be ready to dance, and soak it all in.”