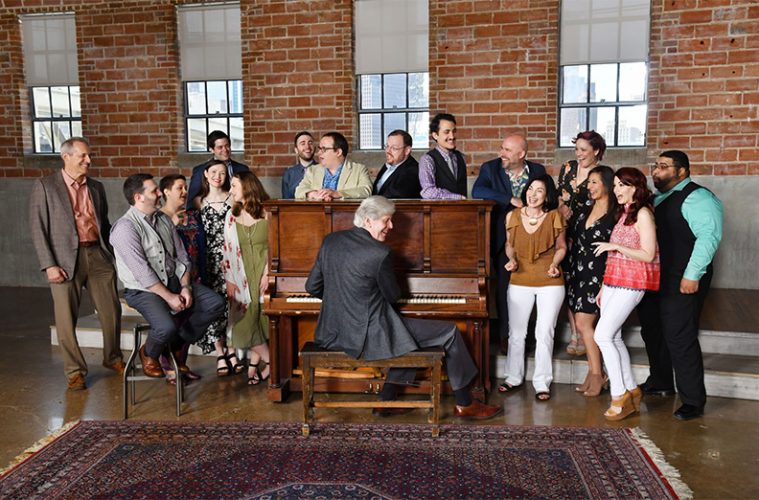 Why We Sing: Houston Chamber Choir Celebrates the Art and Joy of Singing Together 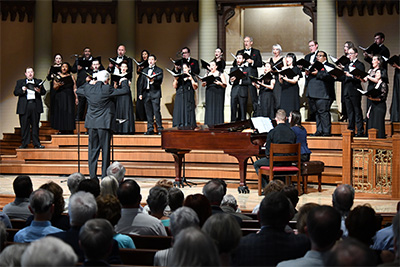 Robert Simpson, founder and artistic director of the Houston Chamber Choir (HCC), has just brought home one of the most coveted awards in the field of choral music. The 2018 Margaret Hillis Award for Choral Excellence was officially presented to the HCC by Chorus America at its conference in Chicago in June. Simpson beamed with pride, “This award puts us in a category I have aspired to for 23 years, since we became a professional choir in 1995.”

In his acceptance speech, Simpson paid tribute to all the musicians who have grown with the ensemble over the years. “We are not a project choir with a roster of hired professional singers from different parts of the country,” he explains. “We are a resident company. Everyone lives in the community. We start in late August and continue rehearsing week by week throughout the season. That really gives us a chance to live together, to get to know each other, to be a family.”

It is the perfect time for a season dedicated to the “Art and Soul” of the HCC experience. “We want to express how we make music,” says Simpson, “how deeply we care about unlocking the emotional power behind the pieces we sing, transforming pretty into powerful.”

The opening concert “This is Why I Sing” (Sept. 29), makes a defining statement for the entire season. It is all about the pure joy of singing choral music, highlighting favorites of the singers as well as requests from the audience via online submissions. Simpson is especially happy to have the Kinder HSPVA Choir and the Parker Elementary School Advanced Choir join forces with the ensemble. “The love of singing starts early and is nurtured throughout the high school years. I wanted the faces of 4th and 5th graders on stage because they just radiate this love that over time and hard work develops into voices who sing in a professional ensemble.”

For its ever popular Miller Outdoor Theater engagement (Oct. 27), the chamber choir will step outside of the more expected classical repertoire and get the joint jumpin’ with the greatest hits from the Big Band era. Don’t be surprised to see this multi-talented group break out their dance moves in The Andrews Sisters’ “Boogie Woogie Bugle Boy,” or grooving to the beat of Duke Ellington’s “Take the A Train.” 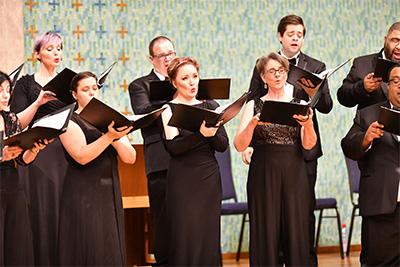 Simpson likes to talk about the sense of continuous flow and overall arc in programming the season. Concerts that would be just right in the middle of the season might feel abrupt at the beginning. So it is with the rarely performed gem by 20th century Italian-American composer Gian Carlo Menotti, The Unicorn, the Gorgon, and the Manticore (Nov. 18). This charming and tuneful large-scale work, with its fantastical title taken from a 16th century madrigal comedy/morality play, will feature singers, dancers, instrumentalists, and costumes, semi-staged to dramatic effect. “There will be much more going on here than in our first concert, where every song is immediately familiar,” Simpson notes. “The visuals, the movement–it’ll take much more focus and concentration.” How can a story of a strange poet who keeps mythical creatures as pets not intrigue and enchant the listener?

The magic continues as the chamber choir celebrates the Christmas season with five concerts at the beautiful Chapel of the Villa de Matel, this year with the added gift of a collaboration with Houston’s well-established Apollo Chamber Players.

Variety is a hallmark of HCC. It is very seldom for the choir to repeat a piece or an experience. Simpson wants people to come wondering “Ok now, what’s this all about?” For the audience, there is a sense of the unexpected and new. “At the same time,” muses Simpson, “there is a sense of discovery that feeds my soul and the singers’ as well.”

With an abiding love for all styles of music, and because he just can’t get enough of variety, Simpson invited Grammy award-winning jazz singer Kim Nazarian, founding member of the New York Voices, to work with the chamber choir for an entire week, culminating in an evening of cabaret-style jazz at the relatively new venue Ballroom at Bayou Place (Feb. 3). The choir has had great success working with jazz greats Christian McBride and Dave Brubeck in the past. However, those collaborations came toward the end of the rehearsal process. Nazarian will go deep into the idiom with the ensemble. Eyeing a possible Pops Season in the future, Simpson wants the group to be thoroughly versed in the nuances, traditions, and conventions of vocal jazz. “I want us to be very, very grounded rather than just making it up,” he said earnestly. “We really want to know what we’re doing!”

HCC has collaborated with just about every arts organization in Houston, and this season it will add the venerable new music collective Musiqa to its list of artistic partners. The performance of Tarik O’Regan’s Mass Observation (2016), for choir and six percussionists, could not be more timely in this era of growing concern over surveillance techniques. The name refers to an official English government program in the 1930s that sent individuals out to eavesdrop on private conversations in order to gauge the mood of the country just prior to King Edward’s abdication. Houston Grand Opera will be presenting the world premiere of O’Regan’s opera The Phoenix around the same time as HCC’s performance of Mass Observation (April 13). Simpson will be looking forward to having the composer in the audience for the work’s regional premiere. Also on the program are works by esteemed Musiqa composers Karim Al-Zand and Marcus Maroney. Al-Zand’s A Measure in Trance uses text by the ill-fated Arab prince and classical poet Ibn Al-Mutazz (861-908 C.E.), while Maroney’s a cappella piece Im Grase is a setting of German romantic poet Annette von Droste-Hülshoff’s poem of the same name.

The season will conclude with another major collaboration, this time with a scholarly bent (May 18). University of Houston professor Jeffrey Sposato, a 19th century choral music specialist, has a book hot off the press titled Leipzig After Bach, bringing to light the music of composers overshadowed by the brilliance of their predecessor at Thomaskirche. These names will be unfamiliar to even the most seasoned listeners–Johann Doles, Johann Hiller, Johann Schicht, anyone? With Sposato’s scholarship and musicianship as guide, Simpson is confident this music will come to life in performance. “We are not a choir that specializes in any one period or genre,” he adds, “but when we sing music of a particular period, I want us to sound like specialists. It is one thing to do a project like this, but another to do it with real understanding.”

One last thing, and in Simpson’s mind one of the best and most important things that HCC does, is the annual invitational choir festival Hear the Future (Jan. 27), now celebrating its 20th year. Three high school choirs, selected from the area’s finest choral programs, will be invited to sing at the festival, each performing its own program and alongside the chamber choir. This year the festival will expand to include a clinic led by Dr. Rick Bjella, artistic director of the San Antonio Chamber Choir. Eight Title I high school choirs, choirs that have fewer resources and opportunities for this kind of coaching and expert guidance, will be invited to participate. “It is so important to recognize the educators who create that initial spark,” remarked Simpson. “The choral world is a world built around passion. It’s all to do with the love of the art.”

And that is the Art and Soul of it.