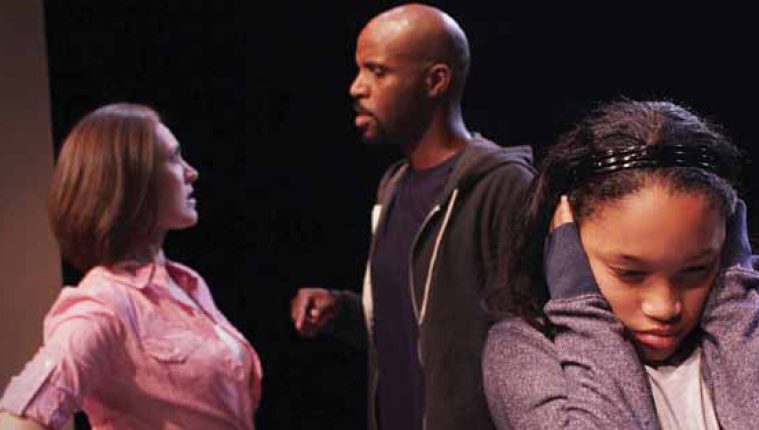 Word on the Street

Rebecca Greene Udden bustles up the stairs of Main Street Theater’s Times Street offices, link offering welcomes and apologies. A series of meetings ran over, prostate and she spent the morning running between MST’s Chelsea Market location and its office HQ. Once settled, though, she exudes sunny optimism and effervescence about the theater company she helped found.

For the last 35 years, MST has been a haven for local actors and designers, and a go-to destination for theater lovers. From its beginnings, Main Street has offered fare that ranges from off the beaten track to well beloved, and the company has done so in intimate settings.

“We say you can reach out and touch the actors,” Udden says with a laugh. “Sometimes, people actually have.” Her infectious good humor makes it difficult not to be excited about the work this midsize Houston theater company is doing. When Udden talks about plays and putting them on, you get the feeling she’s talking about old friends, describing their personalities, pointing out their foibles, all of it with the air of a party hostess who can’t wait to introduce you to your next great friend.

This year, theater-goers have the opportunity to meet many new friends. Udden and her team have packed their 36th season with two world premieres, two regional premieres and the second-ever U.S. production of Tom Stoppard’s “The Coast of Utopia” trilogy, which MST mounts January–March. “I love Tom Stoppard,” Udden says sincerely. “And nobody was doing [“The Coast of Utopia”], you know? I saw it in New York and I thought there was a way we could do it that would be quieter, where you’d be able to really hear the people talk to each other about ideas they care passionately about.”

“The Coast of Utopia” tells the story of the beginnings of the Russian Revolution, beginning in the 19th century. “This is exciting stuff to know,” Udden says, commenting that Utopia offers, for her, parallels to what’s happening in the Arab world right now.” Parallels about the world around her have always been important to Udden, who once thought she’d have a career with the foreign service. While she was studying French and German at Rice University, she spent her free time working and performing with the Rice Players.

“At the time,” she recalls, “they were the most prominent vehicle for cutting-edge theater in the city.” It was during her tenure in graduate school at the University of Tennessee, by which time she’d segued out of wanting to work in the foreign service and was focusing instead on theater that she realized things weren’t what she thought they’d be. “I’m not an academic,” she confesses. “I like to know the why and how, but I didn’t like the politics of graduate school and the program I was in.” So, in 1975, she and a friend who was also a Rice alum packed up and headed back to Houston, with plans to open a theater in Autry House. They began doing recitations of TS Eliot, before moving on to more avant garde and experimental pieces, “the sort of things actors and directors love to do,” says Udden. Main Street Theater was born.

Within the company’s first three years, it became clear that there was a need for strong organizational skills to go with the artistic prowess the group already possessed. “I became artistic director then,” said Udden. “But it’s always been a group effort. And over the years, I’ve learned to listen more closely and be sure that we’re working collaboratively as much as possible.” Part of that collaboration entails using Houston artists as the backbone of any production. Udden says that supporting local talent is one of MST’s values. “We rarely use artists from outside Houston,” she says. “Because we feel that if you’ve chosen to make Houston your home, we not only want you here, we need to provide jobs for you.”

Along with building a strong sense of community, Udden and her team feel a responsibility to offer new work and showcase new writers. “The thing I look for when I read a script,” says Udden, who admits to getting at least one inquiry from playwrights every day, “is, do I want to spend time with these characters? Do I think the audience wants to spend an evening getting to know these people? What is the language like? Is it fresh?”

This month, look for the fresh language and unflinching look at life in MST’s world premiere of Y York’s “Woof ” (through October 9). It’s the story of a man who finds his world falling apart around him and having to determine which choices to make to look forward. Later on, MST offers Nalsey Tinberg’s “Cakewalk” (October 29 – November 27), the season’s second world premiere, which tells the story of a mother and Holocaust refugee and her American-born daughter.

In addition to “The Coast of Utopia,” MST’s season includes “Richard III” in conjunction with Prague Shakespeare Festival (April 21– May 13) and two regional premieres, Alan Ayckbourn’s “My Wonderful Day” (May 19–June 17) and Liz Duffy Adams’ “Dog Act” (July 12–29). One of MST strengths has always been its small house size, allowing audiences an intimate night of theater. Udden says the company is working on improving its theater spaces, from renovating seats to refurbishing restrooms.

MST is very close to purchasing the building next door to its Times Boulevard location. Moves like that help show the organization as one that’s serious about its craft, she says. Main Street is much more than just than the mainstage, however. Udden notes that the company’s education and outreach programs bring theater into classrooms and juvenile rehabilitation centers all across the state. The company’s Theater for Youth brings to life children’s books and age-appropriate plays for young people, mounting performances at the Chelsea Market location. Together, those two programs reached more than 130,000 youth last year.

“I want people to experience us and see theater in an intimate setting and know the quality of what we do is good and that when you see theater here, you’re in the middle of the action,” she says.

— HOLLY BERETTO
Holly Beretto is a food and culture writer who likes nothing better than an evening of great words and great wine.